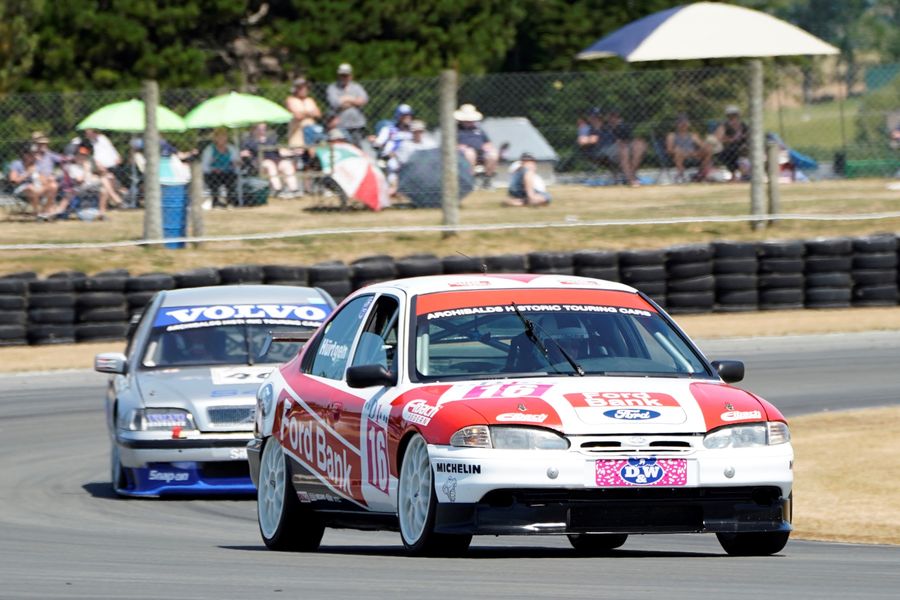 Ford Mondeo Super Tourer driver Scott O’Donnell made it three different winners from the three Archibald’s Historic Touring Car races at the opening round of the 2020 New Zealand series at the big Trust Aoraki Thunder Down Under motor racing meeting at Timaru’ Levels Raceway this afternoon.

Fastest qualifier and Saturday race winner Stu Rogers (Nissan Skyline BN-R32 rep) was again first away in the final 6-lap Archibald’s series race of the weekend but tumbled down the order when he had to do a pit drive-through at the end of the second lap after falling foul of the rules associated with getting to the grid on time.

Scott O’Donnell, driving a rare Wolf Motorsport-built Mondeo Super Tourer based on a 5-door hatchback rather than the more usual four-door sedan model, started the race from the second row of the grid and after being elevated to second place when Rogers slowed to enter the pit lane to serve his drive-through penalty, quickly closed up on and passed second quickest qualifier, Sat race runner-up and Race 2 winner Arron Black (BMW E30 M3 Gp A) for a lead he would never lose on lap 3 of 6.

Black remained in second place until lap 4 when he spun, allowing Scott O’Donnell’s Volvo S40-driving uncle, Lindsay, through into second, and – albeit briefly – local ace Kevin Pateman (NZTC Ford Telstar) up to third.

When the chequered flag came out the order was Scott O’Donnell first, Lindsay O’Donnell second then Arron Black third, having dispatched Kevin Pateman back to fourth, then a gap back to Stephen Grellet (Peugeot 406 ST) from Dunedin in fifth and – amazingly – Stu Rogers back up to sixth place. 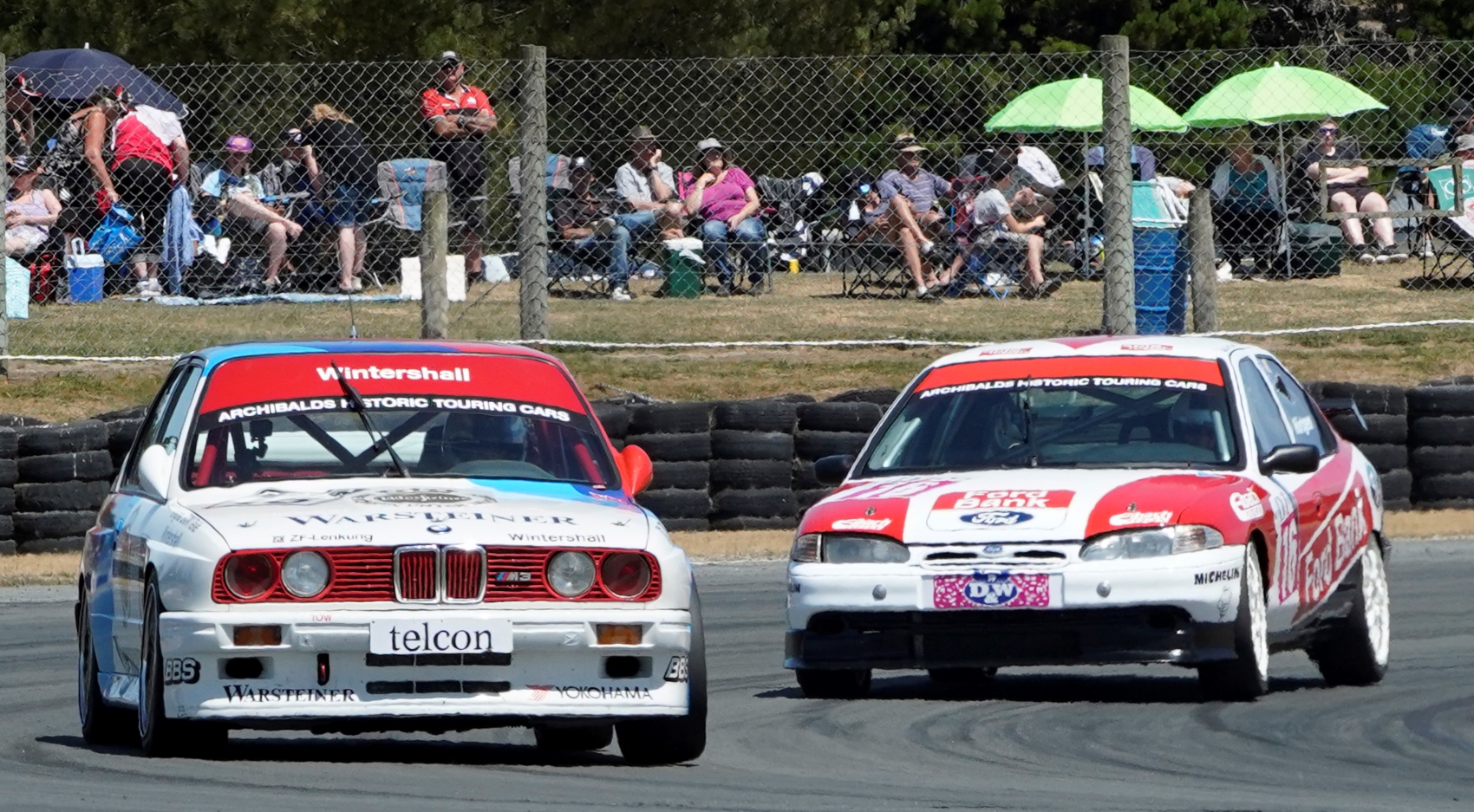 Consolation for Rogers, the Amberley motorcycle mechanic who has lovingly and at great expense recreated a Godzilla-era 4WD R32 Nissan Skyline from scratch, came with a third fastest lap in as many races, though the time, a 1:07.561, was not quite as quick as the – frankly incredible – 1:06.774 he recorded in the second Archibald’s series race this morning.

That race was another cracker, with victory - this time - going to the Gp A BMW E30 M3 of Arron Black from Stu Rogers in his Skyline and the Ford Mondeo ST of Scott O’Donnell.

Rogers and Black battled mightily early on, but as they swapped the lead repeatedly over the first three laps they allowed Scott O'Donnell not only to catch up after he had passed Ford Sierra RS500 Cosworth driver Brett Stevens, but to join the fun as well.

O’Donnell found  a way past Rogers for second place on the third lap and held the place until Rogers wrestled it back off him on the fifth, setting the 1:06.774 lap as he eased away to shore up second place.

Not surprisingly by the time the chequered flag came out, Black, Rogers and Scott O’Donnell had edged away from the rest of the field, led by Lindsay O’Donnell in his Volvo S40 ST and including Brett Stevens whose Sierra Cosworth was slowed by an engine misfire which would see the Motueka man withdraw early from the third race, and Stephen Grellet.

Grellet spent much of the race trying to find a way past Kevin Pateman and did so on the last lap, earning sixth spot for his endeavours.

Liam McDonald enjoyed another good run in the ex Team Kiwi/Jason Richards’ Nissan Primera to cross the finish line in eighth place and in sight of NZTC-category pacesetter Pateman.

The only driver who ran on Saturday not to start either Sunday race, in fact, was Murray Sinclair, the Christchurch man electing to park his Nissan Primara Super Tourer after failing to get to the bottom of a problem with his car’s power steering system overnight.

The first Archibald’s Historic Touring Car Series race of the 2020 season (on Saturday) was won by fastest qualifier Stu Rogers; but not before he and eventual runner-up Arron Black swapped the lead early on.

Brett Stevens and Scott O’Donnell were also in the hunt, the foursome entertaining the large and enthusiastic crowd with the final podium positions not settled 100% settled until the chequered flag came out.

Kevin Pateman was once again the best of the drivers running NZ 2 Litre TC-spec cars, setting the fifth quickest lap time in qualifying then running as high as fifth in the race until dispatched back to sixth by Lindsay O’Donnell.

Series returnee Murray Sinclair finished seventh, ahead of a fast-finishing Stephen Grellet who caught and passed Liam McDonald for eighth on the final lap.

The Archibald’s Historic Touring Cars joined a number of other high profile racing categories on a packed Thunder Down Under programme at Levels Raceway over the weekend. 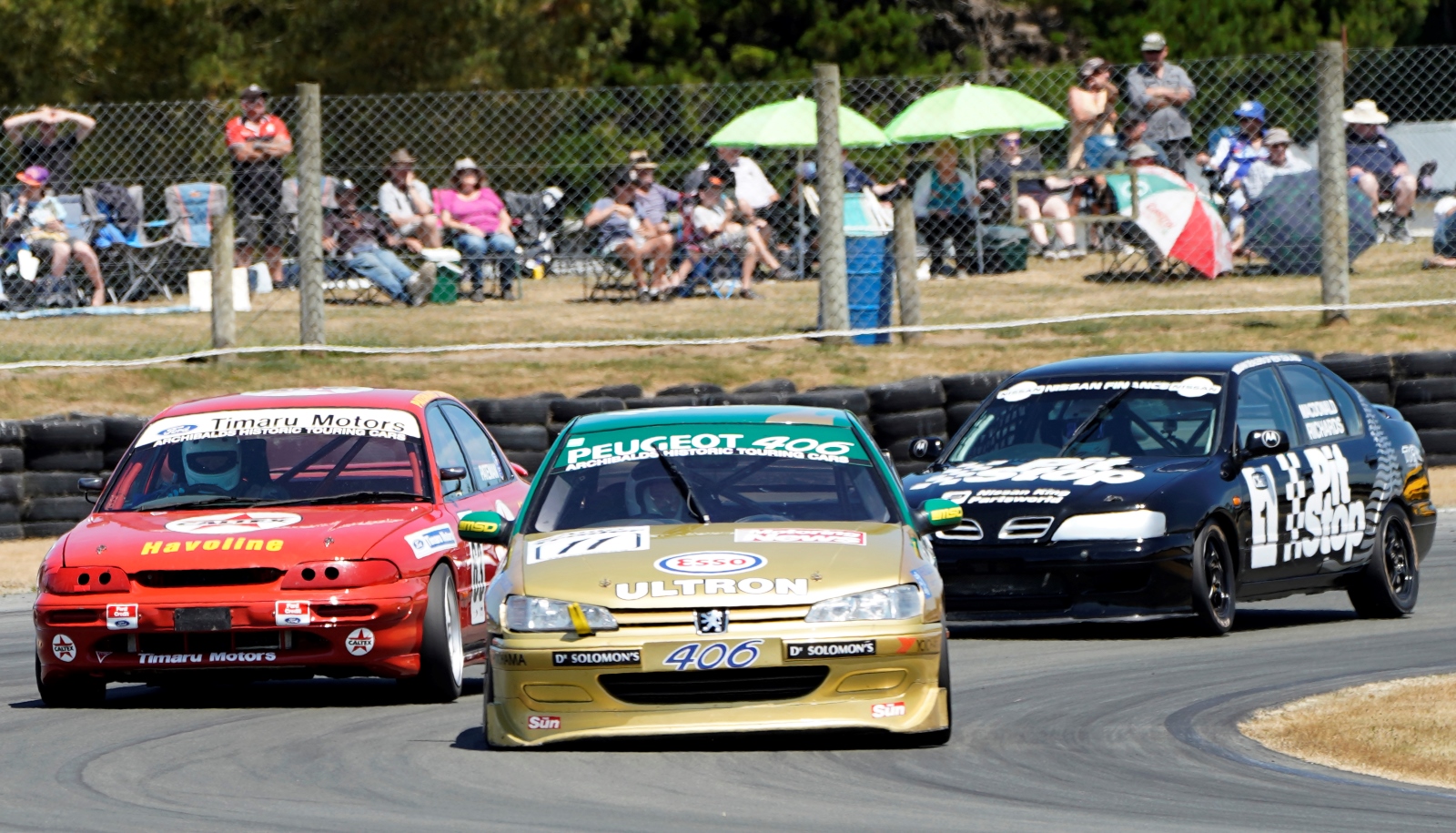