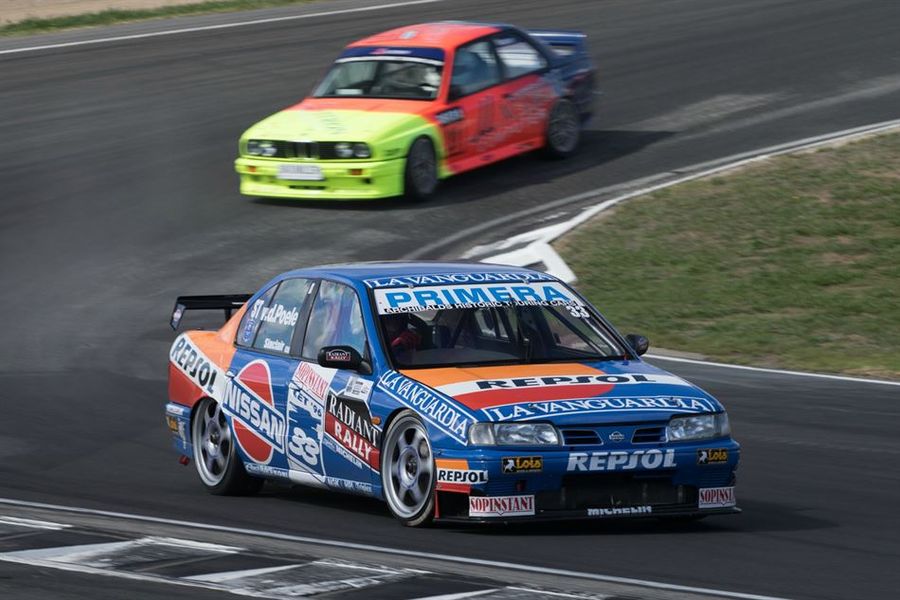 The combination of stars and cars proved a winning one for the new Archibalds Historic Touring Car class at the big 4 Guys Autobarn Legends of Bathurst historic motor racing at Hampton Downs over the weekend.
Queenslander Charlie O’Brien set the quickest lap time in qualifying and made it three wins from three starts for a perfect category (and front-wheel-drive) debut in Association Chairman Murray Sinclair’s Nissan Primera Super Tourer. But the Aussie Touring Car legend had to work for each win.
In the first two races he was pushed all the way by the hard driven Zakspeed BMW E30 M3 DTM car of Auckland driver Graeme Cameron. Then in the final weekend race which had the large crown on its feet, he had to catch, pass, then keep ahead of the wickedly quick Ford Sierra RS500 Cosworth turbo of Brett Stevens.
Stevens struggled all weekend with overheating issues, but the Motueka man stormed past the Nissan Primera Super Tourer of Phil Mauger and the BMW M3s of local preparation expert Conrad Timms and guest driver Steven Richards to grab the final podium spot in the second Archibalds series race of the weekend on Sunday morning. Then for two heady laps of the final race in the afternoon he led O’Brien, and fellow Australian Touring Car legend Jim Richards.
Graeme Cameron was also in contention for a podium early in the final too but backed out of a potential clash and ended up off the track and classified a lap down once he got back on.
Event special guest Jim Richards ran as high as third in the final only to break a half shaft in the beautiful Peter Sturgeon-owned Group C BMW 635 CSi just one corner from home on the final lap and ned up classified as a dnf.
A fuel issue, meanwhile, paid to local legend Paul Radisich driving the NZ 2 Litre Touring car now part of a Radisich car collection owned by Invercargill man Scott O’Donnell. But after resolving fuelling issues with his own ex Radisich BTCC-spec Mondeo in the morning race O’Donnell finished the final in tenth spot, just two places back from his uncle, Lindsay O’Donnell who owns and drives the ex-Rickard Rydell,/Jim Richards Bathurst 2 litre race winning Volvo S40 Super Tourer.
Seventh in each race, meanwhile, was racing newcomer Stu Rogers from Christchurch in his Nissan Skyline R32.
The locally-built Skyline is just one of a number of diverse models eligible for the Archibalds Historic Touring Car Series class and all the drivers were buzzing after the final race on a scorching hot Sunday afternoon at Hampton Downs.
John Bowe summed up the feeling by saying that the meeting was quite possibly the best he had ever participated in.
“Honestly,” he said, “I think I enjoyed it as much as I have enjoyed any other motor racing meeting in my life and believe me, I have been to a lot in my time.
“Obviously, on the track I had some really good battles with various people which was fun because there were a lot of different types of cars out there. But it was more than that. The whole thing of being here. It’s just such a terrific track with really good facilities. The people who run it are just so good, so welcoming, so  accommodating, and he people who have come to see us have been so nice. The whole thing has just been fantastic.”
Earlier in the day the big story in the second weekend race was the photo finish with Brett Stevens in his ex Kevin Waldock Ford Sierra Cosworth grabbing third place literally on the start/finish line from Phil Mauger and Conrad Timms and Steven Richards.
Stevens was the big mover mid race, setting the third quickest lap of the race, as he worked his way into what turned out to be podium contention with a final turbo-boosted burst out of the final sweeper and up the hill to the start/finish straight.
Heading into the final lap it was Steven Richards who looked like he was safe in third until be was caught and eventually swallowed up by Stevens, Mauger, and Timms.
“I had a couple of missed gears, and the guys behind me caught up and in the run to the line we got gobbled up!”
In the first race of the weekend on Saturday Charlie O'Brien set the tone for his winning trifecta after an early challenge from Cameron
Jim Richards completed the podium in the beautiful black BMW 635 CSi Group C with Phil Mauger fourth and John Bowe in the Mark Petch-owned Volvo 240T fifth.
The Archibalds Historic Touring Car Series now head south for rounds at Taupo next weekend and Christchurch and Invercargill’s Teretonga Park in February.
Race 2 (Sun 6 laps)
1. Charlie O’Brien (Nissan Primera) 10.42.342
2. Graeme Cameron (BMW M3) +0.369
3. Brett Stevens (Ford Sierra Cosworth) +10.055
4. Phil Mauger (Nissan Primera) +10.144
5. Conrad Timms (BMW E30 M3) +10.207
6. Steven Richards (BMW E30 M3) +10.378
7. Jim Richards (BMW 635i) +15,448
8.. Lindsay O’Donnell (Volvo S40) +15.710
9.  Stu Rogers (Nissan Skyline R32) +19.033
10. John Bowe ( (Volvo 240T) +20.579
11. Arron Black (BMW E30) +23.096
12. Trevor Crowe (BMW 635i) +1.01.094
13. Steven Kelly (BMW E36 320i) +1.01.429
14. Nick Young (BMW 325i Gp A) 1.02.386
15. Simon Crampton (BMW E30 M3) 1.26.975
16. Warren Good (BMW E36) +1.28.123
17. Graeme Clyde (BMW E36 320i) +1.28.920
DNF: Austin McKinley, Scott O’Donnell, Angus Fogg, Paul McCarthy & Julius Coffey.
Race 3 (Sun 6 laps)
1. Charlie O’Brien (Nissan Primera) 10.59.144
2. Brett Stevens (Ford Sierra Cosworth) + 0.459
3. Steven Richards (BMW M3) +2.464
4. Phil Mauger (Nissan Primera) +2.851
5. John Bowe (Volvo 240T) +10.551
6. Conrad Timms (BMW E30 M3) +10.602
7. Stu Rogers (Nissan Skyline R32) +17.634
8. Lindsay O’Donnell (Volvo S40) +19.531
9. Arron Black (BMW M3) +20.050
10. Scott O’Donnell (Ford Mondeo) +38.372
11. Trevor Crowe (BMW 635i) +41.396
12. Steven Kelly (BMW E36 320i) +49.508
13. Warren Good (BMW E36) +1.12.494
14. Simon Crampton (BMW E30 M3) +2.19.274
15. Graeme Cameron (BMW E30 M30 + 1 lap
DNF Paul Radisich, Jim Richards, Graeme Clyde, Nick Young, Paul McCarthy, Angus Fogg.