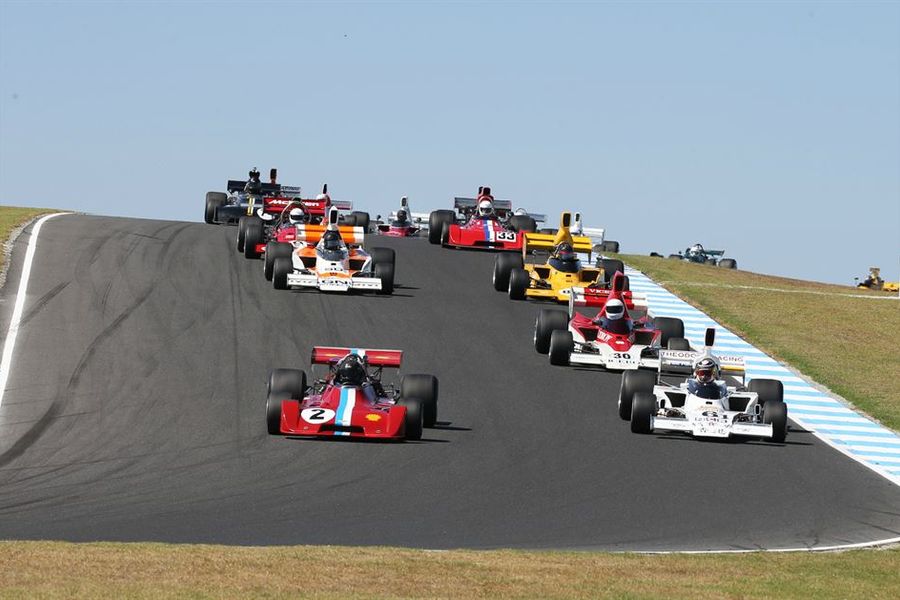 Australia’s Phillip Island circuit proved the perfect venue for the final round of this season’s SAS Autoparts MSC NZ F5000 Tasman Cup Revival Series over the March 10th-11th weekend.
‘This place is just off the scale,” said Kiwi racer Aaron Burson (McRae GM1) after a weekend best second place finish in the feature length 12-lap F5000 category final on Sunday afternoon.
“It’s just so different to what we have at home. And it’s hard to pick one bit that I like more than another, the whole place is spectacular. For a start, at almost 4.5 kms around the lap is a lot longer and it’s got lots of elevation changes which you don’t see from watching the V8s when they are here. That, and all the fast, flowing high entry speed corners means it’s completely different to the other tracks we race at.
“The fact that you’re so close to the sea is also one of the things I like about the place. At any other track all you see down the start/finish straight is the car in front of you. Here, the track dips as you pass the pits, then you crest a rise and then all you see is Bass Strait!”
The circuit, on Phillip Island, due south of Melbourne, could well have been built for the robust, stock-block V8-powered wings-and-slicks Formula 5000 single-seaters.
Weekend pace-setter, former Australian Formula 3 race winner Tom Tweedie (Chevron B24/28), was consistently the fastest man at the meeting, qualifying quickest before going on to win all five category races very much as he pleased and only conceding the fastest race lap once – to compatriot Tim Berryman (Lola T332) in the second race of the weekend on Saturday morning.
Tweedie was the only one to break the 1.27.00 barrier (with his pole time in the Saturday morning qualifying session of 1.26.89251. but both he and Berryman ran easily in the 1.27.00s in the races.
Both also beat the two Formula 1 cars – the March 741 of former V8 Supercars ace John Bowe and the Ferrari 156/85 of Sydney driver Guido Belgiorno-Nettis – which joined the F5000 field for the first race on Sunday morning.

By way of comparison the MotoGP lap record round the Grand Prix circuit is a 1.27.833 set by Italian Jorge Lorenzo, and the current Supercars one - set in 2017 by Kiwi Scott McLaughlin in a Team Penske DJR Ford Falcon -  is a 1.31.2142