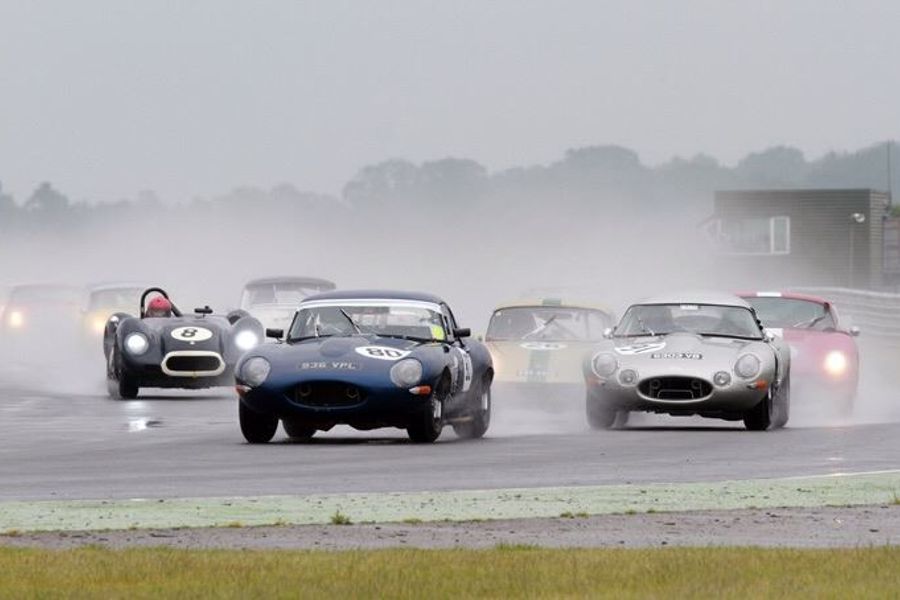 Martin O'Connell mastered tough conditions to win the annual Autosport Three-Hour at Snetterton (13/14 June) during the Historic Sports Car Club's annual race meeting at the Norfolk circuit. The three-hour race is one of the longest classic races on the British calendar and re-creates the Autosport Three-Hour race held at Snetterton  from 1957 to 1964. In period it was won by drivers like Jack Sears and Jim Clark and Sears was on hand at the weekend as a guest of the club to  present the awards.

The 2015 race was run in partnership with the GT and Sports Car Cup and drew an excellent field to the Norfolk track. After three hours of racing, O'Connell took Sandy Watson's E-type to victory over the Shelby  Daytona Cobra of Leo Voyazides and Simon Hadfield. An excellent third overall, on only his second weekend in his E-type, went to Julian Thomas who was partnered by the versatile Nigel Greensall.

In rather better weather on Sunday, Max Bartell and Callum Grant took a  famous Guards Trophy victory in Bartell's Elva Mk7S as they saw off the  challenge of the Chevron B8s. Bob Brooks topped the GT cars in his TVR  Griffith.

Grant featured prominently in two amazing races for the Historic Formula  Ford 1600 Championship. In both races, Rob Wainwright (Elden Mk8) beat  Grant's Merlyn Mk20A in two near dead-heats. On Saturday, the winning margin was four-thousandths of a second and on Sunday it was six-thousandths of a second! Sunday's race ran in honour of preparation ace Rob Fowler who sadly died over the weekend. A minute's silence was held with the cars on the grid and after the race the cars toured slowly back to the paddock in close formation.

In a weekend that celebrated Archie Scott Brown and the Lister marque, Sunday's programme included a race for 1950s sports cars in the name of  Scott Brown and it was won by the mighty Sadler MK3 of Julian Majzub. Three Listers filled out the next three positions. Stephen Bond won the 30-minute FISCAR race in his Lister Bristol.

A bumper Road Sports field contest two combined rounds of the Historic and 70s Road Sports Championships on Saturday and invitation class racer Bruce Weir won twice in his Datsun 240Z. Peter Shaw (TVR Tuscan) was the best of the 70s contenders while wins in the Historic division were  shared by the Morgan Plus 8s of Richard Plant and Philip Goddard.