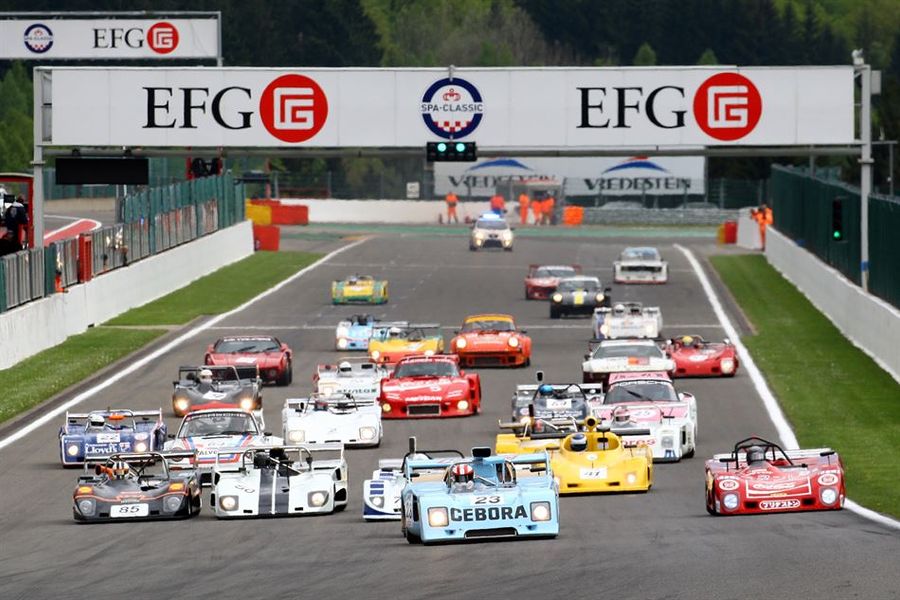 The seventh Spa Classic starts tomorrow at the famous Belgian circuit, second Peter Auto’s race meeting of the season and as ever promising to deliver some great racing on the popular track. It features the usual Peter Auto series – the two categories of Classic Endurance Racing, the Heritage Touring Cup, Sixties’ Endurance, Trofeo Nastro Rosso and the Group C field - and the first round of their new Formula Two series, as well as the guessing Formula Vees.
Classic Endurance Racing aims to provide a retrospective of endurance races held between 1966 and 1981 and the two grids always feature some great cars. CER1 covers GT cars from 1966 to 1974 and prototypes from 1966 to 1971, while CER2 is GTs 1975 and 1981 and prototypes 1972 to 1981, each having a one-hour race.
The CER1 field for Spa features a flashback to the classic days of the 1000km races at the circuit with a brace of Ferrari 512s entered in a wide-ranging 44-car field. Swarms of Porsche 911s and assorted Chevrons make up the rest of the field which includes cars as diverse as a 1964 Lotus 30, several Lola T70s, a GT40 and early 1970s 911 RSRs.
CER2 also benefits from the Spa effect and has a strong entry, with three flame-spitting Porsche 935s, a pair of Lancia Beta Montecarlo Turbos and the regular numerous two-litre Lolas.
The Heritage Touring Car Cup is for cars eligible for the European Touring Car Championship between 1966 and 1984. The Spa entry is dominated as ever by Fords and BMWs, with Escorts and Capris up against 3.0 CSLs and 635 CSis.  Variety in the 38-car entry comes from a a French-crewed Chevrolet Camaro, Mustang with Nigel Greensall part of the driving line-up and a Spanish crewed Alfa Romeo. Also one to watch could be the 1984 Volvo 240T of Andrew Beverley.
Spa has attracted a great Sixties’ Endurance field for their two-hour race with over 80-cars due to be on track. The field of pre-63 sports cars and pre-66 GTs includes Jaguar E-Types, a pair of Listers, and the usual Cobras and Porsches.
The Invitation Trofeo Nastro Rosso sees some classic – and valuable- cars racing under more ‘gentlemanly’ regulations, and this coming weekend the field features seven Ferraris, ranging from two 250 GTOs, via a 250 LM to a three of 275 GTBs. Maserati is represented by a 1957 300s and a T61 Birdcage, with Alfa, Aston Martin, Mercedes, Porsche and two Bizzarinnis rounding off the 18-car field.
The Group C series has a bigger entry than the season-opener at Jarama with 20-cars set to be at Spa. The Jaguar XJR-12 of Shaun Lynn is joined this time out by Chrstophe d’Ansembourg’s potent but sometimes fragile XJR-14, with six Porsche 962s expected out. Six Spices fill out the grid along with cars from March, Rondeau, Toyota, Cheetah, Tiga and Sthemo – the field having two 45-minute races.
The first Euro F2 race has attracted 15-entries, the series open to cars that contested the European Championship between 1967 and 1978. Oldest entries are a pair of Brabhams, Wayne Wilson out in a 1967 BT21C and Tim Kuchel in a BT18 from a year later. Five Marchs from a later era should be among the pace-setters, Marc Devis and Martin Stretton both out in 1978 782s.
Friday sees a day of free practice and qualifying, with more on Saturday morning prior to the opening race, for the Trofeo Nastro Rosso runners, at 12.05. Four more races and track sessions fill out the rest of Saturday.
First race on Sunday is for the CER2 field at 09.35, with another five races across the day. The Group C field race each day.