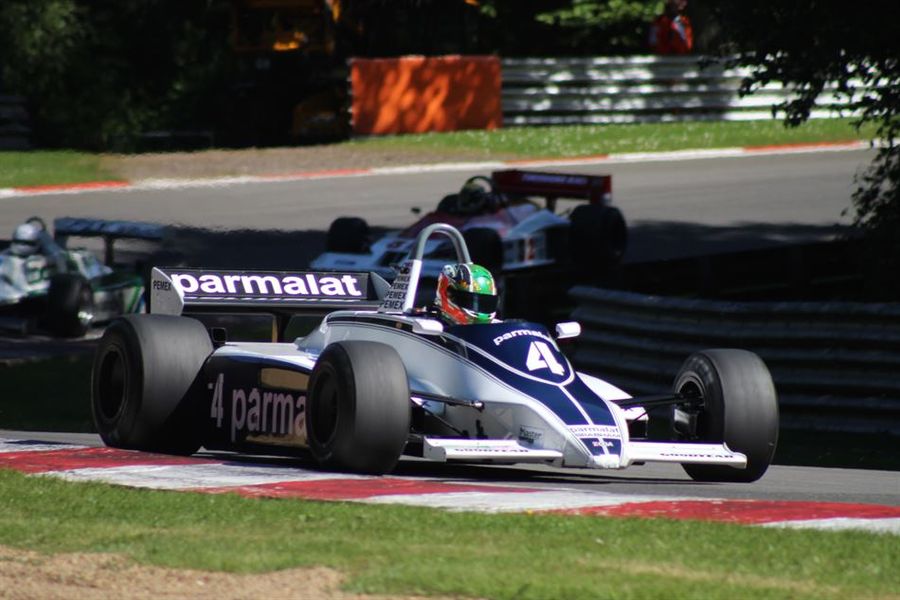 The Formula One field features a 17-car entry the usual wide mix of cars and some quick drivers likely to be at the sharp end of the action in the two 25-minute races, one on each day. Nick Padmore will be quick in the 1981 Williams FW07C, while the slightly newer Tyrrell 012 of the always competitive Martin Stretton will be another front runner.

A delight of the series is that some of the less prestigious F1 marques are well represented, such as the Fittipaldi F5A of Max Hilliard-Smith, Philip Hall’s Theodore TR1 and the Ensign N180 of Simon Fish. Cars that were not always on the ultimate pace in period have benefitted from modern analysis and set-up techniques, such as the Arrows A4 of former champion Steve Hartley.

A strong 27-car entry Historic Formula 2 FIA International Series led series co-ordinator Roger Bevan says it will be a fantastic weekend for the category. “We’ve got a great entry for a track that is so well suited to Formula 2: a proper road racing circuit. It is a perfect fit for Formula 2 to run alongside Masters FIA Historic Formula One Championship.”

Multiple champion Robert Simac heads the F2 line-up in his ex-Jean-Pierre Jaussaud March 712M, a sixth straight championship title. He will be very quick again in the Jochen Rindt class for the 1600cc F2 cars and will aim to get as far up the overall order as possible.

Several drivers stand out as the pacesetters in later 2-litre F2 cars. Richard Evans (March 742) will be the absolute benchmark, but faces opposition from Dean Forward (March 782), Mark Dwyer (March 742), Chris Lillingston-Price (Chevron B40) and Mike Bletsoe-Brown (Chevron B27) who are all established F2 racers.

The one-hour FIA Masters Historic Sports Cars race on Sunday as usual provides an enticing mix of two-litre cars taking on the bigger engined Lola T70s - nimble handling versus outright power. All bar five cars of the 21 strong entry are either Chevrons or Lolas, indicating how those companies were major forces in sportscars at the time – but marques such as Abarth, a pair of early 60s Cooper Monacos, a Dulon and a lone Porsche 911 RSR add variety.

A mighty 42-car Masters Pre-66 Touring Car field makes their race a highlight of the weekend. The field is wide ranging, and dominated by Mini Coopers and Lotus Cortinas, but also features plenty of V8 challengers with multiple Mustangs and a pair of might Ford Falcons.

Names such as Nick Swift and Jonathan Lewis head the Mini challenge, while rapid Cortina exponents such as Mark Sumpter and Steve Soper should keep their cars near the front. The Mustang shared by Henry Mann and John Young could be a factor in the on-hour race, while Jason Minshaw shares Martin Melling’s Falcon and should be worth watching.

A 90-minute Gentleman Drivers race finishes Saturday’s timetable, and offers up a superb field of cars. From Lotus Elans and MGBs to a Shelby Daytona Cobra and a Chevrolet Corvette Stingray, there should be an unforgettable array of sights and sounds for any historic racing fan.

For many people the first appearance on British circuits of the new for 2018 Masters Endurance Legends field for a 40-minute race late on Sunday morning will worth making the journey to Brands for. Providing a home for prototypes and GT cars not always that far removed from modern racing, the field ranges from a 1996 Riley & Scott MkIII in the capable hands of Nigel Greensell up to cars from 2012- a pair of ORECA 03 LMP2 cars and a Lola B12/60 for Steve Tandy.

For many the stars of the show will be a pair of Peugeot 908 prototypes, but also watch out for Travis Engen’s Audi R8, like the Peugeots a model that has won at Le Mans, and Martin Short’s Dallara SP1. Only two GT cars are entered, a Porsche 997 GT3 for Paul Daniels, and a 2008 Aston Martin for Colin Sowter.

Also racing each day is the CSN Groep Youngtimer Touring Car Challenge, a series that offers entry to a hugely diverse range of cars.

Qualifying starts at 09.00 on Saturday morning with the Gentleman Drivers field heading out on track, and the first race that day is at 14.25 for the Masters Endurance Legends.

Sunday starts with a race for the CSN Groep YTCC at 10.05, the track activity continuing until 18.00