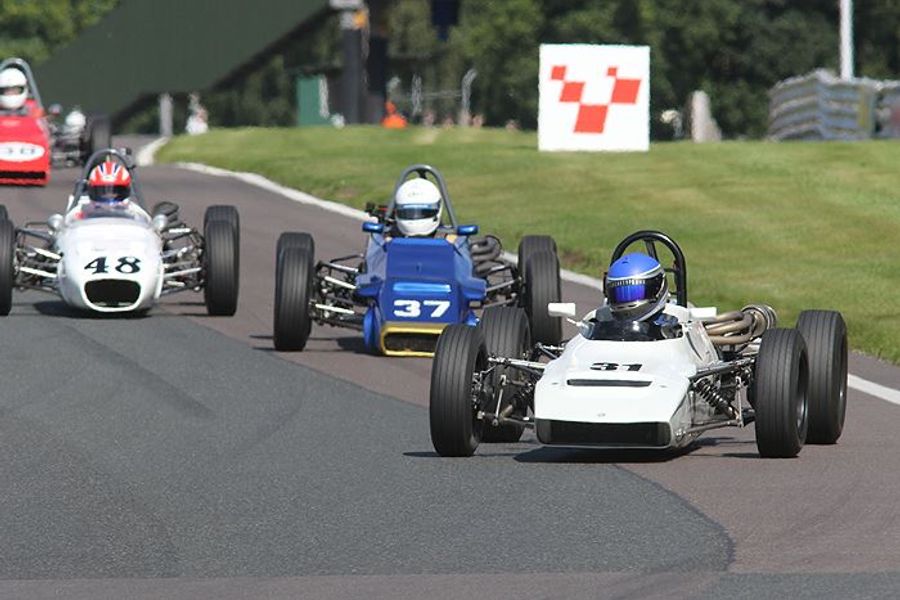 A race meeting at Brands Hatch (Saturday 17th of September) and races within the Classic Six-Hour meeting at Spa-Francorchamps (Friday-Sunday 16th to the 18th of  September) form a busy weekend for the Historic Sports Car Club during its 50th anniversary season.
On the Brands Hatch Indy circuit, four double-headers will form the core of the meeting that also has guest races from the South-Eastern Centre of the BARC. An HSCC Allcomers Closed Wheel double-header completes the busy 14-race programme.
Star billing goes to the Historic Formula Ford 1600 Championship with rounds 11 and 12 of 14 as the title races moves towards a straight fight between Callum Grant and Rob Wainwright. With two races at Brands and the final two at Silverstone in mid-October, it will be a tight finish to a fantastic season of racing. Added to the mix are more potential race winners including Benn Simms, Benn Tilley, Simon Toyne, Ben Tusting and Mark Shaw.
Although he has now sewn-up the 2016 title, Andrew Park will be aiming to extend his remarkable run of victories in the Historic Formula Ford 2000 Championship, which is supported at Brands by Affinage. Benn Simms returns to the series in his Reynard SF77 and will take the fight to Park’s Reynard SF81.
A good grid of cars will contest a double-header for the HSCC Classic Formula 3 Championship and URS Classic Formula Ford 2000 Series. Simon Jackson (Chevron B43) will be aiming to tighten his grip on the F3 title in the face of opposition from the similar car of Richard Trott and the rare Safir RJF3 of Pat Gormley. Ian Pearson (Van Diemen RF83) is the class of the FF2000 pack and will be well up among the more powerful F3 cars.
Two races for the Classic Clubmans Championship will bring out the rapid front-engined sports-racing cars and it is the battle for the Class B title that will be watched with interest as seasoned racers Barry Webb and Clive Wood tussle for the title. Alan Cook and Mike Lane head the more powerful cars in Class A.
An eclectic mix of cars will contest the two Allcomers races at Brands, with James Claridge (Lotus Elan) and Mark Watts (Ford Mustang) likely to be among the frontrunners.
At the stunning Belgian Grand Prix circuit at Spa, a 70-car field will contest two half—hour HSCC races with cars from Pre ’80 Endurance, Guards Trophy, Historic Road Sports, 70s Road Sports and Historic Touring Cars.
Julian Barter will head to Spa with a chance of sealing the 70s Road Sports title. Back at the wheel of Iain Daniels’ Lotus Elan, Barter could do enough in the points’ scoring double-header round to put the matter out of reach of Chris Fisher, who is missing the Belgian trip in his MG Arkley.
Topping the races should be the rapid sport-prototypes of Martin O’Connell/Sandy Watson (Chevron B19), Richard Piper (March 75S) and Daryl Taylor (Lola T390). Meanwhile, for many drivers from the HSCC, the chance to race on this legendary track will be a real highlight of the season.
At Brands Hatch on Saturday, the first of 14 races starts at 11.35am after qualifying from 9am.
At Spa, the HSCC Closed Wheel races will start at 12.55pm on Saturday and at 1.05pm on Sunday, after qualifying at 2.30pm on Friday.
Brands Hatch Historic Sports Car Club during its 50th anniversary Spa-Francorchamps