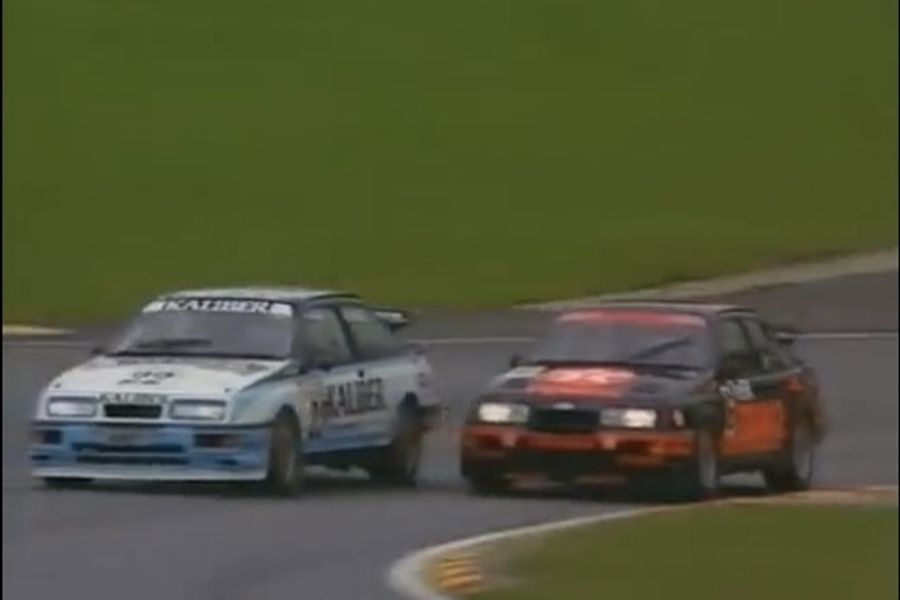 Sadly there will be no Donington Histric Festival this year in its traditional early seaosn date, but driving home from last year's where we had seen Julian Thomas' ex-Andy Rouse Ford Sierra Cosworth RS500 in action set me thinking on the long drive back to Hampshire aboutwatching that car and a whole clutch of RS500s racing in period. When the British Touring Car Championship ran to Group A rules Ford developed the humble Sierra into a 500bhp fire-spitting monster and touring car racing entered a golden age.

The battles at the front of British Touring Car Championship races were superb with the top class dominated by the potent Fords, and the BBC’s excellent coverage with Murray Walker adding his commentary was always a feature of their Grandstand programme a week later, and helped to raise the profile of the series to new heights. It is a testament to his professionalism that the exciting and perfectly paced commentary was usually recorded mid-week, yet still shows his enthusiasm and ability to draw the viewer into he excitement of the race.

One of my Ford Sierra Cosworth RS500 highlights is from 1988, when I travelled with a friend to Brands Hatch to watch the Group C 1000km round of the World Sports-Prototype Championship, with the added bonus of a BTCC race on the Sunday morning before the main event. Adding an exciting element to the race was the appearance of Steve Soper in the Eggengerger RS500 he was racing in Europe - and the race did not disappoint by quickly becoming a battle between Andy Rouse, running an ‘experimental’ engine with more boost, and the Texaco-liveried car of Soper, designed with the longer European Touring Car Championship races in mind.

Sat in the stand at the top of Paddock Hill Bend I remember the race as one of the best I ever watched, with no one sure which car would burst back into our site and into Clearways ahead lap after lap. Watching the video below I was surprised to see there was some rain during the race, something I seem to have mentally erased, maybe due to the excitement of the race, and it was a superb opening act for the Group C Jaguars, Porsches and Saubers to follow.

That weekend was also of note as it was one of the last times I had to pay to get in, at the Group C race next year I was in the ‘press’ room watching and lap-charting as I had 1,200 words to deliver to a magazine by the next day.