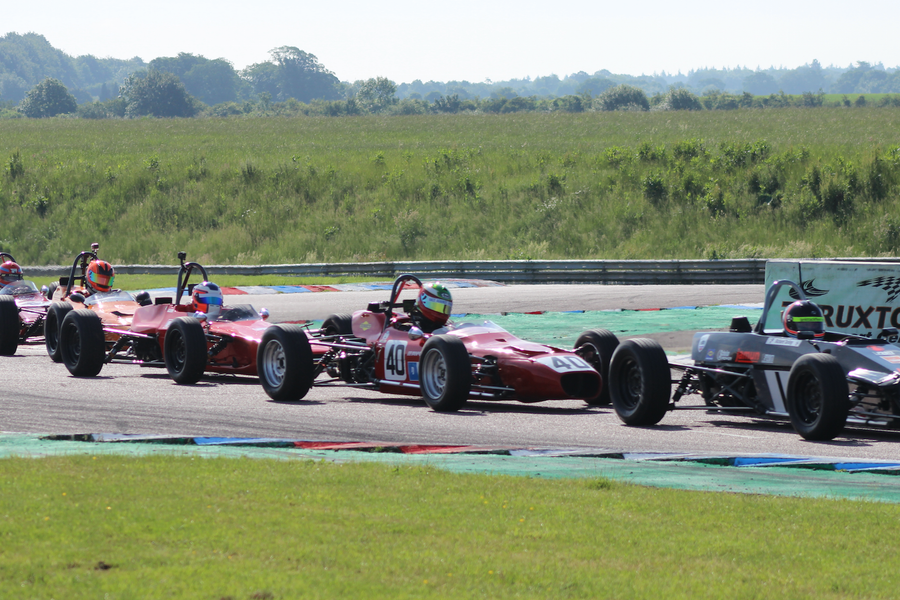 The end of a year often sees you thinking about the highlights of the season just gone, and in previous years for this writer that has been a chance encounter with a driver, the opportunity to enjoy close up a car only previously read about, or even gaining a unique vantage point of a classic event. However, after some thought, this year I realised that my personal highlight was quite simply a race - and one of the most competitive and exciting I had seen in years and one that would have graced any race meeting, not just a historic one.

The 50th Anniversary meeting at Thruxton at the start of June was one I had long looked forward to, having covered the 25th anniversary event for one of the major weekly motorsport magazines and been their ‘man at Thruxton’ for several seasons. A commitment at Silverstone meant I could not be at the Hampshire circuit on the Saturday, but a look at the timetable made sure I was there first thing on Sunday for the opening race of the day.

A delight of Thruxton is how realty unchanged it has been over its 50-year lifespan, the high-speed lap featuring only two heavy braking zones and yet no straight worthy of the name. Starting the days racing was the first of two HSCC Historic Formula Ford 1600 Championship races, the series racing for the Ian Taylor Trophy at Thurston, marking the popular racer who ran the race school at the circuit and lost his life in a saloon crash at Spa.

In the heyday of FF1600 Thruxton always provided great racing, the race either one long slipstreaming pack or breaking up until clusters of closely matched cars, shuffling positions lap by lap. Sone of the real Formula Ford specialists would adjust their gearing in a unique way to suit the demands of the quick lap, sacrificing a low first gear and thus a good stat in order to have four gears more suited to race use.

The HSCC race proved a perfect throwback to that era, a train of cars at the front driven by the likes of Callum Grant, Ben Mitchell, Richard Tarling and even a visiting Tiff Needle, out in his Lotus he campaigned back int he 1970s. The racing was superb, and from my vantage point on the exit to the chicane at the end of the lap the sight of the cars flat in top up Woodham Hill, then fanning out as they reached the braking point to shuffle the order on virtually every lap was awe inspiring, a lead group of seven or eight cars slowing being whittled down over the length of the race.

Richard Tarling led laps seven and eight in his Jamun (shown leading in the title picture), but from then it was either Ben Mitchell or Max Bartell who led the field across the line, Mitchell taking the lead back on the final lap to win in his Merlyn, Bartell’s similar Mk20 second.

The race was a timely reminder that you don’t need high-tech or huge horsepower to have a superb race - just evenly matched cars driven by drivers with the talent and trust to race  closely and competitively with each other, no position easily given up but a rival always given racing room. Whatever has happened over the rest of the day (and some quality racing did follow) that one race would have made the visit, and the meeting worthwhile, Formula Ford 1600 even after all this years proving to be a classic and hugely enjoyable form of racing.

Go on-board with Richard tarling to see the race from a driver's perspective in the video below: