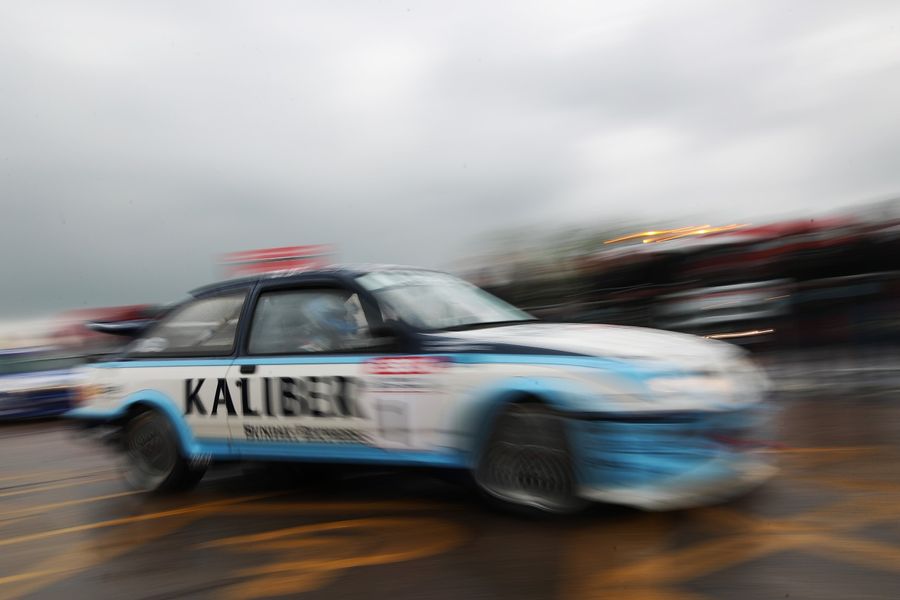 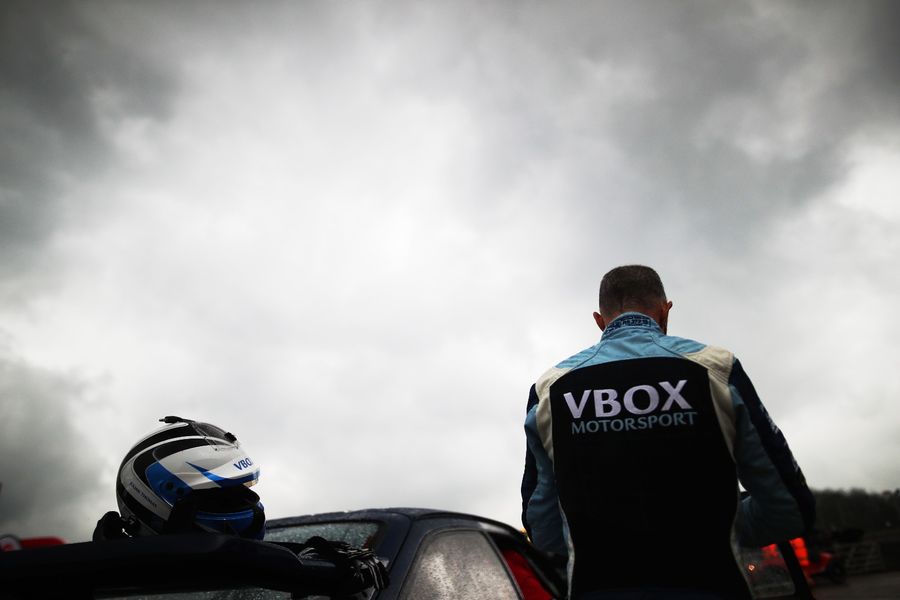 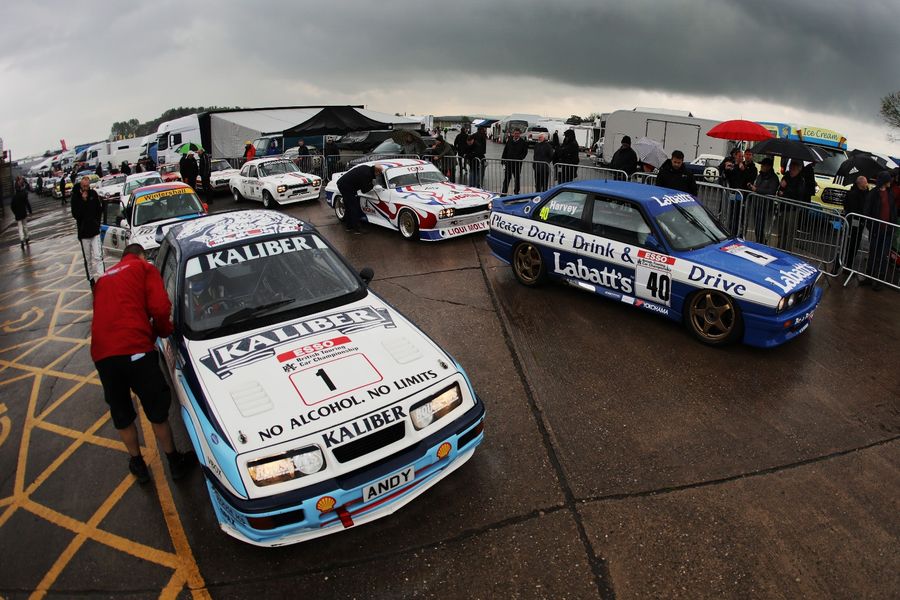 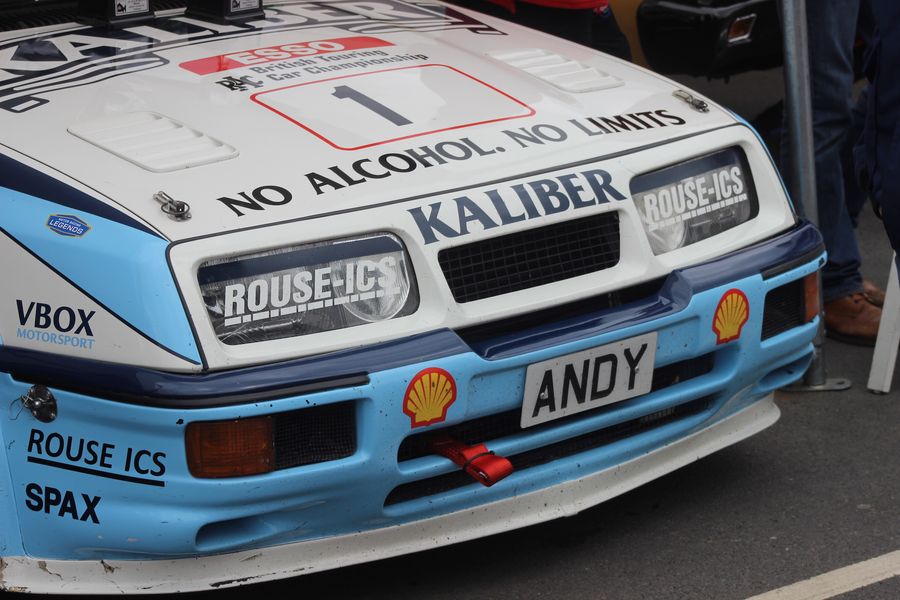 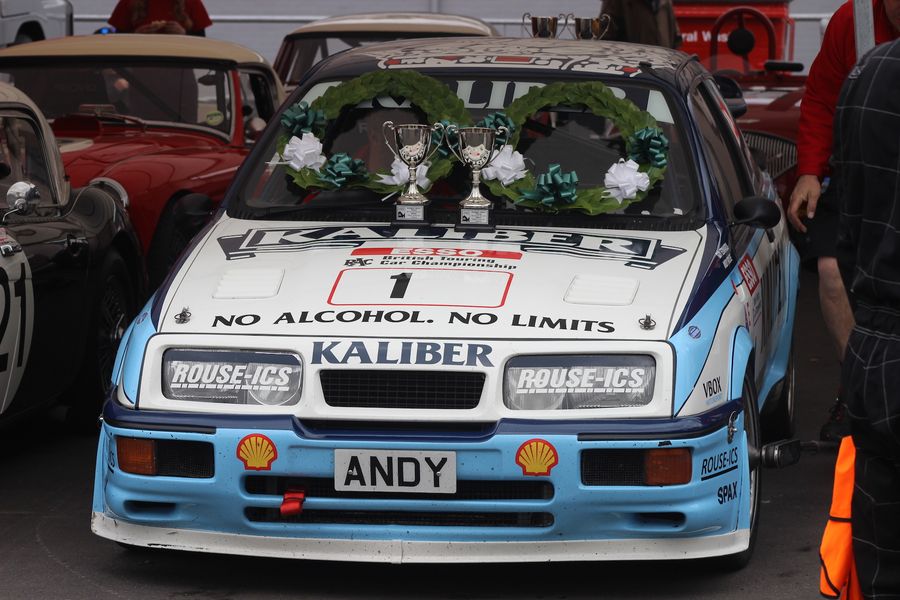 A highlight of the Historic Touring Car Challenge and Tony Dron Trophy race at the weekend’s Donington Historic Festival was the win, after losing places early in the race, of the Ford Sierra Cosworth RS500 of Julian Thomas and Calum Lockie. The car was a true flashback to the heyday of Group A touring car racing in the late 1980s when the potent RS500s were not only the stars  of the British Touring Car Championship but also raced internationally, with stories of the RS500s being able to pass F3000 single-seaters down the straights when testing at Silverstone.

Having been a BTCC fan in that period when younger, Thomas was able to acquire an ex-Andy Rouse Engineering RS500, and with the always quick and reliable Lockie sharing the driving duties, showed what the Kaliber-liveried car could do at Donington.

We spoke to Julian as he stepped off the podium and asked about the car:

“I used to follow the BTCC with my dad in the 1980s and loved this car, that is why I was so happy to see it for sale – I sold everything and bought it! I’ve had it about a year now.

“I sat in it for the first time expecting a race car, and it was just a Ford Sierra! Has the same door panels, wind down windows, and for a moment I thought ‘what have I done?’ We had done all the research on the car and were even able to get Andy Rouse to look over the car just after I bought it and he confirmed that this was the car he had raced at Silverstone and put on pole etc.

“Guy Edwards raced it more than Andy, but he was in it for at least one race, and we think maybe two. He said that at that time they didn’t have a specific car each or nominate one for a set driver, they just took whatever was ready to come out the workshop.

“The first time I drove it was fantastic, I was learning the car and it was a steep learning curve. It is ridiculously fast in a straight line, and that is its strength, but it corners well too, it is very benign. In the race today I hadn’t got the tyres quite up to temperature and while defending understeered off at Coppice, but that was just my inexperience, so I got more heat into the tyres and then slowly worked my way back up.

“As long as you are careful with the throttle it is a nice car to drive. The car came with power-steering but we took that off as it wasn’t used in period, and it had also acquired a brake servo that shouldn’t have been there. The steering gets heavy when you are braking hard and trying to trial the brakes into the corner and the front just wants to push on, you just have to roll off the brakes a little before you turn the wheel.

“It was nice to race some BMW M3s today, just like the car would have done in period. They were really quick in some places and you could see they turned into the slower corners way better, but along the straights I could just say goodbye.

“We are out again with the car at Silverstone in two weeks, then we are doing the Silverstone Classic and a race at Portimao later in the year.”

Formula One on the Streets of Adelaide this Friday