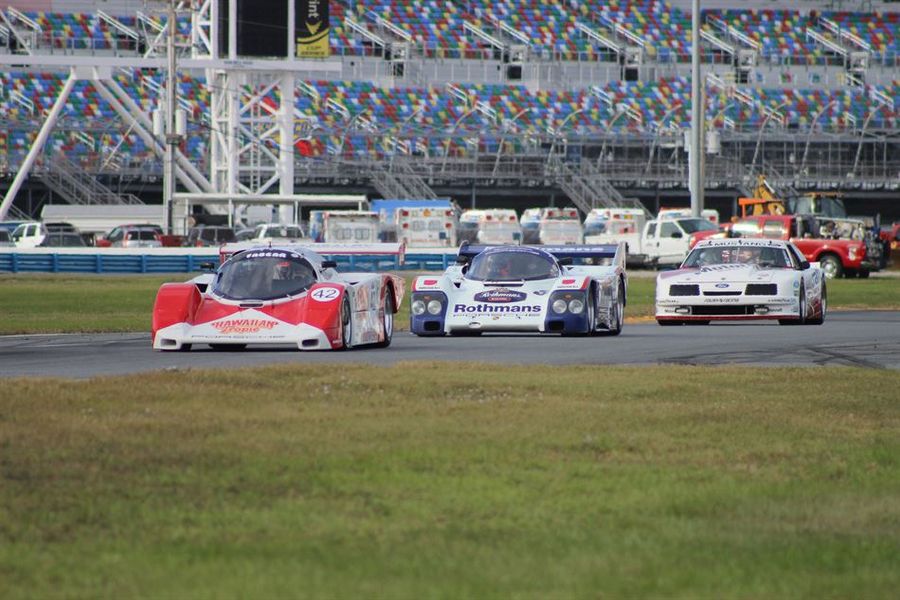 We launched the US arm of HistoricRacingNews.com at the HSR's recent classic 24 at Daytona. Before they pack their bags for Sebring, we asked our team there, who formed part of the circuit commentary team, for their thoughts on this impressive meeting, and firstly Paul Tarsey shares his memories of the weekend:
"I remember my initial reaction many years ago when I first visited the legendary Spa-Francorchamps circuit in Belgium.  In order to gain access to the paddock you have to drive through a tunnel which goes underneath the ‘old’ pits which are half way down the hill from the La Source hairpin.  Just before you drive into the tunnel there, on your left, is the majesty of Eau Rouge.  Then before you know it, you’re in the tunnel and the spectacle has gone.
"I had much the same feelings when I first visited Daytona.  This time the ‘tunnel experience’ is reversed.  Having made an entry through Gate 40 (showing passes to people who must be amongst the most pleasant ticket checkers in the world) you are quickly swallowed by a large tunnel.  As you come out into the Florida sunshine on the other side there is a high wall on your right hand side.  But wait.  There appears to be a Lola T70 halfway up what you thought was a wall but is actually ‘NASCAR Turn 1’ of the race track.  Welcome to Daytona International Speedway.
"One of the first things that hits you is the sheer size of the place.  The main grandstand can seat 167,000…… yes one hundred and sixty seven THOUSAND.  The huge sign over the main part of the grandstand states DAYTONA INTERNATIONAL SPEEDWAY -- World Center of Racing…… there is no question of hiding one’s light under a bushel here.
"We are here to launch the US office of HistoricRacingNews.com and I am accompanied by our Head of US Operations, Jim Roller, and he and I will be providing commentary for the HSR Classic 24 Hours at Daytona.  We are joined by Greg Creamer, an experienced circuit and broadcast motorsports commentator with WEC, IMSA, IndyCar and F1 on his CV.  The fourth member of the team is HSR’s resident announcer, Jeff Wright who has been part of the team for some time and knows his way round an HSR paddock as well as anyone.
"The paddock is huge and is a sight to behold.  Lolas, Chevrons, Corvettes and loads and loads of Porsches of every shape, size and vintage make up the field.  Up at the far end is the TransAm area.  This modern-day series runs the final round as part of this event with their outlandish tube-frame cars.  We vacate our places in the commentary booth for a man who calls himself “The Gorilla” to call the race, referring, during his occupancy of our perch at the top of the Daytona 500 Club building as ‘the gorilla cage’ throughout his stint.
"The Classic 24 Hours at Daytona follows the format of Le Mans Classic.  Entrants are broken down into groups, based on ages (of cars and not drivers) with races of 43 minutes.  This allows for slowing down lap, clearing any cars left out on the circuit and getting a new grid out to start each race at the top of the hour.  A rare treat for your truly was to blag a lap in the pace car in front of a snarling pack of Audi R8s (the proper racing ones, not the road cars), a Pescarolo, Dallaras and so many more, giving me a rare insight into what a race circuit looks like from the other side of the Armco.  Pulling into pit lane whilst this field accelerates up to full speed past you is something I will not forget in a hurry.
"Unlike the UK historic scene, there are few truly ‘old’ cars, by which I mean stuff older than 1960.  For a long time we have seen the value of old cars with provenance go through the roof and racing them has become less and less attractive to investor-owners.  In Europe there is a burgeoning market in exact replicas and the FIA’s policy on Historical Technical Passports has accelerated this.  Providing a car is exactly as the original would have been, that is enough to see it through the HTP process after a good deal of due diligence from the experts.  Many of our high profile events are now featuring new/old cars.  Not so at Daytona.  Most of the cars are original, many with significant history, but there are no races for those fifty year old cars.  Instead HSR has a policy which says that providing it is technically not current they will find a home for it.  In many ways this is the true spirit of historic club racing.
"The final race in HSR’s season happens over the weekend of 2nd/3rd December at Sebring and the well versed team of Roller and Tarsey will be joined in the commentary booth by our old friend Joe Bradley.  We are all used to commentating well into (and through) the night and the problem may be about when to stop.
"Driving into Sebring is not like driving into Spa or Daytona but it’s hallowed ground nonetheless."