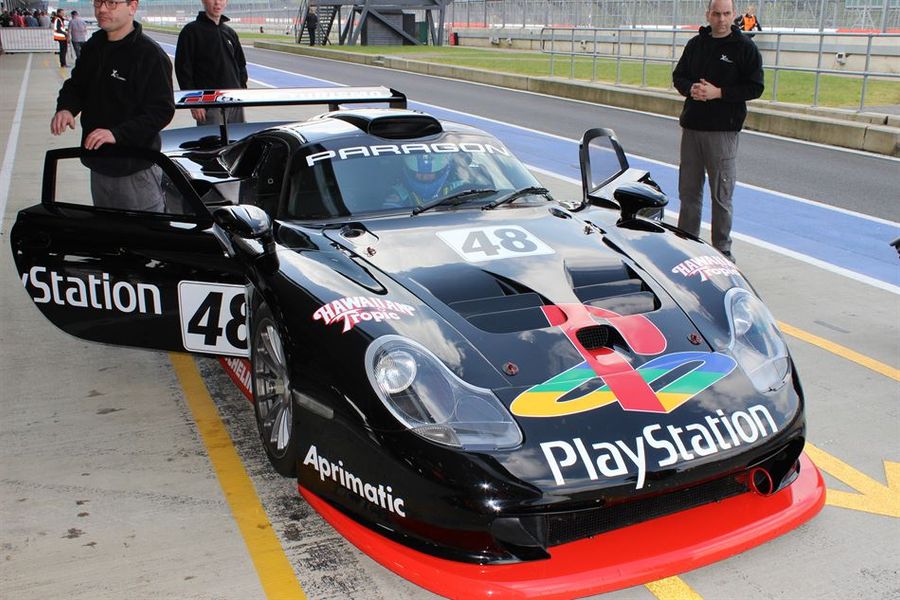 The end of any year is a time for thinking back of past experiences, and in conversation with members of the HistoricRacingNews.com team a few days ago this article sprang to mind. The Silverstone Classic Media Day in 2014 was one of our first outings under the HistoricRacingNews.com banner, so here again is the experience of one of our team on a passenger ride round the famous Grand Prix circuit:
“The Silverstone Classic media day was a major event in itself, the Silverstone ‘Wing’ hosting a press conference and a large number of historic race cars along for the day and some track time. One of the features offered the many press who turned up was the opportunity for a passenger ride round the full GP circuit, in a range of cars ranging from pre-war racers to some pretty potent 1990s GTs and touring cars.
“I duly signed up and got the wristband which denoted me as having signed away any right to complain if anything unfortunate happened while on the circuit, and once the press conference was over promptly headed down to the pits…to be confronted by an already extensive queue in the designated track rides area. This brought into play one of the basic dilemmas of journalism – carry on and wait to try to get some material, or partake of the free buffet.
“At that point I noticed some more activity a little further along, and recognised the car in question – Mark Sumpter’s Porsche 911 GT1. Mark was also doing passenger rides but stopping the classic 1990s GT with his own pit crew, one of whom I realised I knew from Formula Three in the late-90s, Class B champion Martin O’Connell. I was chatting to Martin and watching a few people get out of the car having had a few rapid laps, and was trying to mentally balance out what was undoubtedly a rare opportunity to go out on a circuit in such a full-on racing GT car, with the thought that I had been writing about Mark with my PR head on for a few seasons now and did he have any grudges to settle.
“While stood by the car I caught Mark’s eye and he indicated I could climb aboard if I wanted – so the die was cast and one slightly too small crash helmet later so I was trying to wriggle my 6ft-plus frame in to the somewhat basic second seat. Martin reached in and did up the belts for me – way too tight. Door shut Mark fired up the GT1 and we rumbled our way down the pitlane, and once on the track I was slammed against the rear cockpit bulkhead as 650BHP of Porsche power let rip.
“The straps that felt over tight just seconds ago now seemed way too loose and though I hadn’t realised it at the time in an amateur error I still had my iPhone in my pocket and that was fired out and under Mark’s seat by the acceleration.
“The car was an experience, each gear change saw you slapped in the back by the power and the stopping capability of the carbon-fibre discs left you dangling off the straps. Eye opening was the car’s ability to change direction in the Becketts area of the circuit, Mark flicking it from apex to apex at what seemed ridiculous speed. Mark also has a 962, and commented afterwards the 911 GT1 feels quicker as it hasn’t got the downforce holding it back at high-speed.
“Just to add to the entertainment we were the quickest car out with a mixed-bag of historic cars on the circuit, in some case quicker by a lot. We were passing cars under acceleration, on top-speed and on the brakes, all of which kept out the way other than one Elan as we dived for the Stowe apex who turned in on us – but we must have been a speck in his mirror as he committed to the corner and Mark neatly turned out enough for us to sail by. Down the Hanger Straight for the third time Mark gave me a thumbs up and lifted as he headed for the pits, where I displayed a complete inability to figure out how to get out through the roll cage and had to be plucked out the car by Mr O’Connell.
“Comparing notes with other passengers the word that kept springing to mind was ‘brutal’ – a reminder if what the drivers of these cars go through. I did three laps, what double-stinting at night at Le Mans must have been like I cannot imagine.I also at this time decided the buffet was not for me and that a nice sit down somewhere quiet would be just the thing for a few minutes.
“I spent the week regaling people of tales of my derring-do as a passenger and how I had got ‘special treatment’ as I have known Mark for so long. I met up with him the next Saturday at Brands Hatch where he was racing a Porsche 964 C2 in the Porsche Club Championship and said again what an experience it was, then asked how hard he was pushing.
“Not very,” said Mark, “I’m still getting used to the car…”