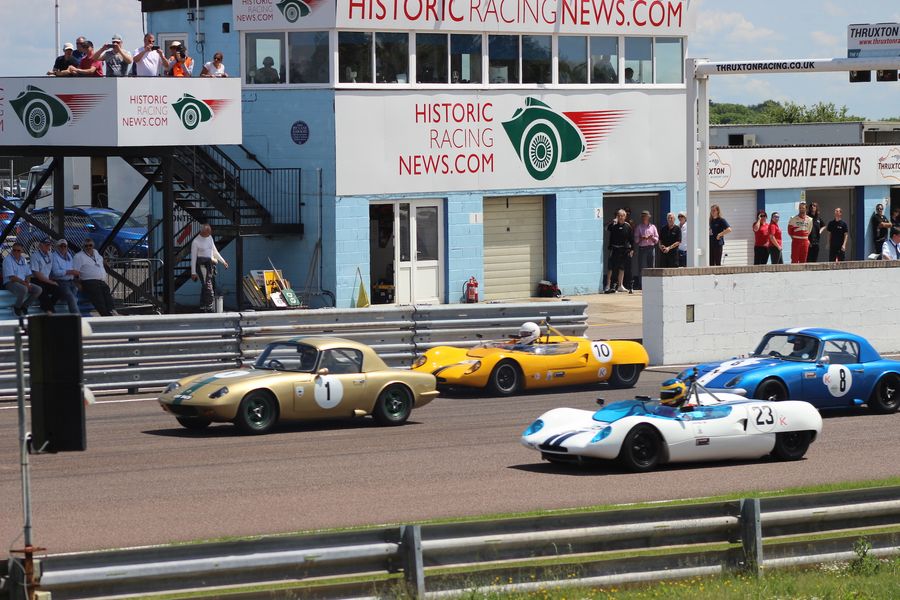 We ran this peice as part of our countdown to Thruxton's 50th anniversary meeting and with their Motorsport Celebration coming up this weekend it was suggested that we should air it again! One of our team looks back on his time at that Hampshire circuit:

This is an entirely personal view of Thruxton and how that circuit has impacted on my career in motorsport journalism, being the first circuit I worked at it is still important to me – and the view from the platform by the press box at the chicane before the debris fences went up there was one of the best in British motorsport and I was fortunate to have enjoyed it for many years.

My first visit to Thruxton was in the very early days of the circuit, I am pretty sure it must have been 1968 as my sister was born in 1969 and she certainly wasn’t about then. I don’t really remember an awful lot about it other than picking a Gold Leaf Lotus 43 as ‘my’ car in a sportscar race, the fire marshalls in their impressive metallic suits – and the fact that it was dang cold. In fact, thinking back now it may have been my complaining about the lack of feeling in my feet which saw us head home early in the day – though we did get near the start line for the start of the race of the day.

My next visit to my ‘local’ circuit happened almost 20-years later to my chagrin. A first-ever trip to Le Mans in 1986 saw me buy Autosport magazine on the Thursday after that race to find out what on earth had happened in the race (the only English circuit commentary in those days was Bob Constandouros at fine minutes to each hour).

That got me following motorsport (other than Formula One on the TV) for the first time seriously, and I remember watching some great racing from the Thruxton grandstands by the chicane – the British Touring Car Championship just as the turbo-charged Sierras were coming to the fore, the visits of the British Formula Three championship, and some great one-make racing such as the Renault Five Turbo series in particular Barrie Williams attaching the chicane lap after lap.

One day an advert in the back of Autosport caught my attention. It was for a new motorsport magazine after freelance journalists to cover events for them, so nothing ventured etc. I duly wrote off.

To my amazement I got selected and my first meeting was to be the next visit of the BTCC to Thruxton. Having no idea at that point how things worked I phoned the circuit to find out how you got to apply to work as press there (this was before the days when we became ‘media’ rather than press), and had the great fortune to be put through to Enid Smith, then press officer for the BARC.

With infinite patience she explained that she could sort that for me, I admitted that it would be my first meeting, and to my amazement she suggested coming along to the meeting prior to that on a press pass so that I could ‘see how it all worked’. Enid may not be hugely well-known in the annals of British motorsport but she ran a tight press room, was totally unflappable and much-loved by the entire UK motorsport press cohort as she was one of those people who tried to help you do your job, rather than come up with reasons why you couldn’t do that, go there etc.

That first BTCC meeting flew by, but there came a scary moment when I realised I might have to actually speak to a driver or two. These had been beings apart until this point, but I was soon to discover that clutching a pen and a notepad and starting with ‘Hello, I am from Competition Car’ meant they would stop what they were doing and talk to you. Thinking back I cannot remember whether it was Ray Bellm or James Weaver I spoke to first, but both were polite, infinitely patient, and have my eternal thanks.

For a year or so I covered meetings for Competition Car, who would even let me illustrate my own articles so during a race I would be stood on the platform next to the press box lap charting the race, taking pictures, and keeping a log of what car was in which picture as I had to send the film straight off. One meeting I took refuge in the press box myself and found myself sat next to Marcus Pye from Autosport.

Ever the gent, Marcus asked who I was working for and then said they were often after someone to cover Thruxton for them. Contact details exchanged, for almost ten years I covered racing at Thruxton for Autosport and Motoring News (as it was at the time), including covering the 25th anniversary meeting for MN.

A feature of that meeting was the visit of the Williams Formula One team, who took over the scrutineering building with a FW15-C Renault for Damon Hill. The plan was for Damon to do a demonstration run which was to include a crack at setting the fastest outright lap of the circuit, but to everyone’s embarrassment the engine refused to cooperate (a pressure issue with the pneumatic valve system if I recall).

Having been told to do a news story on the run for MN this was a bit of a drawback for me (let alone for Damon and the team), so I thought I ought to get a quote off a somewhat downbeat Damon, which wasn’t the easiest interview ever but kept my editor happy.

To their eternal credit Williams returned at the end of the season to put in that quick lap. In many years of motorsport there are not that many times when I have watched something and thought ‘that is quick’, but the memory of the speed of the Williams as Damon took it into Church and up Woodham Hill to the chicane will forever linger, an epic lap.

Now, that is what I remember, doing some quick checking more than one in-line source suggests the lap was done at the 25th anniversary meeting…

The circuit hosted some great, and not so great, series over the years I was there, the British sportscar series run to Group C2 regs was entertaining, as were the visits of the short-lived British F3000 series. One memory is of the visits of the various Formula Ford series, where drivers would sometimes sacrifice first gear, only used off the line, to have four better ratios for racing round the rapid circuit – on occasion a driver doing this would voluntarily start at the back of the grid knowing they would have a sluggish getaway.

Other points that stand out over the years include the Simtek F1 team doing some sneaky running at lunchtime in a clubbie meeting, a one make race for Saab Turbos won by the guesting Tiff Needell that saw an out of control car spear down the pitlane, and a BTCC race where Chris Hodgetts in a two-litre Sierra (just prior to the series adopting the two-litre formula) was mighty on the brakes into the chicane lap after lap. A low point was a very early Formula Renault round with four or less cars circulating for much of the race.

I only missed one meeting in the next few years, up until the point when I was offered a role with a motorsport PR company and somehow went from club-racing freelance journalist to press officer for the British Formula Three Championship in a matter of days.

My first meeting was at Thruxton in March 1998 when Enrique Bernoldi won, and my final in that role was the 1999 season-closer, also at Thruxton, when Marc Hynes sealed the title in Manor Motorsport’s first season of F3, Luciano Burti won the race to tie the win tally of Hynes and take second, and Jenson Button completed his only season of the formula before leapfrogging the two drivers ahead and going into Formula One with Williams.

At the same time I did PR duties for two series on the TOCA-package, one of which was Formula Vauxhall Junior. In 1999 the main commentary box was a hut high in the air on the outside of the circuit at the chicane exit, which you got up to via a precarious ladder (race results and other information were hauled up and own by a supermarket basket on a rope…).

The BTCC commentary team at the point were Robin Bradford and David Addison, with the avuncular Robin esconsed in the box for the racing. Wanting to give him something to say out of the usual I visited one of the teams and got some speeds and gears for the cars for parts of the circuit.

Handing a map of the circuit with the information written on to Robin as he worked his way through the grid pre-race, he seamlessly moved on to starting to talk about the speeds of the cars through Allard, the complex, on the run into Church…and promptly switched his mic off.

“Are these real?” he asked me in a quizzical voice. I assured him they were and he pointed at the top speed of the cars just before our 16 and 17-year-old drivers hit the brakes for the chicane. At this point it clicked with me that our 1600cc wingless single-seaters were touching 147mph at that point, easily the quickest cars in the place in a straight line with no aerodynamics to slow them down. Every time I have seen Formula Fords, wingless Monopostos or similar at Thruxton since, I have a better appreciation for how quick they are really going.

Since then my visits have been somewhat more sporadic having often been at clashing meetings elsewhere, but the Hampshire circuit has been a key part of my journalistic career. For a number of years I wrote a historic piece for each raceday programme, without Enid’s kindness I do wonder if I would have given up there and then instead of having spent 30-years writing and talking about motorsport in a variety of roles, and now the race control building and podium bear HistoricRacingNews.com branding.