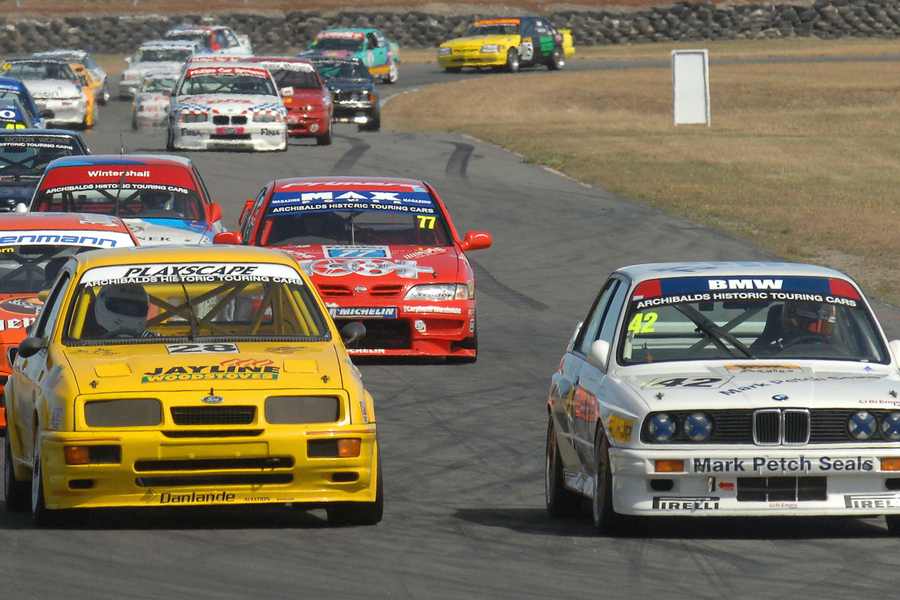 Thouhg he was doing double duty at the meeting – also demoing the hi-tech F1-style Rodin FZED single-seater – the man they call Murph proved a real star turn behind the wheel of local man Peter Sturgeon’s ex Cecotto/Brancatelli BMW E30 M3 Gp A car, qualifying it on pole and winning two of the four Archibalds Historic Touring Car Series races over the weekend.

“That car is just mega,’ he said of the quick, nimble little Gp A two-door, in which in won the first race untroubled but then spent the other three battling away mightily, first with Christchurch car dealer Bruce Miles, then Motueka category veteran Brett Stevens,

Miles got the jump on fellow front row starter Murphy off the rolling start to win the second race in his later model ex Prince Leopold van Bayern BMW E36 320i SuperTourer. Stevens, driving his Ford Sierra RS500 Cosworth Group A car, then used the susperior power of its turbocharged engine to win the third – after swapping places with Murphy several times.

It was Murphy who won the final race though after Stevens – who had been again been swapping the lead with Murphy virtually every lap – came under attack himself and had to momentarily defend second spot from Race 2 winner Bruce Miles.

That was all the impetus that Murphy needed and with his third fastest race lap out of the four HTC class races, he eased away to take his second victory of the weekend form Stevens, Miles and usual category fast man Arron Black (BMW E30 M3 Gp A) from Dunedin.

Christchurch’s Phil Mauger (Nissan Primera SuperTourer) had been part of this group battling for places in the top four in previous races (finished a round-best second to Murphy in the first race) but flat spotted a tyre in the final and pulled in with two laps to go when the tyre went flat.

Two more local drivers, Gary Johnstone (Gp A Jaguar XJS V12) and Austin McKinley (Holden Commodore VK V8 GP A) were also rarely more than a couple of car lengths apart a little further back in the field, with Dennis Ham from Dunedin driving a NZTC-spec Alfa Romeo 155 joined them to make it a three-way battle in the final.