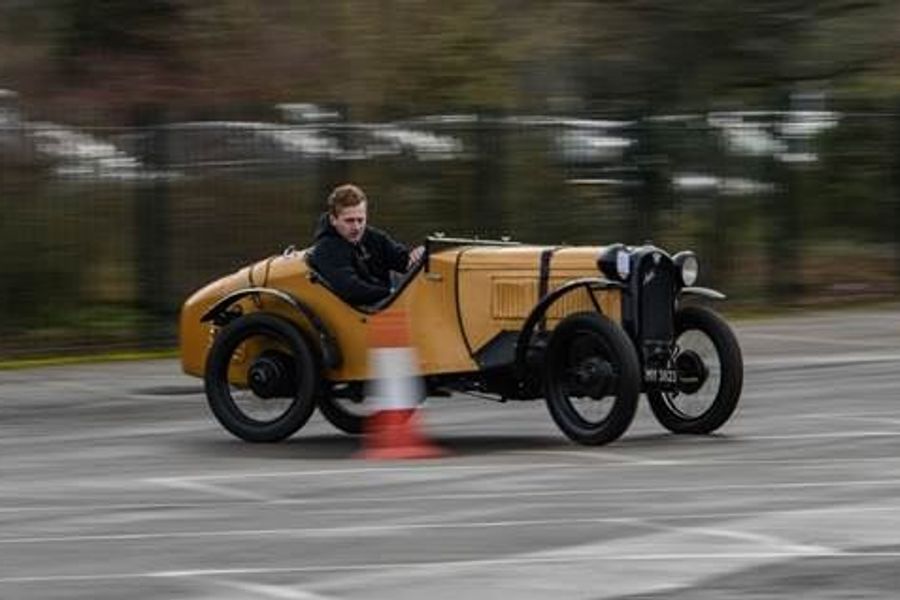 In a repeat of his triumph last year, young George Diffey led the way at Brooklands once more, claiming overall honours in the Vintage Sports-Car Club’s annual New Year Driving Tests on Sunday 29th of January. Piloting his distinct, gold-coloured Austin 7, the 23-year-old set the fastest time on ten of the day’s fourteen tests to edge out fellow young Club Member Eddie Williams in his Austin, as they enjoyed a close battle atop the Modified Sports-Cars class.
It was another notable strong start to the season for Diffey, recently named winner of the Club’s prestigious John Rowley Trophy for the best performance by an under 23-year-old across all VSCC events during the 2016 season – an accolade won by his father Simon 30-years ago.
Amongst the Standard Sports-Cars, a familiar pairing locked horns, with Mark Ballard getting the better of Alex Pilkington’s wonderful Alfa Romeo 6C in his Frazer Nash whilst Neil Thorp’s experience told as he topped the Touring Cars class in his Singer 9 Sports Coupe, ahead of the Morris Cowley of Paul Hoskins – the latter sharing with 19-year-old son Harry, who also claimed a Class award on the day.
Despite some rain throughout the day, another strong turnout of spectators arrived to enjoy the annual event at the historic birthplace of British motorsport and aviation, with many club members and non-members alike arriving in their own pre-war cars, which formed an attractive ‘period’ display in front of Brooklands’ famous Edwardian clubhouse.
This year saw a slight change to the traditional format to accommodate the renovation work taking place at Brooklands to resurrect the original finishing straight of the 1907 circuit, with a pair of tests located at neighbouring Mercedes Benz World to go alongside the familiar challenges on Test Hill and the banking. Additionally in line with new MSA Autotest regulations, each test was attempted twice, allowing competitors a chance to right any mistakes from the morning’s rounds.
The Club will return to Brooklands Museum on 17th/18th June as co-promoters of the 2017 Double Twelve Motorsport Festival, which will feature a weekend of VSCC Speed Trials, Driving Tests and Concours, as well as the grand re-opening of the restored Finishing Straight of the world’s first purpose-built motor racing circuit on Saturday, 110-years to the day since the track was originally opened.
VSCC Brooklands Driving Tests