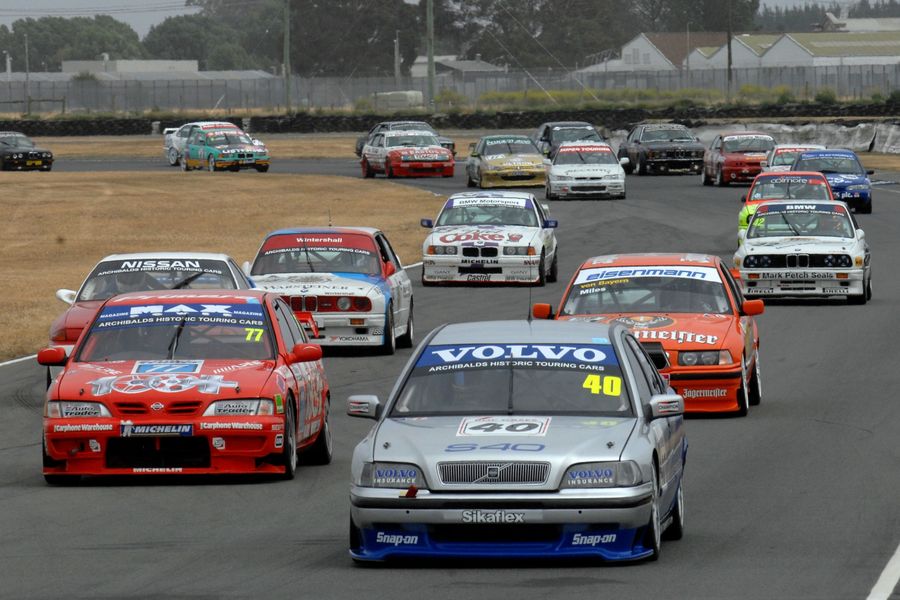 Yet Richards, the now 47-year-old second-generation driver, who has been racing professionally for over 25 years and who spent the early part of his career racing SuperTourers in period, didn’t mind admitting that he had his work cut out trying to keep ahead of several of the other car/driver combinations which were part of the 26-strong grid.

“The mix of cars in the class over here is one of the reasons - some  of those older Group A cars are still really fast in a straight line - but I think another (reason),’ said Richards, “is that the standard of driving has got better as the guys here do more driving and get more familiar with their cars.”

Any thoughts the man Aussie fans refer to simply as ‘Richo’ might have had, in fact, of taking it easy would have been well and truly dashed early on the opening lap of the first Archibald’s series race on Saturday as he came under immediate attack from first Stu Rogers then eventual winner Michael Lyons, who for the first race was subbing for car owner Phil Mauger. 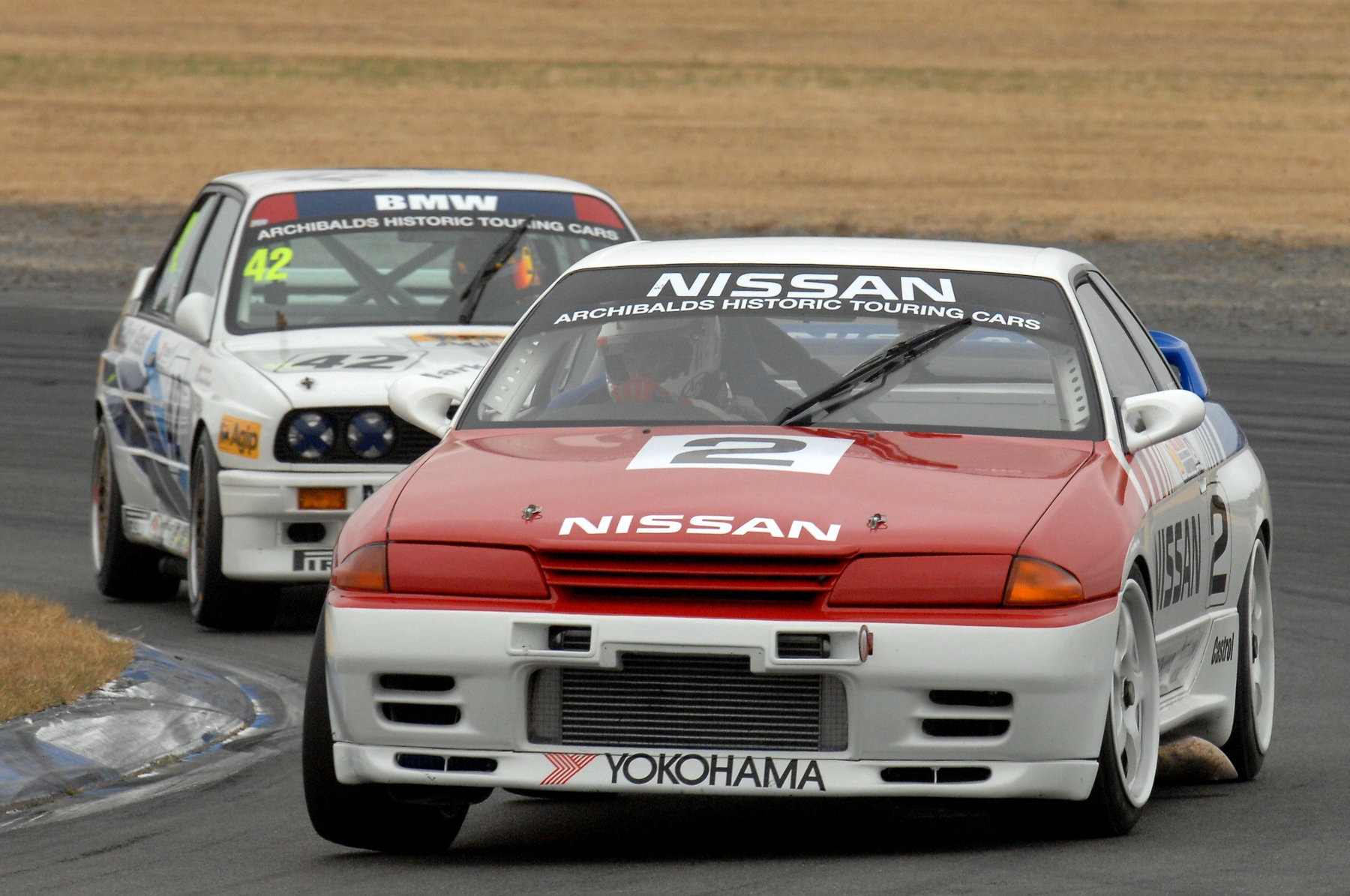 Rogers was in swash-buckling form, storming into an early lead on the first lap. Richards managed to wrestle it back off him to lead the second lap but Rogers had it back on the third and fourth laps until a small mistake saw him run wide and onto the grass momentarily. Seizing the opportunity, Michael Lyons, who had also briefly got past Richards earlier in the race, passed both and held the lead to the flag, with Richards second and Rogers third.

Invercargill man Scott O’Donnell, meanwhile, was the big mover,  making up 17 places as he worked his way from the back of the grid (after issues in qualifying) to 7th place at the flag in his late-model (2000) Prodrive-built Ford Mondeo ST.

Like O’Donnell, Arkell also started the race from the back of the grid and in his case made up 15 places.

Timaru racer Kevin Pateman (driving the Ford Telstar he and his brother built and raced in period and never sold) was the best of those running NZTC-spec cars in 13th with Steven Richards’ Dad Jim Richards, back behind the wheel of the Peter Sturgeon-owned Gp C-spec BMW 635 CSi he ran in period, 14th.

The entertainment continued in the second race later in the day with Steven Richards, Greg Murphy and Stu Rogers this time disputing the lead until the last lap when Rogers threaded the needle in a daring move to take the lead down the circuit’s long start/finish straight and make it two different winners from two starts.

After the relative cool of the first day of competition on Saturday, one of the Canterbury region’s infamous hot, dry nor-westers blew in overnight, turning Mike Pero Motorsport Park into a 30 degree C+ cauldron on Sunday.

The action on track turned out to be just as hot with a large crowd again flocking to the fences whenever the Archibald’s Historic Touring Cars were called up.

With Stu Rogers’s Gp A Skyline side-lined for the day with a blown head gasket, and Phil Mauger back in his Primera an early DNF it was Scott O’Donnell this time who took the battle to pole man Steven Richards in the first Archibald’s series race of the day.

The car O’Donnell drove at the meeting, the ex-Rickard Rydell BTCC Ford Mondeo built and run in period by the Prodrive team is one of the last – and definitely most sophisticated – Super Tourers built, and O’Donnell capitalised on a canny start and clean run up to and through Turn 1 to catapult from fourth to first place on the first lap.

Richards was never more than a second or two behind, however O’Donnell held the lead until half way thru the third lap when Richards found a way past then held onto the lead - albeit by a margin over a fast-closing O’Donnell of just 0.254 of a second at the flag - for his first race win of the weekend.

After another typically hard-charging race Greg Murphy crossed the finish line in 3rd place, just a second further back, with Bruce Miles enjoying another typically strong run to 4th place ahead of Graeme Cameron then a gap back to Arron Black in his similar era and spec BMW E30 M3, and the later-model Super Tourers of Nigel Arkell and Murray Sinclair, then the crowd-pleasing ex-Kevin Waldock Ford Sierra RS500 Cosworth of Motueka man Brett Stevens.

Give Stevens a long enough straight, and a car finally freed of the misfire which had frustrated him in both races on Saturday, and the result was there for all to see in the final Archibald’s series race - over 8 laps – on Sunday afternoon.

The field ran four-wide off the rolling start with the distinctive yellow Sierra a blur as Stevens steamed up the inside from P6 on the grid to P1 as the field accelerated away from the first turn and headed off to Turn 2.

Richards was able to close the gap under braking for the Euromarque Hairpin and through the infield complex, and was back in the lead by the second lap. But Stevens was not finished, and spent another heady lap in the lead before finally succumbing to the superior braking and handling of the Richard’s Volvo S40 but hanging on all the same to finish a weekend best 2nd, a final blast up the start/finish straight reducing the margin to Richards to just over half a second.

Greg Murphy also elected to initially slow down and eventually pit when his Peter Sturgeon-owned Gp A BMW E30 M3 started to run a little too hot for comfort, handing 4th place on a plate to series’ regular Arron Black and a fast-closing Murray Sinclair in his ex-Eric van der Poel Nissan Primera Super Tourer.

“That, in a word,” said Greg Murphy, as he was surrounded by fans and well-wishers in the Archibald’s Historic Touring Car Series marquee on Saturday afternoon, “was entertaining.”

And no one in the large crowd that gathered at the track on either day could disagree!

The 2020 Archibald’s Historic Touring Car Series now concludes with a final round at the George Begg Classic Speedfest at Invercargill’s Teretonga Park over the  Feb 15-16 weekend. 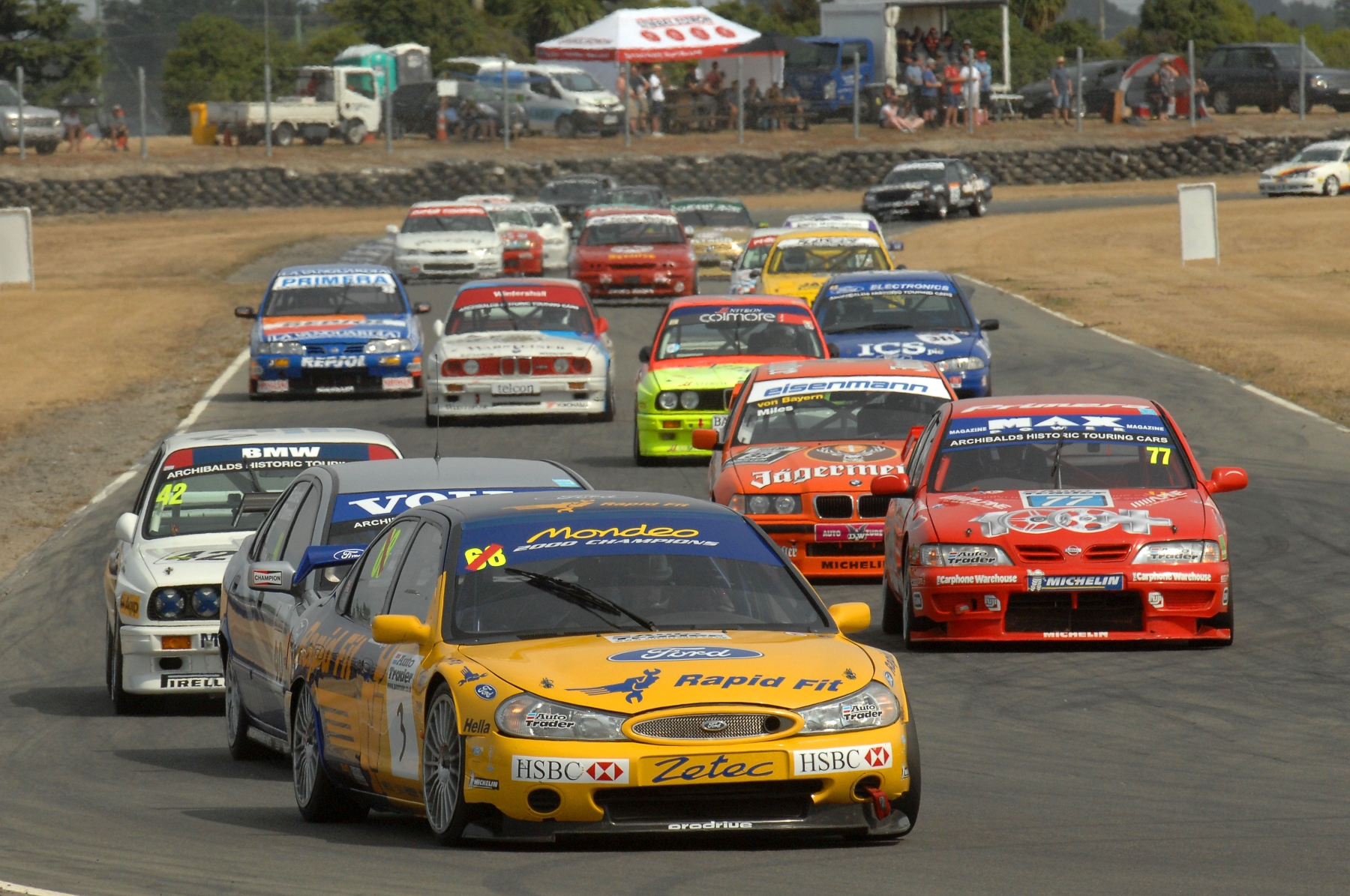