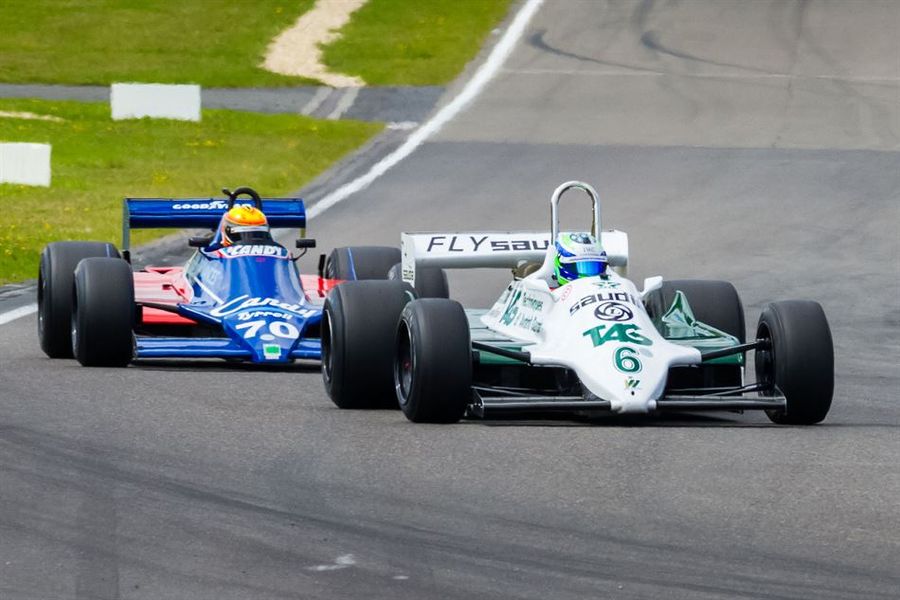 Nick Padmore was the man to beat again in the FIA Masters Historic Formula One Championship at the Nürburgring last weekend. Padmore, having qualified his Williams FW07 on pole, drove away to a controlled victory in the first race, building a gap of around 2.5 seconds to Loïc Deman’s Tyrrell 010 before the Belgian settled for second to hand Padmore the win by 4.7 seconds. “It was mega,” said an elated Padmore. “The first laps on cold tyres were the most important, obviously. After that, I looked at maintaining the gap. Loïc was pushing all the way, though, so I couldn’t have an easy time. I enjoyed it a lot!” “There was nothing I could do”, said a vanquished Deman. “In the end, I just gave up.” Steve Hartley (Arrows A4) took third, 6.1 seconds from Padmore, while Simon Fish closed the gap to Hartley to within three tenths when the pair crossed the line. The first four positions didn’t change during the race, but when Michael Lyons (Hesketh 308E) began to lose ground, Greg Thornton (Lotus 91/5) moved up to fifth. He was followed home by Joaquin Folch (Brabham BT49C), Mike Cantillon (Tyrrell 010) and Dave Abbott (Arrows A4). Max Smith-Hilliard (Shadow DN5) took a fighting pre-77 win in ninth overall, when he ended a race-long fight with team-mate Jamie Constable (Shadow DN8) in his favour. On lap four, Constable momentarily slipped in front when Smith-Hilliard missed a gear, but one lap later the older Shadow was back in front. “I almost lost third gear”, said the class winner, “so I had to be careful. I really enjoyed the fight with Jamie, though!” The tussle between the two Shadow drivers had initially been over second place in class but from lap five, Michael Lyons’ Hesketh began developing gearbox problems, dropping him steadily down the order. He was passed by both Smith-Hilliard and Constable on lap 13. Lyons eventually salvaged third place in class, crawling around in fifth gear to finish a distant 12th. “First I lost third gear, then fourth, then second…” Padmore won race two, but he was made to work hard for it. On fresh tyres, Deman pushed the Williams driver from start to finish and almost found an opportunity in the final corner. Padmore managed to stay in front with the tiniest of margins, beating the Belgian by just a tenth of a second. Simon Fish (Ensign N180) was a distant third, 22 seconds from Padmore.Michael Lyons won the pre-77 class despite brake problems, profiting from Max Smith-Hilliard (Shadow DN5) ending up in the gravel trap, and passing Jamie Constable (Shadow DN8) with five laps to go. “Loïc was gaining massively on the run down to the last chicane”, said Padmore as he explained why Deman was able to keep him honest for the entire race. “The last lap was interesting with the backmarkers; I only just stayed ahead.” “I pulled the joker!” said Deman, “I put new tyres on as I knew it was the only chance I had to beat Nick. I didn’t find any real passing opportunity, however, until that final lap with the backmarkers. He went left, I went right. His was the wrong side but he changed his mind and I had to lift. I finished the race almost up his exhaust pipes!” The gap between Padmore and Deman was never more than 1.1 seconds, and at times went down to as small as two-tenths. Behind the leading pair, Steve Hartley (Arrows A4) ran a strong third until lap seven his rear wing flew off on the back straight. “That was scary, I know!” said Hartley. “Just when you need it the most!” This handed Simon Fish the final place on the podium. He was followed by Joaquin Folch (Brabham BT49C), Greg Thornton (Lotus 91/5) and Mike Cantillon (Tyrrell 010). The safety car came out on lap 3 when Max Smith-Hilliard went into the gravel at the chicane. He was leading the pre-77 class at the time, since Michael Lyons had dropped back from fifth to 11th on lap 2 when his Hesketh 308E encountered massive brake problems. He then found a way around the problem and managed to overtake Jamie Constable on lap 10 to still take the class win. Lyons then managed to pull out a gap as Constable consequently lost a gear. This handed the remaining pre-77 podium places to Jason Wright (Shadow DN8) and Kieth Frieser (Shadow DN1). “I lost my rear brakes on lap two and nearly ran into the back of the car in front”, said Lyons. “Cooling the brakes during the safety-car period didn’t help, so I had to drive around the problem. As Jamie was braking much later I had to work out a safe place to overtake him, but I finally managed it. Third and first with these kinds of problems isn’t too bad!” Apart from Smith-Hilliard and Hartley, Jacques Rivet was the only other casualty, the March 811 driver pulling off on lap 13. The FIA Masters Historic Formula One Championship heads to Zandvoort on September 2-4.