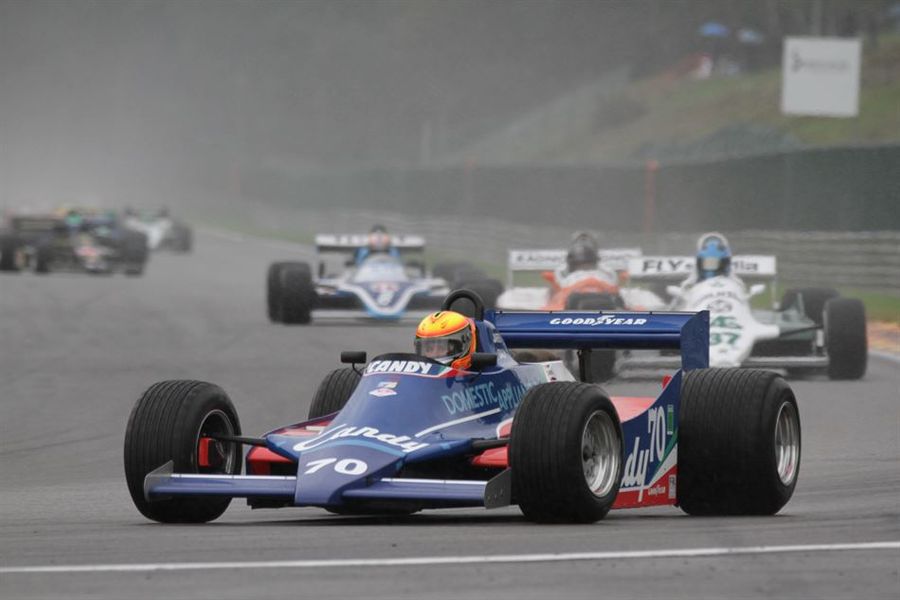 Loic Deman and Phil Keen were the stars of the annual visit of the Masters Historic Racing championships to the Spa Six Hours, both taking a brace of wins.

Early in the FIA Masters Historic Sports Car race, Jon Minshaw’s Lola T70 Mk3B still had Chris Beighton’s similar example at relatively close call while David Hart had blasted from seventh on the grid to third in his T70 Mk3B. Mayhem ensued in the pit lane when the pit window opened just as the safety car came out to allow the retrieval of Claus Andersen’s stricken Lola T212.

After the pit stops, Daniel Gibson (in another T70 Mk3B) and David Hart quickly dealt with Jon Fennimore, who had taken over from Beighton. The Beighton/Finnemore car then ground to a halt at Les Fagnes. In the closing stages, Hart overtook Gibson to take second, behind the dominant Keen/Minshaw combination.

Laurie Bennett (McLaren M1B) had an easy time of it in the Pre-66 division after Chris Jolly had to retire his Cooper Monaco on lap 21, while Dion Kremer’s Elva held off the Chevron B8s of Graham Wilson/Andy Wolfe, Alec Hammond/Nigel Greensall and class leader Andy Newall. Mark Bates (Porsche 911 RSR) triumphed over Nicky Pastorelli (Ferrari 365 GTB/4 Daytona) in the GT class.

Phil Keen also starred on Saturday morning, when the Pre-66 Touring Cars took to the track. Leo Voyazides led Keen’s team-mate Mike Gardiner in the early running, but Keen turned the tables on the other Falcon by passing Simon Hadfield early on in his stint. On several occasions, Hadfield closed up to Keen, and pulled alongside twice, but each time Keen’s superior traction out of the Bus Stop kept him in the lead, allowing him to take victory by just over two seconds.

The Craig Davies/John Young Mustang looked in contention until the stops, but ruled itself out when it pitted just before the pit window opened. A 15-second stop-and-go penalty threw the Mustang right back into a thrilling Mini tussle between Eric Hélary and Andrea Stortoni, the Frenchman coming out on top to take a remarkable third overall.

Saturday’s FIA Masters Historic Formula One race got off to a false start when a heavy burst of rain hit the track just as the slick-shod cars were lining up on the grid. Inevitably, the race was red-flagged on the opening lap, after which all cars changed to wets.

A safety car restart offered two laps to assess track conditions before the pack was finally released. Deman’s Tyrrell 010 led away Christophe d’Ansembourg, who had qualified an excellent second in his Williams FW07, while Nick Padmore starred in Max Smith-Hilliard’s pre-78 Lotus 77 to briefly take third before Steve Hartley (Arrows A4) took the place back and also demoted D’Ansembourg from second place. In treacherous conditions, the racing remained close towards the finish, the top-five covered by just 10 seconds. Andy Wolfe’s sixth place meant another class win for him and his flat-bottomed Tyrrell 012, keeping his championship chances intact.

The second FIA Masters Historic Formula One race of the weekend proved to be slightly more straightforward, with Deman keeping D’Ansembourg at bay, despite the deployment of the safety car on lap six when Wolfe suffered a tyre blowout. Behind the leading pair, Jean-Michel Martin (Tyrrell 010) fought his way past Nick Padmore and Steve Hartley to complete a unique all-Belgian podium.

Padmore claimed a Pre-78 double by following Hartley and Rob Hall’s Matra-engined Ligier JS17 home in sixth. Meanwhile, Richard Barber (Williams FW08) duelled with Wolfe in the flat-bottomed class and got past before the Tyrrell was forced to retire. Wolfe’s rare DNF means that the championship is wide open again, with the title up for grabs for both Wolfe and Deman at the final round at Dijon.

Michael Gans and Andy Wolfe took their AC Cobra to the car’s first win after they comfortably beat the similar machine of Karsten Le Blanc/Nigel Greensall in the weekend-closing Gentlemen Drivers race. James Cottingham/Tim Summers (Daytona Cobra Coupé) led the first part of the 90-minute race, but faded after the order was shuffled up by the deployment of the safety car just seconds before the pit window opened.

The caution period was called when Marc Valvekens’ Lotus Elite rolled out on the track. The car’s fibreglass body suffered severe damage but fortunately the Belgian was OK. Challenges from the pole-sitting Michael Funke Bizzarrini and the Voyazides/Hadfield Cobra Daytona Coupé evaporated early on, allowing German Count Marcus von Oeynhausen to take third in his Jaguar E-type.

Remarkably on a track such as Spa where power matters most, the Ginetta G4R piloted by Ron Maydon/James Hagan finished fourth overall to win the lightweight class. Meanwhile, Keith Ahlers and Billy Bellinger took another class win in their Morgan SLR to become the 2015 champions. Malcolm Paul and Rick Bourne won their class after the similar TVR Grantura of Mark and Simon Ashworth posted a retirement.

Confusion reigned in the Masters 70s Celebration race, held in conjunction with the HTCC and DRM Pokal. Chris Ward led most of the race in his HTCC-entered Broadspeed Capri, while Manfredo Rossi used the excess power of his Martini Porsche 935 to charge through the field and take the 70s Celebration lead (and second place overall) by lap two. The Italian then missed his pit window, which meant that Mark Bates would have been the winner in his Porsche 911 RSR, but Bates along with six other cars were also excluded because of the pit lane infringement.

There was more drama right at the end when Ward was seen pushing his out-of-fuel Capri through the pit lane in a frantic effort to reach the timing beam. This gave Rossi the win on the road, but it was all for nothing. Willy Toye (Triumph TR8) won the GT class while local Mazda driver Gust van Haelst took touring car honours.

The final rounds of the 2015 Masters Historic Racing season are at at Dijon-Prenois on October 2-4.