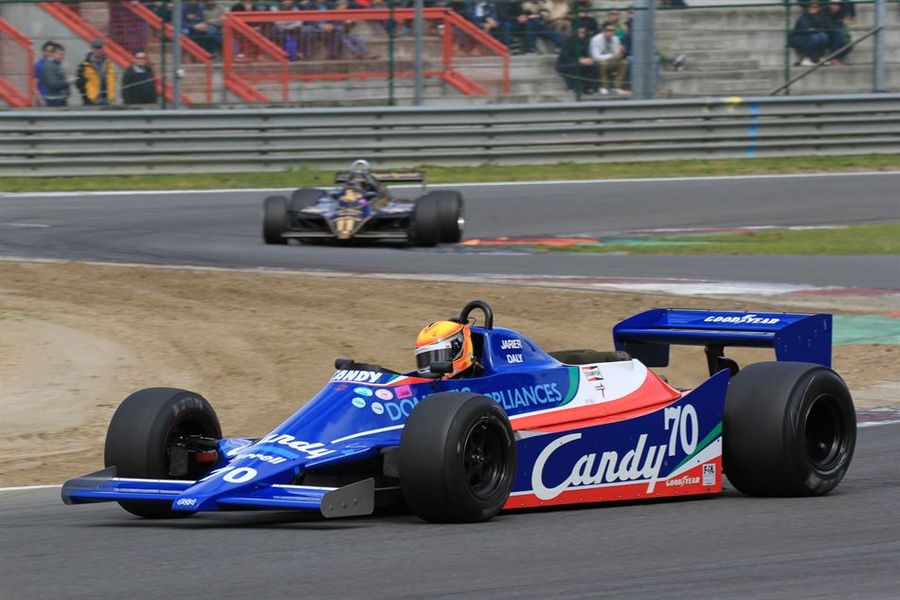 Loïc Deman (Tyrrell 010) and Christophe d’Ansembourg (Williams FW07) gave the home crowd with a Belgian 1-2 in the second FIA Masters Historic Formula One race at Zolder. It was Deman’s second lights-to-flag win of the weekend, while d’Ansembourg held off Pre-78 front-runners Michael Lyons (Hesketh 308E) and Nick Padmore (Lotus 77) to take second.
Like on Saturday, Deman was cleanly away at the start but behind him Lyons, d’Ansembourg and Greg Thornton (Lotus 91) all wanted to be in second place into the first corner, Lyons even taking to the grass in his efforts to avoid contact. Thornton won out, while Lyons had to tuck in and be satisfied with fourth place. In the 16-car field, they were followed by Padmore, Alain Plasch (Fittipaldi F5A), Joaquin Folch (McLaren M19C) and Ian Simmonds (Tyrrell 012).
Three corners further, Marc Devis’ race was over when he parked his troublesome Maki in one of the escape roads, while the opening lap ended with Mike Wrigley (Williams FW07) and Katsu Kubota (Lotus 72) back into the pits. Wrigley was out, but after the dust from his throttle slides was cleared Kubota returned to the track on lap nine.
Deman built a lead of 3.5 seconds, setting fastest lap on lap six, but Thornton had a joker up his sleeve: he had bolted on a set of fresh tyres, and on lap eight, he set fastest lap himself to bring down the gap to two seconds. One lap later, however, Thornton pushed too hard, went wide into turn one and ran through the gravel trap. He returned in sixth place but retired after another moment.
Behind Deman – who won with a 12-second lead – the three-car battle for second place raged until the chequered flag. It was only near the end that Christophe d’Ansembourg managed to break free. Lyons and Padmore in their private battle for pre-78 spoils ran nose-to-tail all race, and eventually finished two seconds behind d’Ansembourg.
In fifth, Alain Plasch drove a lonely race, but Joaquin Folch (giving his McLaren M19C a pre-Monaco shakedown) and Ian Simmonds (Tyrrell 012) ran in close company to take sixth and seventh. Behind them, Jason Wright (Shadow DN8), John Delane (Tyrrell 001) and Frank Lyons (McLaren M26) fought over eighth place, swapping positions several times before Wright came out on top.
Daniel Rollinger retired his Iso-Marlboro FX3B with a broken shock absorber, while David Abbott parked his Arrows A4; the reason is unrepeatable!
“That was not so easy,” said a delighted Deman afterwards. “I knew Greg had a new set of tyres and he was pushing really hard so I had to work harder than yesterday, but then he made a mistake and went off which gave me the break I needed. It is a great feeling to win here at my home track.”
The next stop for the FIA Masters Historic Formula One Championship is at Brands Hatch, UK, on May 28/29.
Michael Lyons Williams FW07 Loïc Deman Tyrrell 010 Christophe d’Ansembourg Lotus 77 Hesketh 308E FIA Masters Historic Formula One Nick Padmore