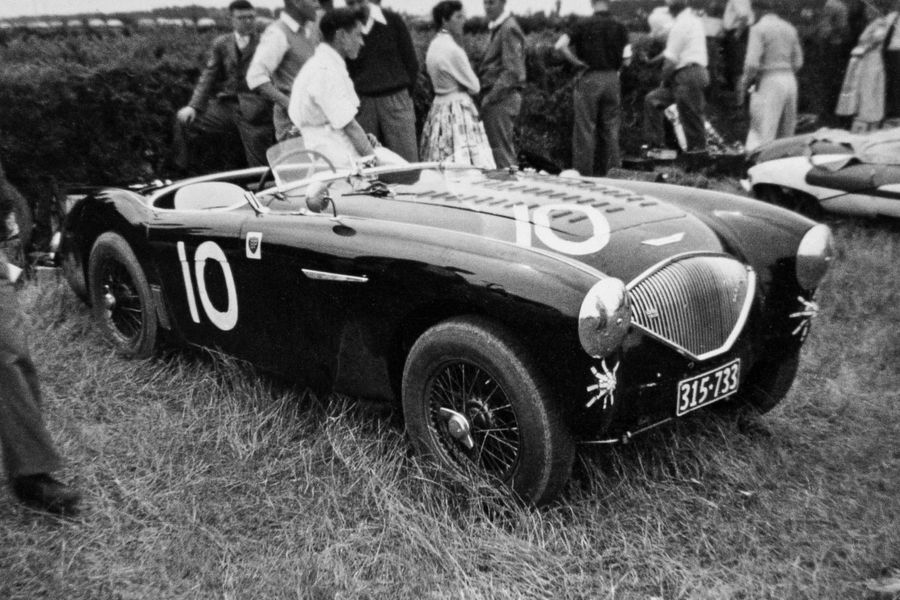 One of New Zealand’s most iconic classic era race cars, the Corvette V8-engined Austin-Healey originally built and raced by Christchurch man Arthur Kennard, is set to shake-up the annual Goodwood Revival meeting in September this year.

The car, only recently rebuilt after languishing for almost three decades in a damaged state after a road accident in 1967, is now owned by Christchurch businessman and keen classic and historic driver and enthusiast, Lindsay O’Donnell.

Earlier this year O’Donnell received an invitation – much coveted in the classic racing world - from the man behind the annual Goodwood Revival meeting, Lord March, to ‘bring the car over’ for this year’s Revival meeting. And O’Donnell in turn has enlisted one of the best young UK-based classic and historic racing drivers, Michael Lyons, to drive the car.

Lyons is a regular visitor to New Zealand, having raced F5000 and historic Formula 1 single-seaters with success here as well as at home in the UK.

The ‘Healey-Corvette’ he will drive was originally bought in the UK and used – in original six-cylinder-engined form - as a road car there by Kiwi Speedway great Geoff Mardon, before being shipped home to New Zealand and sold in 1955 to Christchurch garage proprietor Arthur Kennard.

Kennard raced it for the next two seasons in factory standard form before taking the unusual step at the time of buying – from local General Motors dealer Blackwells – a brand new 283 cu. in. V8 engine built for the then all-new Chevrolet Corvette, as well as a set of genuine Dunlop disc brakes originally fitted to a – at the time, highly exotic - Aston Martin DB2.

With  - way -  more power and torque, and brakes to match, the re-powered car was a revelation, Kennard winning the Ken Wharton Memorial Trophy sports car support race at the 1958 New Zealand Grand Prix meeting at Ardmore on debut and going on to enjoy considerable success before selling it on in 1959.

Just before its sale Kennard ran a standing quarter mile in the car at Ashburton in a time of 14.5 seconds and achieved a top speed over a flying kilometre of close to 241km/h (150 mph).

As was the case back in the late 1950s and early 1960s the ‘Healey-Corvette’ was then used as both a road and race car for the next seven years until its then owner crashed it on his way back to Timaru from the Lady Wigram Trophy meeting in January 1967.

Though, obviously repairable, the insurance company chose to write the car off and the wreck was acquired by a Christchurch man who kept it until the mid-1980s when he finally agreed to sell the rolling chassis to local craftsman panel beater Dave Bunn.

Bunn spent the next 10 or so years carefully repairing the damage and returning the car to ‘better-than-new’ condition, before accepting Lindsay O’Donnell’s offer to buy it.

O’Donnell then wasted no time despatching the car to noted classic and historic car race engineer Eric Swinbourn who went over the beautifully rebuilt and painted classic to set it back up as a race-spec road car so that its new owner could enjoy it in the same sort of manner Arthur Kennard did originally.

Receiving an invite to ship it back ‘home’ for this year’s Goodwood Revival was a bonus, one – says O’Donnell -  he grabbed with both hands:

“For those who turn up to watch Michael driving it, it is obviously going to be something special because, though there will no doubt be plenty of V8-engined AC Cobras there, I’m fairly sure there will only be the one V8-powered Austin-Healey. We also believe that Arthur was the first Healey owner in the world to do a V8 conversion, so there will be a lot of interest in the car from that perspective as well.

“Equally for Kiwis it’s going to be something to celebrate because by doing what he did (fitting a powerful V8 engine to a lightweight chassis) Arthur set a precedent which is still being followed here - and indeed around the world – to this day.”

O’Donnell is  not doing things by halves either, taking both Dave Bunn and Eric Swinbourn with him to fettle the car while it is at Goodwood.

The Goodwood Revival is widely regarded as the pre-eminent classic and historic motor race meeting in the world. Entry is by invitation only with each event attracting hundreds of owners of historically significant cars and motorcycles who can either drive their cars or ride their motorcycles themselves or enlist the services of professional drivers or riders to do so.