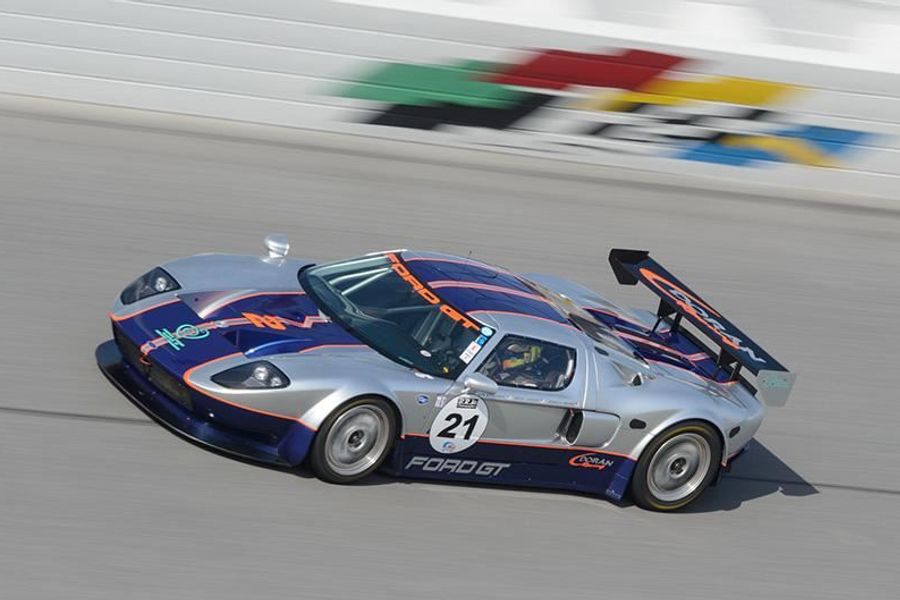 In preparation for this weekend's Historic Sportscar Racing (HSR) Classic at Daytona presented by IMSA, Memo Gidley turned his first laps at Daytona International Speedway (DIS) in nearly four years this week and is ready to race on the 3.56-mile DIS road course again after fully recovering from severe injuries sustained in an accident in the opening hours of the 2014 Rolex 24 At Daytona.
Gidley has returned to DIS to compete for the first time in the 24-hour long Classic at Daytona race in a Doran Racing Ford GT with co-drivers Brad Jaeger and Lyn St. James. Doran built the 600-horsepower Ford GT in 2008, and the race car remains a fan favorite nearly a decade after competing in the IMSA American Le Mans Series (ALMS).
Gidley himself has always been popular in the paddock too. Universally liked by race fans and competitors alike, his long and tireless recovery and determination to get back behind the wheel just further endeared him to the worldwide motorsports community.
"There is no hesitation from me about driving at Daytona again," Gidley said. "It just makes me feel excited to think about it. For me, it is a milestone event after what happened to me at Daytona in 2014. To now drive at Daytona again is just going to be pure joy for me and I hope an inspiration to somebody that maybe saw what I went through and now sees me back on the track."
Gidley's return to Daytona this week is his second visit to the World Center of Racing this year. He attended this past January's Rolex 24 for the first time since his accident to extend his gratitude to DIS, IMSA and the Daytona area medical personnel who helped in his treatment and recovery, in addition to announcing he had been medically cleared to race again.
"Getting back as a spectator earlier this year to show my appreciation to Jim France and all the Daytona and IMSA people was a very important goal of mine," Gidley said. "It's also special to be able to make my Daytona racing return with the Doran Racing team and many of my friends and old teammates."
Gidley raced a Daytona Prototype with Doran Racing from 2008 through 2010, frequently co-driving with Jaeger.
"Memo and I were co-drivers for three Rolex 24 Hour races at Daytona and over that time became really good friends," Jaeger said. "It means so much to be able to reunite at the HSR event this weekend in Daytona, and with Doran Racing, who we both drove for. I know that this is a really special weekend for Memo, and I'm just happy that I can be a part of it, and in a Ford GT nonetheless. The Ford GT is an amazing car! Not only does it look and sound great, but it's a forgiving car, which means it's quite easy to drive it at the limit. Driving a Ford GT alongside Memo and Lyn St. James at Daytona will make for a memory I hold onto for a long time!"
St. James will be pulling double duty in the Classic at Daytona. She will partner Kathy Blaha in the Heritage Motorsports No. 14 1974 Porsche 911 RSR - the only all-woman driving team in the race - in addition to trading off with Gidley and Jaeger in the Ford GT.
"I am looking forward to co-driving with Kathy in her classic Porsche 911 and I'm also very happy to be racing the Doran Ford GT this weekend," St. James said. "I've been able to race it at Indy and Watkins Glen, and it's become one of my favorite race cars, so Daytona here I come!"
- Along with Gidley, Jaeger and St. James, Ron Fellows and James Gue are among the other notable drivers and past Daytona winners added to the Classic 24 at Daytona entry list just this week.
An overall winning co-driver for Team Corvette in the 2001 Rolex 24 At Daytona, Fellows makes his Classic at Daytona debut in a similar HAWK Performance 2006 Corvette.
Gue, who co-drove to the PC-class victory in the 2014 Rolex 24 At Daytona, has been added to the powerhouse Rogers Motorsports team for the Classic at Daytona. He is listed to drive the team's 1985 Group 44 Jaguar XJR-7 with Doug Smith and Andy Wallace, and could also join Smith and Wallace behind the wheel of the team's 2005 Audi R8 LMP that is undefeated in the Daytona Classic and going for its third-straight win this weekend.