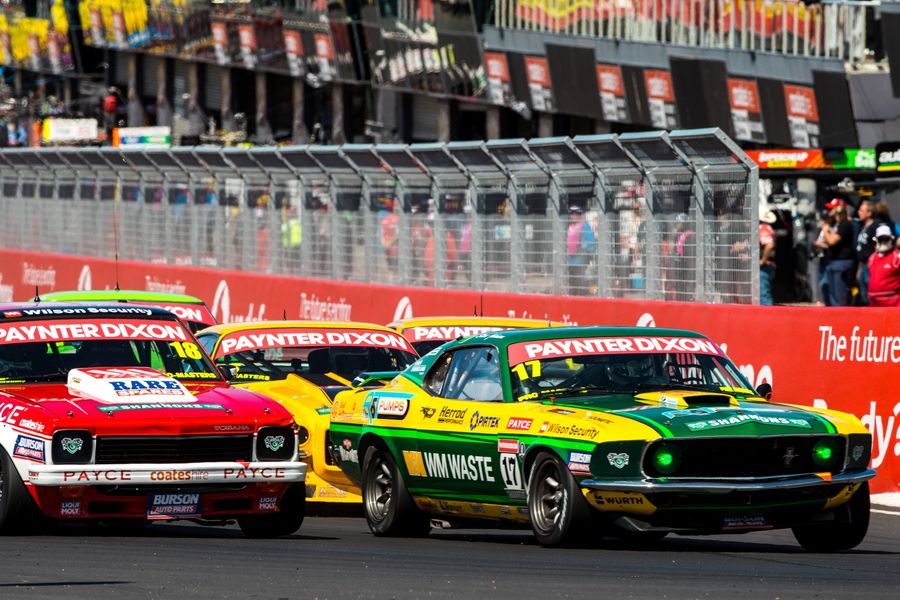 On the verge of a record-breaking season, Steven Johnson has extended his Paynter Dixon Touring Car Masters series lead via victory in race 20 of the season at Mount Panorama. Meanwhile, starring drives through the field set tomorrow morning’s six-lap finale up to be a spectacular occasion with most of the fast cars to have struck issues this weekend now back at the pointy-end.

Johnson beat home Bowe and Mark King in today’s race in what was a straightforward affair for the Team Johnson Mustang driver. He won by 1.6 seconds, set the fastest lap and won for the 14th time this season – equal to the most successful ever Touring Car Masters season by a single driver.

John Bowe won 14 races in a row on his way to the 2012 championship, Johnson with five attempts remaining to try and beat that benchmark. Bowe was solid en-route to second while Mark King again excelled as he finished third for the second straight championship race.

It was behind the top three, however, where the battles lay as several drivers battled hard for a position in the top five.

A stout fourth to Brett Youlden saw him just edge home Adam Bressington in a thrilling finish. Youlden spent much of his race battling with Jim Pollicina, ultimately usurping the Torana driver mid-race before pulling away in fourth.

Bressington, however, stormed through the field, starting outside the top 20 following his puncture in race one. He made up 10 positions on the opening lap, was 10th by lap two and sixth two laps later. He closed dramatically on Youlden throughout the final lap but was unable to sneak past the Monaro in the closing stages in a remarkable comeback drive.

Karanfilovski finished sixth to continue his strong weekend while Pollicina slipped to seventh at the finish. Eighth was Marcus Zukanovic, another driver to work his way through from deep in the field at the start of the race. Cameron Mason and Jason Gomserall completed the top-10.

The race was not without it’s drama as several drivers again felt the sting of Mount Panorama. Cameron Tilley had his Valliant Pacer flying in the early stages, despite having to thrash to get the car on the grid in the first place.

The Pacer had broken a tail shaft late in the Saturday morning Dometic Trophy Race, forcing the team into a replacement – found in the form of an item sourced from nephew Jamie Tilley. His Mustang had been forced out of the weekend after suffering broken suspension in the morning event, though the replacement item didn’t last long in the Pacer. In a spectacular moment, the tail shaft broke and flew from underneath Tilley’s Pacer down Conrod straight on the second lap, forcing him out.

Andrew Fisher was also endured a disappointing day; Another driver to charge through the field, he had climbed to ninth place by mid-race before he caught the kerb at the Chase, unloading his car and seeing him end up in the gravel trap.

Earlier in the day, Brad Tilley won the Dometic Trophy race having started the jumbled grid affair from pole position. He beat home Brett Youlden and Paul Freestone in the four-lap dash while Wayne Mercer and Rusty French completed the top five.

Andrew Fisher, Jim Richards, John Bowe, Adam Bressington and Jim Pollicina completed the top-10. The final race of the Bathurst weekend and the 21st of the 2018 championship will commence at 8:35am on Sunday morning.