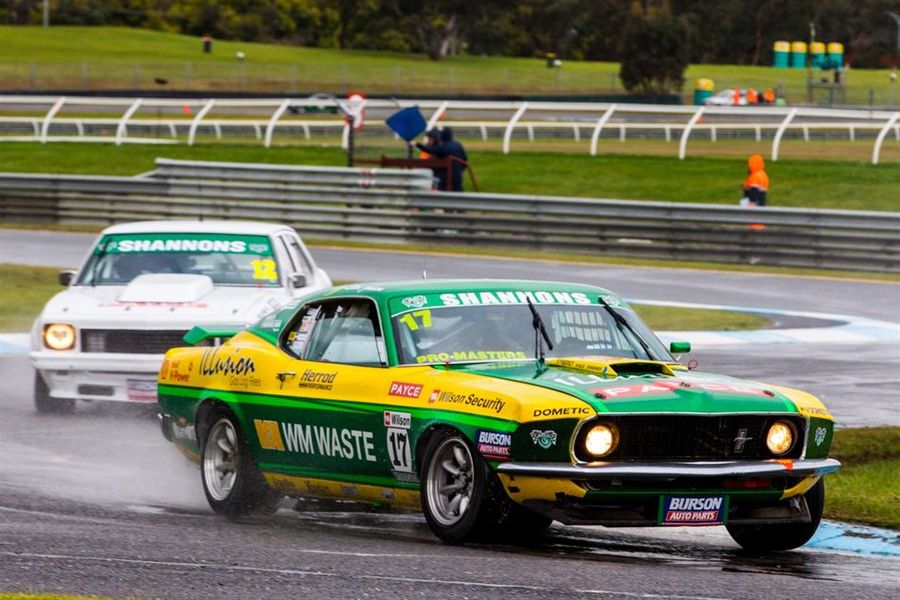 Steven Johnson stormed from the back of the field to win the Dometic TCM trophy race at Sandown, working his way to the front to win in sopping wet conditions today. Adam Garwood and Cameron Mason also starred and finished second and third, respectively, in a classic race – one that went the full distance and without major dramas despite the heavy conditions.
Starting from pole, Mason and fellow front-row starter Terry Lawlor raced wheel-to-wheel through the first four corners before the driver of the bright Red Mustang edged himself in front of the field as they thundered up the back straight. The chasing pack was slightly delayed when Geoff Fane spun just before turn four, though avoided any damage and was ultimately able to continue at the back of the field.
Adam Garwood and Adam Bressington were the big movers on the first lap, Garwood storming from 12th to fourth and Bressington from 10th to third. Bressington and Garwood both passed Lawlor’s Mustang on lap two as they battled for second, while Mason pulled away to a comfortable early lead. Johnson had stormed to sixth by the end of the second lap – rapidly chasing the leaders as the track dried.
Mason held on until the seventh lap, when Garwood slipped past to take the lead for the first time. Johnson also passed Mason on the same lap, and then grabbed Garwood the next time around as the pair ran onto the start-finish straight.
The trio crossed the line in that order, Garwood surviving a trip through the mud at turn three on the final lap to score second, with Mason scoring his third podium finish of the year.
Adam Bressington finished fourth and Tony Karanfilovski a superb fifth – having started 13th.
Eddie Abelnica stormed his way through the field to sixth, battling at the end of the 10-lap affair with his Queensland Raceway sparring partner Ryan Hansford. The pair stormed through the field in unison, swapping positions amongst themselves as they both worked their way into the top 10.
Behind them, Bowe held back on the opening lap, taking the conservative option through the first four corners as the field sorted themselves out. He then began a typically methodical climb though the field and ultimately finished eighth.
Lawlor and Graham Alexander’s HT Monaro completed the top-10 in a highly entertaining affair. With the Dometic Trophy Race complete, attention turns to the two remaining points-paying races on Saturday and Sunday this weekend.
Bowe will start race two from pole, thanks to a stunning lap in the dying stages of today’s 20-minute qualifying session that came on a drying circuit. An earlier downpour left the track sodden before qualifying however times rapidly dropped as the circuit cleared.
Bowe looked set to settle for third or even fourth however required only one flying lap to take pole after leaving the pits with less than four minutes to go in the session. Steven Johnson was the man he usurped, the Team Johnson Mustang holding on to second and just 0.19s behind.
Eddie Abelnica and Ryan Hansford will start third and fourth, respectively, with Tony Karanfilovski and Adam Garwood locking out row three. Jason Gomersall, Adam Bressington, Cameron Mason and Jim Richards completed the top-10.
Melinda Price endured a difficult day with braking issues, while Rusty French was forced to change an engine in the Skye Sands Mustang after dropping the oil pump belt in practice. Rohan Little also found himself out of action with a broken rocker in his Porsche 911.
Race two will commence at 11:30am on Saturday morning (AEST).
Race One Result:
1    Steve Johnson (Ford Mustang Fastback) 10 Laps in 15:07.3121
2    Adam Garwood (Holden Torana SLR) +2.2928s
3    Cameron Mason (Ford Mustang Fastback)
4    Adam Bressington (Chevrolet Camaro SS)
5    Tony Karanfilovski (Ford Mustang Trans A)
6    Eddie Abelnica (Ford Falcon XB Coupe)
7    Ryan Hansford (Holden Torana SLR)
8    John Bowe (Holden Torana SLR)
9    Terry Lawlor (Ford Mustang Coupe)
10   Graham Alexander (Holden HT Monaro GTS)