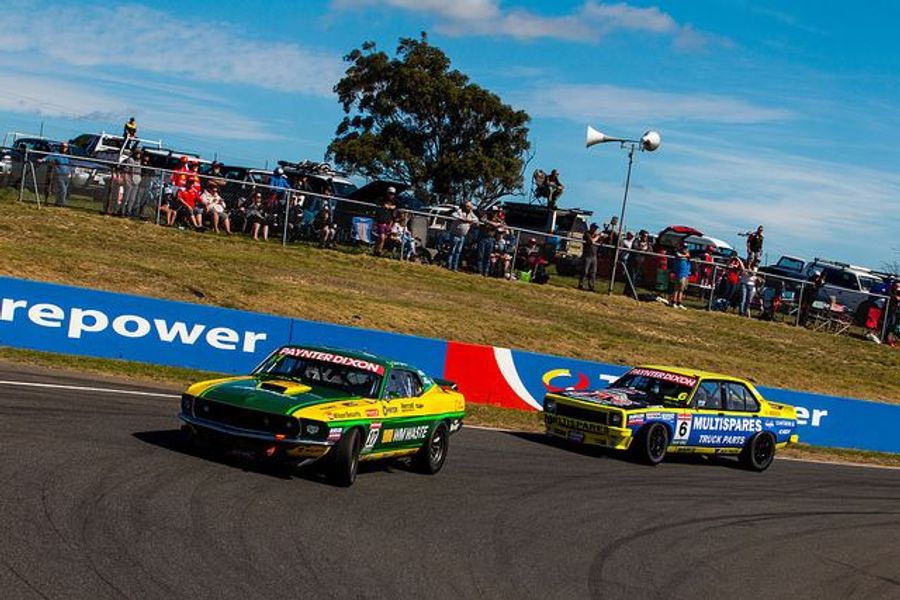 Steven Johnson has picked up exactly where he left off on the Paynter Dixon Touring Car Masters series return to Symmons Plains in Tasmania this weekend. Johnson scored four wins from four starts on his category debut at the venue in 2015 and added a fifth to that tally today after passing and pulling away from polesitter John Bowe in today’s 15-lap affair.

Meanwhile, Jason Gomersall finally became a TCM winner in the Dometic Trophy Race earlier in the day as he held out Paul Freestone by less than a car length to record his first ever win in the category. The fourth championship race of the year saw Bowe go from pole with Johnson alongside, though it didn’t take long for the Mustang to apply the pressure.

A great run out of the famous Symmons Hairpin on the third lap saw Mustang pass Torana and grab a lead he’d never lose. A lap earlier both drivers had smashed the TCM lap record at Symmons Plains, Johnson re-setting his own benchmark to 56.2339s as he chased Bowe.

Once past, the WM Waste Mustang pulled away gently from the Torana before ultimately taking the win by just under one second. It was Johnson’s second win of the year following success in the first race in Adelaide to open the season and came after the team worked their way through several brake-related issues throughout practice, qualifying and the first race.

With Bowe second, attention turned to the fight for third with Ryan Hansford forced to hold off a racy Adam Bressington in the closing stages. Hansford started third and ran a lonely race in the Multispares Torana until Bressington closed at the end; ultimately falling just short.

Earlier in the day Jason Gomersall broke through for his first Paynter Dixon Touring Car Masters race victory in the Dometic TCM trophy race. Gomersall started from pole position however his path to victory was far from easy, fending off early challenges from Cameron Tilley and then Andrew Fisher before Freestone took up the charge for a majority of the race.

The pair battled on the final lap with Gomersall defending heavily into the hairpin, setting up a drag-race down the back straight into turn six. With the inside line, the Torana was able to hold out the Camaro to edge out a remarkable victory by less than a car length.

“Was that race 50 laps?” Gomersall smiled afterwards. “Because it sure felt like it. It’s a great feeling. It was a bloody hard race but it’s awesome to finally break through. Cameron was there early, then the Jesus Racing car and then the purple thing turned up.

“It was a hard race with Paul but it was very clean. I went a bit too defensive at the hairpin on the final lap and had to make sure I committed on the inside into turn six at the end of the back straight. I was able to hold on… and it’s awesome.”

Freestone’s second place was his best ever TCM race finish while Bowe once again stormed from the back however could not progress further than third as the two leaders furiously battled. Leo Tobin finished an outstanding fourth after a quiet race, Adam Bressington behind him in fifth.

The Paynter Dixon Touring Car Masters field returns for another pair of races tomorrow to complete the second of eight rounds set for 2018.