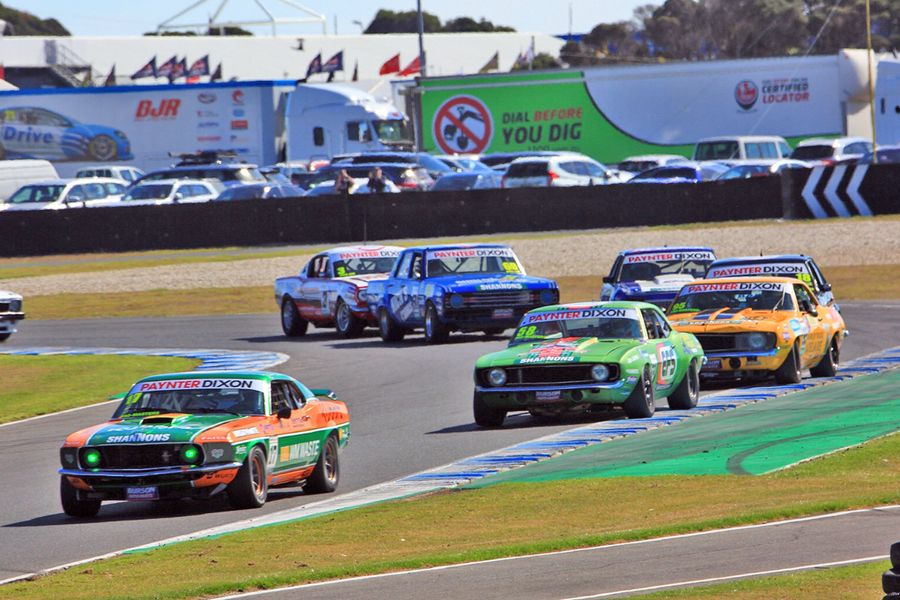 The opening of the 2019 of Paynter Dixon Touring Car Masters season has produced the perfect start for Steven Johnson. The Ford Mustang driver won race six today and is undefeated in his quest for a third straight title.

"I don’t want to jinx myself but keeping your nose clean is the thing to do to win these races," he said. "I know we have won before but never like this. We have always had a steady start to the year, so I am very happy – the cars has been great.

The day didn't pass without drama. "No! The car had a lot of front wheel wobble," he confirmed. "Because the cars are basically still standard in the front end, they do get wobble and it gets worse. There was so much shake, I literally couldn’t see the start lights."

Johnson continued to dominate the Pro Masters, Adam Bressington (Chev Camaro) crossed the line second but received a post-race penalty which dropped him to fifth. Thomas Randle (Mustang) stormed through from the back of the field to be classified second ahead of John Bowe (Holden Torana A9X).

In a race that had its share of dramas, Pro Am race honours were with Jim Pollicina (A9X) in fifth until he too was shuffled down the order with a time penalty and Jeremy Gray (Ford Capri Perana) was classified fourth and also took the Pro Sports class laurels.

Randle was on a big charge, moving ahead of Mason on the second lap and picking off another spot when Tilley retired with a badly flat-spotted front tyre. Then Gary O’Brien (HQ Monaro) speared off backwards at turn two, which required a safety car period. The car only took a lap to extract from the sand trap and racing resumed.

Johnson consolidated in front while Bressington came under fire from Randle who moved to third when Bowe had a wheel lock-up at turn nine. Randle applied the pressure to the Camaro driver but ran wide at the Hayshed when the two touched.

Randle resumed behind Bressington and ahead of Bowe. Meanwhile there was angst between the Torana drivers Williams, Ryan Hansford (A9X) and Pollicina down and through turn nine. Hansford was loose and was brushed by Pollicina who then had contact with Williams, and the latter came off worse.

Over the concluding laps, Pollicina was further embroiled in a dogged fight with Gray and they crossed the line fifth and sixth, line astern and ahead of Harris, Hansford, Williams in the first of the Pro Am drivers ahead of class rival Mason in tenth.

While Johnson’s success also reaped him the weekend’s Pro Masters winning dividends over Bressington and Bowe, Williams took the overall Pro Am class on a countback, having tied for points with Mason. Gray headed up Pro Sports in front of Boughen and Gibbons who tied with Middleton.

Round three of the Paynter Dixon Touring Car Masters which will feature races seven, eight and nine, takes place at Winton on May 24th-26th.