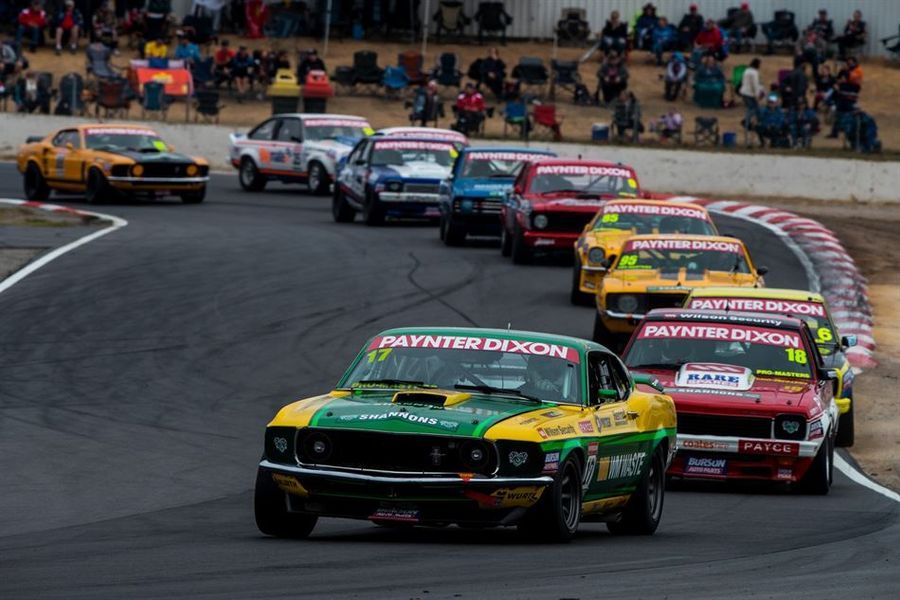 Steve Johnson won his fourth straight Paynter Dixon Touring Car Masters series race, leading John Bowe in a straightforward battle for the lead in race seven of the year at Winton today. Starting from pole, Johnson led Bowe into turn one and was never headed across the 12-laps, though the pair were pushing hard out in front.

Johnson’s fastest lap was just 0.3 seconds behind Bowe’s Winton Raceway lap record as he edged away to a two-second lead for much of the race. Bowe closed the margin in the closing laps but never looked to challenge the otherwise dominant WM Waste Team Johnson Mustang.

His fifth win of the year was also the first for a car with an engine bigger than five litres at Winton since 2014, when Tony Karanfilovski won in his similar Mustang. Johnson’s win, coupled with his five bonus points for pole position, was the 24th of his TCM career (equalling Jim Richards tally for third on the all-time winners list) and closed the points margin to series leader Bowe down to just 30 markers.

Ryan Hansford had a lonely race to third in the Multispares Torana, while Adam Bressington had a similarly quiet run to fourth in his VDC / Whiteline Racing Camaro. Bressington was tailed home by teammate King – the only dramas the yellow pair suffered was the lightest of contact between the pair on the opening lap rush through the first chicane.

The battle of the race was the one waged for sixth and seventh between Andrew Fisher and Cameron Tilley. Though slightly faster, Tilley’s Valliant Pacer was unable to work his way past the Jesus Racing Falcon despite multiple attempts – the falcon better out of the corners and the Pacer quicker through them.

Their battle also dragged the ACDelco Torana of Bruce Williams into the mix. Williams went down the inside of Tilley at turn three, the pair running side by side through the exit on the run to turn four. With Tilley holding his ground with no road remaining on the outside, the two made contact, Williams spinning across the front of the blue Valliant and into the sand at turn four. He quickly extracted himself and recovered to finish tenth behind Jason Gomersall and Tony Karanfilovski.

Outside the 10, a highlight included an entertaining battle between the Ford Escort RS of Nathan Geier and Rob Burns’ considerably more powerful HQ GTS – in it’s first TCM race. Aaron McGill also completed his first TCM race as his XW GT Falcon made it’s first start from the back of the grid, running consistently to finish 16th.

Cameron Mason and Graham Crawford failed to finish – Mason’s Mustang cutting out with an electrical issue after 11 laps.

The Paynter Dixon Touring Car Masters series continues on Sunday with races eight and nine of the 2018 championship.

Earlier, John Bowe charged from 19th to first in the Dometic Trophy Race on Saturday morning. While other ProMasters runners took a more conservative approach, Bowe went all-out in the Wilson Security Torana and carved his way through the field.

Tony Karanfilovski led the race early from the outside of the front row, though he was soon passed by Jason Gomersall’s BigMate A9X Torana. The pair held station at the front however were quickly chased down by Bowe as he stormed through the field, the five-time champion ultimately passing Gomersall with a bold move around the outside of turns three and four on the final lap.

Gomersall and Karanfilovski maintained their positions relative to each other in second and third, while Williams charged his way to fourth and Andrew Fisher fifth. Jim Pollicina (Who broke a clutch in the series race later on), Ian Woodward, Graham Alexander, Mark King and Cameron Tilley completed the top ten in another entertaining affair.