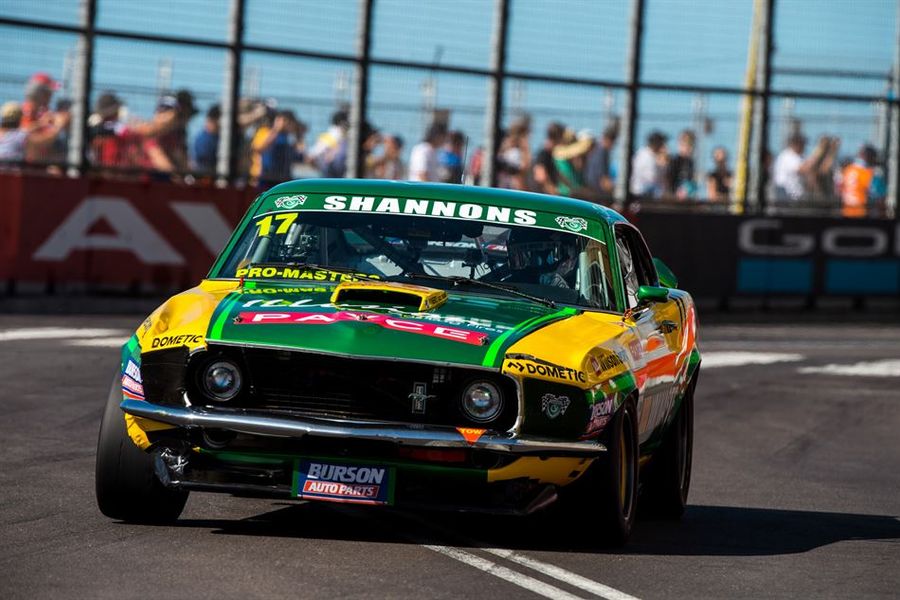 Steven Johnson has sensationally won the 2017 Touring Car Masters title after overhauling old family friend and teammate John Bowe in the final round. Johnson entered the final round of the 2017 season five points behind Bowe however a pair of race victories at the Coates Hire Newcastle 500, including a tension-filled 12-lap finale, saw him take the title by 11 points.
His title success is the first national championship the 43-year-old has won in his lengthy career, stretching back to his racing debut in 1993 behind the wheel of a Datsun Sports Sedan. It also comes just nine months following the formation of the family-run Team Johnson outfit, established and launched at the Adelaide 500 earlier this year to support his TCM campaign behind the wheel of the WM Waste Ford Mustang.
Early reliability issues saw him struggle in the opening few rounds however a late season flourish, including four straight race victories, saw him power home to seal the title. He ultimately edged out Bowe by just 11 points, the closest championship winning margin in TCM history.
“We’ve had half a tilt at the championship before, when I got to drive John’s car a bit in 2015 and then again last year thanks to Tony Karanfilovski,” Johnson said. “The opportunity came up to put together the team for this year for our first full tilt properly and it’s been an up and down year – the first time I led the championship was race one this morning.
“It’s a mega feeling to win the championship. There’s been opportunities in the past that haven’t happened, and not for a lack of trying or the circumstances involved. As a team we’re all really close and I feel happy and proud with the way w did it this year. It’s a great little team with the family and great friends involved.
“We had mechanical issues at Adelaide and the boys were all really down on themselves after that and worked their asses off to make sure it didn’t happen again – and it didn’t. We clawed our way back from a long way behind and it’s unreal.”
Johnson said he wasn’t thinking too much about the title battle entering today’s final race where it was all on the line.
“I tried not to think about it too much because when you start thinking about it and what could happen, and what couldn't happen, you tear yourself up inside,” Johnson said of his win in the final race. “Even though it's TCM, I think nowadays the competitiveness in this category has just stepped up so much and for anyone to think that it's easy to win a TCM championship is very wrong.
“Coming into this last round 5 points behind, when there's only 4 points difference between first and second, it made it pretty tough. We had to have a good weekend, I was hoping to get pole position and get that five-point buffer back. We didn't get that, and I was really down on Saturday, but it's all turned around today.”
Johnson also secured the round victory over Ryan Hansford and Adam Bressington – who edged out Bowe for the final spot on the overall podium thanks to finishing higher in the final race.
Bressington also secured third in the championship, but threw everything he could at winning in the final round. The Whiteline Racing Camaro crossed the line first in race one however was penalised 5 seconds for being out of position on the rolling start – handing Johnson the win.
The race was the 250th in Touring Car Masters history and would ultimately be the deciding factor in this year’s championship.
Bressington then charged forward in race two, leaping from fourth to second with an aggressive run into turn one. From there he hounded Johnson for the full duration while at the same time defending from Bowe in third. The pair crossed the line nose-to-tail in a tense finish, though neither Bressington nor Bowe were able to top Johnson’s Mustang in the end.
There were mixed results for several key contenders in today’s racing; with several running well in race one but failing to fire in the second. Bruce Williams, Cameron Mason, Jason Gomersall, Tony Karanfilovski, Cameron and Brad Tilley completed the top-10 in race one behind the title contending top four.
Karanfilovski was the big over in race two, however, storming to fifth place as others struck drama. Mason failed to take the start and Williams failed to finish – both with mechanical issues – while Gomersall was turned around following light contact with Brad Tilley as the pair battled for position in turn nine.
That elevated Brad Tilley to sixth and Cameron Tilley to seventh. Wayne Mercer, Mark King and Jim Richards completed the top-10.
Bressington won the ProAm class title over Hansford and Tasmanian Adam Garwood, while Darren Beale won the ProSports series narrowly over Leo Tobin and Bob Wisely.
The 2018 Touring Car Masters series will commence at the Adelaide 500 in early March next year.
Final Points Table:
Steven Johnson 917 (ProMasters 1)
John Bowe 906 (ProMasters 2)
Adam Bressington 881 (ProAm 1)
Ryan Hansford 818 (ProAm 2)
Adam Garwood 657 (ProAm 3)
Eddie Abelnica 629 (ProMasters 3)
Tony Karanfilovski 651 (ProAm 4)
Cameron Mason 551 (ProAm 5)
Jason Gomersall 565 (ProMasters 4)
Mark King 557 (ProMasters 5)
Darren Beale (ProSport 1) 491
Leo Tobin (ProSport 2) 477
Bob Wisely (ProSport 3) 401