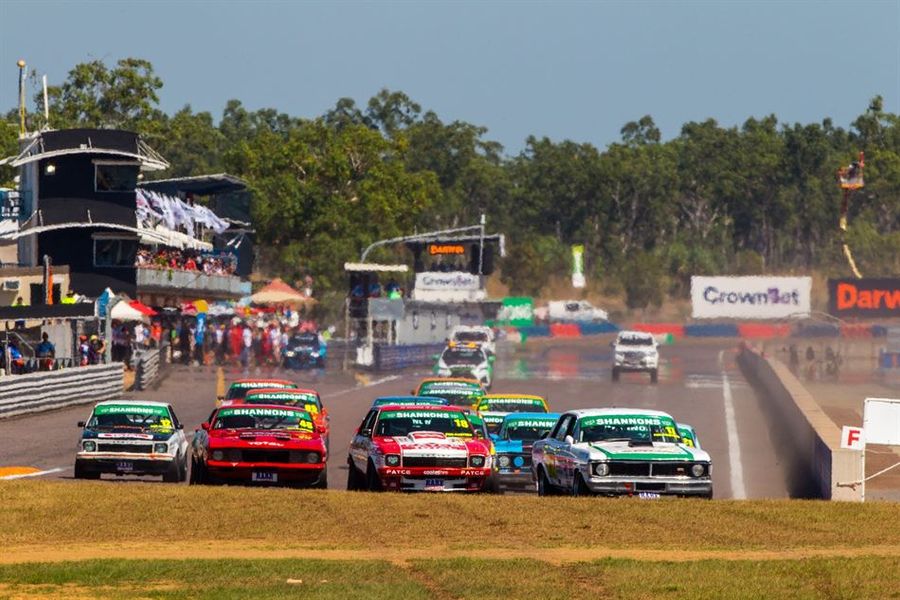 Steven Johnson has claimed back-to-back Touring Car Masters round victories at Hidden Valley Raceway, storming to victory in the Shannons Thunder in the Valley in his Falcon GTHO this weekend. Johnson brilliantly won races one and two driving the Synergy Race Engines Falcon before finishing 10th in the Waeco Trophy Race late on Sunday to seal the round result and close to within nine points of John Bowe in the ProMaster class championship.
Meanwhile, Wayne Mercer stormed to victory in the 10-lap, reverse-grid Trophy encounter late on Sunday afternoon, recording his first ever TCM race victory. The win etched the popular Victorian driver into the record books as the 8th different winner from 12 races this season – the first time there has been more than 7 winners in a single TCM season.
The Darwin round also marks the first time all three races of a single round have been won by Ford’s famous XY GTHO Falcon. Having won the opening race on Saturday, Johnson repeated his supreme defensive performance in race two, repelling attack after attack from John Bowe first and then Glenn Seton later in the race.
Bowe shadowed his former teammate for the early stages of the race before an attempted overtake around the outside of turn one went awry and he ran off the road – ultimately finishing fifth. With two laps remaining Seton then took up the mantle of aggressor, working over the rear bumper of Johnson’s Ford in a classic battle to the flag though Johnson was good enough in defence to hold on for a narrow victory.
With Seton second, Eddie Abelnica finished a strong third and Jason Gomersall fourth. The Holden Torana A9X racer had started the race ninth and despite a slow start was quickly able to work his way back to the front of the field, setting the fastest lap in the process.
With Bowe fifth, Jim Richards finished sixth, Andrew Fisher seventh with Mark King, Adam Garwood and Greg Garwood completing the top 10. Wayne Mercer led from pole position in the Waeco Trophy Race, but the race turned out to be another thriller that required a Falcon GT to defend from several leading combatants.
Tony Karanfilovski was the main attacker, working his way to second behind the blue Falcon by mid-race. The pair battled side by side for several laps before making his move with two laps remaining. Unfortunately the yellow Mustang ran wide and off the road, the Sydney driver recovering to finish 10th after a strong performance.
Rusty French ultimately finished second, while Glenn Seton stormed from 14th to 3rd to continue his strong run of reverse-grid form.
Adam Garwood finished fourth, ensuring the young Tasmanian has finished inside the top six in every Trophy race this season. Greg Garwood completed the top five having led the race early in his Ford Capri Perana.
John Bowe had looked a likely winner of the Trophy race, however pulled to the side of the road on lap four with no power in his Holden Torana.
Johnson’s superb performance at Hidden Valley closes him to just 9 points of the ProMaster class series lead at the halfway point of the 2016 TCM series, the Falcon driver’s 608 points trailing Bowe’s 617.
Eddie Abelnica remains the model of consistency and retains third in the standings while Glenn Seton now sits just 97 points from the series lead in fourth.
Just 158 points – less than a full round – split first to sixth in the ProMaster Class.
Jason Gomersall edged out his lead over Andrew Fisher in the ProAm class, Holden Torana leading Ford Falcon in ProAm as it does in ProMaster. The margin between the pair stands at 74 points, with Tony Karanfilovski third. Adam Garwood continues to top the ProSports standings in his Sunliner RV Holden Torana SL/R 5000.
The next round of the 2016 Touring Car Masters series – the Rare Spares Queensland Tourist Trophy - will be contested at Queensland Raceway on July 22-24 with the Supercars Championship.
Hidden Valley Raceway Touring Car Masters Steven Johnson Falcon GTHO Shannons Thunder in the Valley