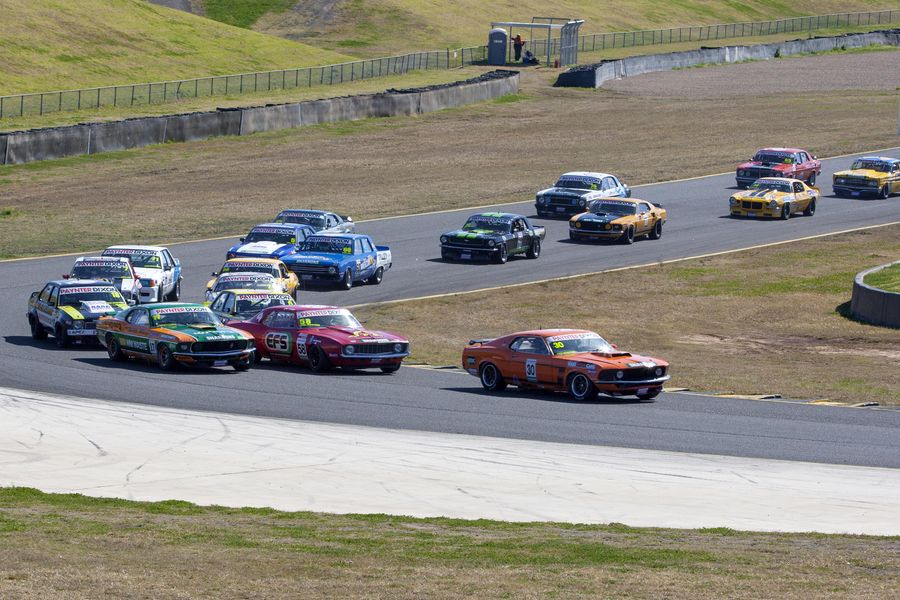 Real Haris has won his first Paynter Dixon Touring Car Masters event, the EFS Racing Chevrolet Camaro finishing in the top three in every race at Sydney Motorsport Park to secure a dramatic fifth round of the series. Harris won Race 15 of the championship on Sunday morning before finishing second in Race 16, backing up his third-placed effort in the opening race on Saturday afternoon.

Both races in Sydney featured last-lap passes for the lead thanks to Harris in Race 15 and a clutch win from John Bowe – his first of the season – in the finale. Queenslander Harris became the third winner from the past three TCM rounds, setting up a two round showdown at Bathurst and Sandown to decide the championship with just 67 points now covering leader Steven Johnson, John Bowe and Harris, who is third.

Harris has been a potential contender in each round following his debut at the Adelaide 500 earlier this year, winning his first race and finishing second overall in Queensland last time out. His Camaro was instantly competitive on arrival in Sydney and the Ute racing champion was in the mix in every race.

“It’s a good feeling to get our first win in the EFS Camaro in our first season,” Harris said. “We’ve got a long way to go with the car and there’s some playing ‘funny buggers’ out there, but we’ve got to go back to the drawing board with the handling of the car before Bathurst because otherwise it won’t be nice to drive there.

“We are making progress though, and it’s great to get that round win and it’s good for the points as well so we’re making lots of progress.”

Aaron Seton, not in championship contention, finished second overall for the weekend thanks to a win and a pair of fourths. His strategic drive ensures he’ll head to Bathurst with a full complement of revs on board his Ford 302 engine; finishing off the podium in both Sunday races to negate successive 100rpm penalties brought by winning with regularity in recent rounds.

A consistent Ryan Hansford finished third overall in Sydney with the Multispares Torana creeping ever closer to the outright pace via a fifth and two thirds this weekend.

Sunday’s two races were each thrillers with action on every lap.

Harris won Race 15 with a pass for the lead on the final lap, as early leader Seton slipped back to fourth by the line. Seton led the race early while Harris found himself caught behind Steven Johnson as the field ran to turn one.

He quickly slipped by and applied pressure to Seton before the positions changed on the final lap. While Hansford also slipped through the championship leader to grab third, Johnson and John Bowe battled intently behind.

Once Seton slowed, Harris spent the last lap defending from John Bowe as the Torana ranged up behind the Camaro in the closing stages, Bowe falling agonisingly short – just 0.1 seconds behind at the line. Hansford finished third and Seton fourth, the latter also re-setting a five-year old Sydney Motorsport Park lap record in the process.

Race 16 was a pulsating affair as Harris burst of the line, beating Seton into turn one to take an early lead.

An early Safety Car on the second lap – Rob Hackwood’s Pontiac was stranded on track with a broken throttle cable – closed the field however the pair ran line astern until lap five when Seton attacked for the lead at turn one. The pair ran in close company until the final lap when Harris passed Seton at turn six.

However, the race wasn’t over yet with a fast-finishing Bowe overhauling Harris at the line to take a come-from-behind victory in remarkable fashion.

The five-time champion had run fourth at the start of the final lap however passed Hansford for position on the final lap and then sliced past a slowing Seton within sight of the line. He then blew past Harris as the field reached the line to record his 97th championship race win and end a remarkable 23-race winless streak; the longest in his career.

Harris finished second to secure the round while Hansford – who started the final lap in third, was passed by two cars yet still finished third – locked in his spot on the podium with another consistent finish. Championship leader Steven Johnson banked a pair of fifths on Sunday to continue to retain his position the top of the standings.

The Sydney driver was the star of the show in the final race, storming through the field after a spin in race two to finish seventh. Marcus Zukanovic, Cameron Tilley and Bruce Williams completed the top-10 finishers in each race on Sunday.

Notably, a trio of consistent races delivered Allen 'Cusso' Boughen the class victory in ProSports after a rough time of late with his Mercury Comet.  After enduring a damaging round in Queensland, Cusso finished each race in Sydney to win the class.

The next round of the Paynter Dixon Touring Car Masters series will feature at the Supercheap Auto Bathurst 1000 this October.