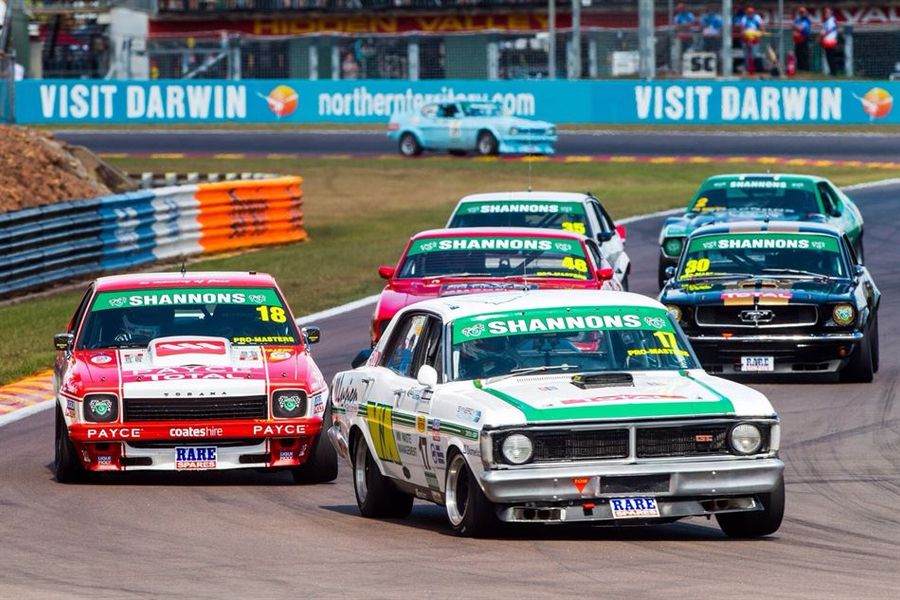 A powerfull performance has seen Steven Johnson add his name to the ever-growing list of race winners in a stunning 2016 Touring Car Masters season. The second-generation Ford hero powered his Synergy Race Engines Ford Falcon GTHO from third on the grid to the race lead by the first corner of today’s 10-lap Shannons Thunder in the Valley opener, spending the rest of the race battling with old teammate John Bowe for the victory.

Bowe threw everything he could at Johnson in a classic Aussie Ford-versus-Holden fight but ultimately couldn’t work his way past the big Falcon: a car particularly strong down the long Hidden Valley front straight Bowe would continually attack through the tight section of Hidden Valley’ 2.87 kilometres, only for Johnson to pull away down the long straight. It was Johnson’s third win at Hidden Valley and the eleventh of his TCM career – but more importantly added his name to the list of six other drivers to have won in the championship this year. It also equals the record for the most number of different winners in a single TCM season after just 10 races of this year’s ultra-competitive title fight.

Bowe finished second in his Wilson Security / Payce Torana, spending his entire race either attacking Johnson or fending off long-time Touring Car / Supercar rival Glenn Seton. Seton took third today to continue his strong run of recent form, an aggressive drive from fourth on the grid putting him in good stead for tomorrow’s two races. The former two-time ATCC / Supercars champion is proving to be a model of consistency this year with today’s result his fourth, third-place effort from the 10 races contested to date this year.

Jim Richards finished fourth and Tony Karanfilovski a superb fifth – first of the ProAm runners’ home – after several leading contenders removed themselves from contention late in the race. One of them was Holden Torana A9X driver Jason Gomersall, who started from the front row and looked a likely contender for victory before a gearbox issue saw him lose positions on the run to turn one.

With the car struggling to engage third gear, Gomersall dropped from narrowly leading Bowe to end up fifth at the end of lap one. The iSeek Racing driver quickly worked his way back towards the front of the field, passing Eddie Abelnica on lap two and Seton on lap three to return to contention with leaders Johnson and Bowe. However the gearbox issue returned the following lap, allowing Seton to re-pass the Torana to grab third place.

Gomersall then shaded Seton for a further three laps before he attempted an outside pass at turn one on the eighth lap – unfortunately spinning off the road having been unable to stop the car once past Seton. Eddie Abelnica – fifth at the time – was caught up in the incident and dropped several spots while taking evasive action: Abelnica ultimately finishing sixth and Gomersall ninth.

Behind the leaders, Andrew Fisher had a quiet race to seventh place in the Jesus Racing Falcon, Mark King finished eighth in the King Springs Camaro and Wayne Mercer grabbed a solid tenth place (having been overtaken by a recovering Gomersall on the final lap) in his Falcon GTHO.

Only one driver failed to finish today’s 10-lap affair that was held in hot and extremely humid conditions. Cameron Tilley retired his Valliant Pacer on the opening lap having earlier done the same after just three laps in qualifying. The popular Sydneysider reported similar issues to those experienced in the opening round at the Clipsal 500 Adelaide, relating to the engine of the six-cylinder Pacer.

The team will work this afternoon to rectify the issue and return to the circuit for tomorrow’s two final races that complete the Shannons Thunder in the Valley.