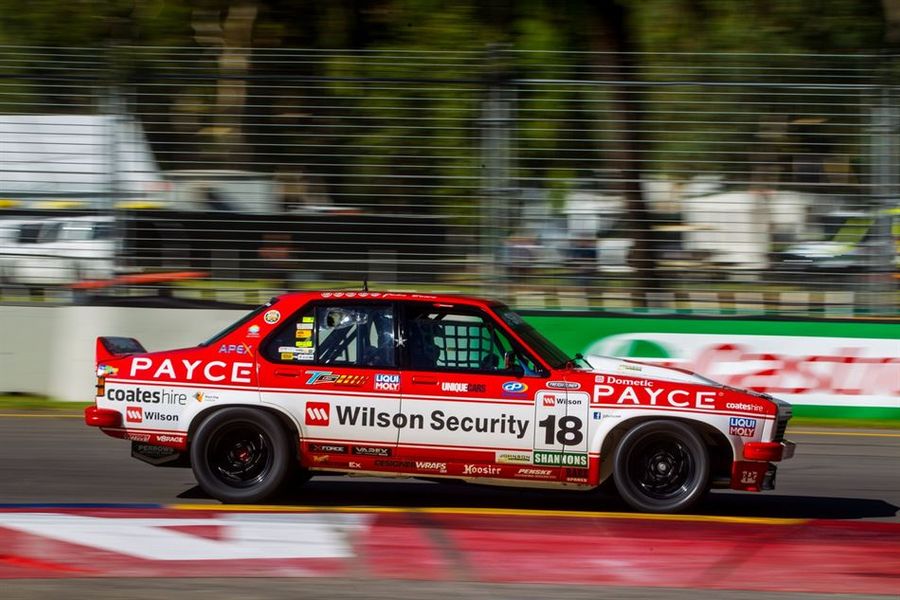 John Bowe edged out Steven Johnson to score his seventh Clipsal 500 pole position today in qualifying for round one of the 2017 Touring Car Masters series. Bowe’s best of 1m28.87s was 0.3 seconds quicker than Johnson as the pair set up a potentially classic season opener tomorrow.
Today’s effort was Bowe’s seventh pole at the Adelaide venue and continued his streak of starting on the front row every time he competes in the category at the famous street circuit. As is his tradition, Bowe punched out his fastest time on his third lap before retreating to pit lane.
Johnson was lucky to even qualify, after a burst oil line sidelined his Team Johnson Ford Mustang mid-way through the 20-minute session and just moments after he had jumped to second place. The Ford was forced to miss the second practice session earlier in the day due to the same issue, the team hastily making repairs prior to qualifying to enable Johnson to at least make the circuit.
His 1m28.9274s lap was good enough for second grid, banking the time just before the line failed again and forced him back to pit lane.
Ryan Hansford qualified third on his debut in the category, the Multispares-supported Holden Torana having been fast since the first practice session on Thursday morning. Despite having just 30-laps of experience in the car under his belt at a pre-event test, Hansford was quickly on the pace in the yellow and blue Torana, run by notable Queenslander Brett Peters.
A late charge from Adam Bressington saw him haul his No. 95 Whiteline Racing Chevrolet Camaro to fourth place late in the session: The New South Wales driver picking up his strong form from where he left off in 2016. The strong result was also a reward for Whiteline Racing on their home turf – the long-term Adelaide-based TCM outfit based in the city’s Northern suburbs.
Andrew Fisher will start race one fifth in his brand-new Ford Falcon GTHO, the stunning qualifying performance just reward for the team’s more than 12-month long build program. Fisher edged out BigMate Racing’s Jason Gomersall (Torana A9X) on the third row, while the flying Anglomoil Valliant Pacer of Cameron Tilley was seventh.
Adam Bressington’s teammate Mark King qualified eighth, Jim Richards ninth in the Shannons AMC Javelin and Brett Youlden 10th in his HQ Monaro GTS 350. Nine different models were represented in the top-10 qualifying positions during qualifying today.
Sven Burchartz was the first of the IROC Challenge Porsche runners, South Aussies Bernie Stack and Manny Palyaris second and third, respectively.
The IROC Challenge cars will start tomorrow’s race separately, running their own grid behind the main TCM pack for the race one rolling start.
Today’s running wasn’t without drama: Cameron Mason bringing an early end to the qualifying session when an apparent oil line drama saw fluid spilled on his rear tyres. After surviving a spin at turn nine, he then spun again at turn 11 whilst trying to return to the paddock – impacting the tyres and bringing out the red flag.
Earlier in practice, open-wheel star Thomas Randle was taken out of the event almost before it even began: caught in the oil from another car on the high-speed entry to turn one, where he impacted the tyre barriers in the Senna chicane. Unfortunately the damage to the Skye Sands Mustang was too much to repair to return it to action this weekend.
Local favourites Greg Keene and Amanda Sparks both suffered engine issues in their respective Porsche 911RSs, casting doubt on their participation for the remainder of the weekend.
This year marks the 10th visit to the Clipsal 500 Adelaide for the Touring Car Masters Series – and in the nine previous visits the driver to score pole has gone on to win the first race on only four occasions. Race 1 will be contested over 10 laps on Friday, March 3, starting at 1:55pm local time.
Adelaide TCM Touring Car Masters Johnson Bowe