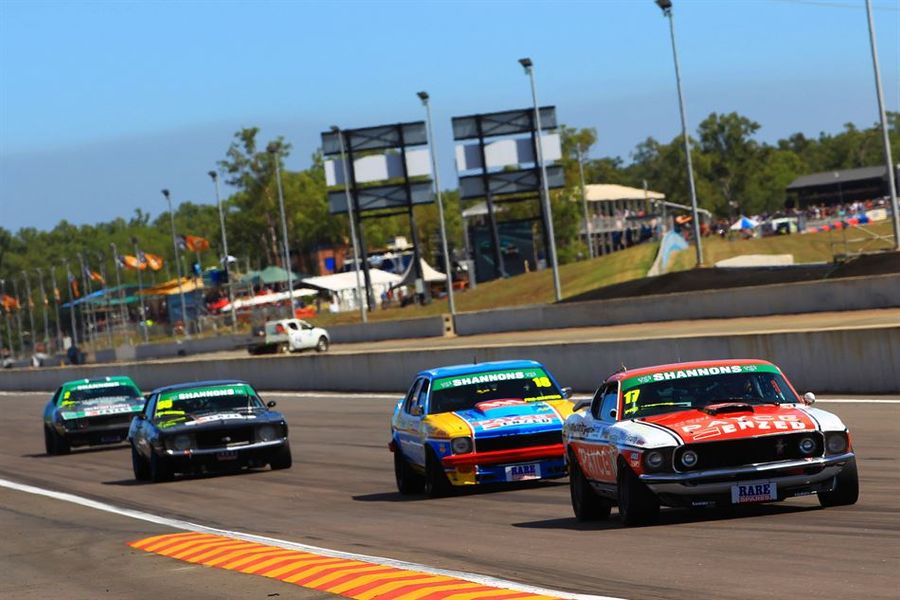 Steven Johnson and John Bowe put on a show in race one of the ENZED Touring Car Masters in Darwin - swapping the lead twice in a great opening race. Having started from second on the grid, Johnson won from Bowe, with Andrew Miedecke and Jim Richards following them home in close company - the four getting the flag line astern.

Johnson led from the race start, heading Bowe and Miedecke into the opening corner as the field got away cleanly. Greg Crick was the early mover, moving from fifth to fourth in the opening two corners and then challenging Miedecke for third at turn five – however the big Charger ran wide on the exit of the corner and dropped to ninth at the end of the opening lap.

Polesitter Bowe wrestled the lead away from Johnson on the start of lap four, passing down the inside at turn one to assume the lead. He set a new TCM lap record (1m13.8833s) on lap four as he tried to extend his lead, however Johnson continued to apply the pressure and re-passed his teammate (and car owner) to grab the top spot back two laps later as the pair ran side-by-side down the 1.1km-long front straight.

Now joined by Andrew Miedecke and Jim Richards, Bowe continued to apply pressure to the rear bumper of Johnson’s Mustang for the remainder of the race however couldn’t make an impression and ultimately settled for second. With Miedecke third and Richards fourth, Jason Gomersall moved to fifth place mid-race when he passed Gavin Bullas’ Ford Mustang – ultimately finishing strongly in that position.

Greg Crick ultimately finished 12th in the Mopar Charger, behind the similarly recovering Andrew Fisher. Mark King was running strongly inside the top-10 before a spin at turn one dropped him down the order, finishing one spot ahead of Eddie Abelnica’s XB Falcon.