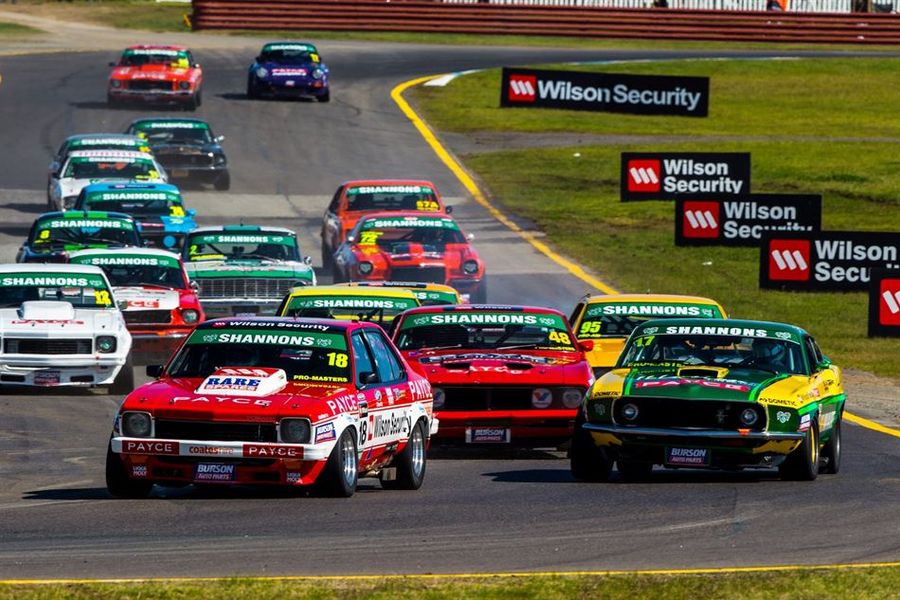 Less than 20-points cover the top three drivers as the Touring Car Masters series readies for the annual trip to Mount Panorama this October, thanks to a pair of Steven Johnson victories at Sandown this weekend. Johnson powered to a Sunday race victory at Sandown after yet another race-long battle with John Bowe.
The Holden Torana ace started from pole and led the field into turn one, Johnson retaining close company for the first two laps before he pounced on the third to take the lead. He retained a narrow margin over Bowe for the remainder of the race as the pair embraced retro round with a one-two Johnson-Bowe finish.
The battle for third was the highlight of the race, with Eddie Abelnica, Adam Bressington and Ryan Hansford battling furiously for much of the race.
Abelnica held third for the first seven laps, before a small mistake at turn one on the start of the eighth saw Bressington and Hansford pounce and relegate the Falcon to fifth in the space of just a few corners. Hansford then attacked the Whiteline Racing Camaro, but had no answer for the more powerful Chevrolet until the final few corners of the race – when the pair came across Bob Wisely’s Torana.
With the briefest of hesitation by the Camaro, Hansford pounced and in a drag race out of the final corner beat Bressington to third place by 0.001s. Abelnica finished fifth, while Jim Richards continued his record of strong performances at Sandown to storm his way through from 10th place at the start to sixth.
Terry Lawlor completed an excellent return for his Ford Mustang by finishing seventh, while Cameron Mason, Geoff Fane and Mark King completed the top-10.
Two missing from the front of the field were Tony Karanfilovski and Adam Garwood, who were caught up in an accident on the opening lap, exiting turn four. The pair were running side-by-side but contact saw Garwood spun across the field before making light contact with the outside wall – ultimately retiring to pit lane, while Karanfilovski was penalised with a drive-through penalty for his role.
Bowe’s five bonus points for pole position saw him win the round overall, despite Johnson winning both races contested – race two on Saturday abandoned after one lap following Jason Gomersall’s hefty impact at turn six. Bowe has broken the deadlock with Adam Bressington to take a clear championship lead heading to Bathurst, though just 13 points split the pair heading to the Camaro’s best circuit.
Johnson now sits just 18 points from Bowe in third place, while Hansford remains fourth but less than sixty points from the top of the standings. Bowe (ProMaster), Hansford (ProAm) and Graham Alexander (ProSports) won their respective classes overall this weekend.
Saturday’s race two was stopped on the opening lap after Jason Gomersall went off heavily in his Torana and declared a non-race. Gomersall was unharmed, the incident can be viewed here:
http://www.supercars.com/videos/support-categories/major-crash-for-tcm-torana/?sf114562229=1
Race Three Result
1   Steve Johnson (Ford Mustang Fastback) 10 laps in 12m41.8430s
2   John Bowe (Holden Torana SL R) +0.6119s
3   Ryan Hansford (Holden Torana SL R)
4   Adam Bressington (Chevrolet Camaro SS)
5   Eddie Abelnica (Ford Falcon XB Coupe)
6   Jim Richards (Ford Falcon Sprint)
7   Terry Lawlor (Ford Mustang Coupe)
8   Cameron Mason (Ford Mustang Fastback)
9   Geoff Fane (Chevrolet Camaro SS)
10  Mark King (Holden Monaro GTS)
Fastest Lap: Johnson 1m15.6827s