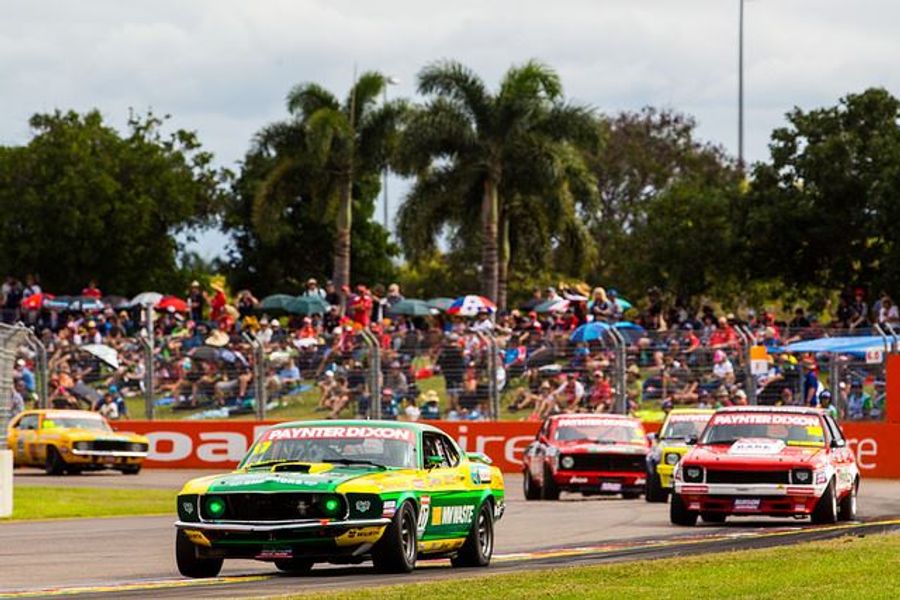 A lights to flag win etched Steven Johnson into the record books as the first ever winner of a Paynter Dixon Touring Car Masters race on the streets of Townsville. The WM Waste Team Johnson Ford Mustang driver led from lights to flag in today’s 12-lap affair, the 13th race of the 2018 championship chase.

He headed home John Bowe by less than one second, with Adam Bressington completing the podium having charged his Whiteline Racing Camaro through the field from seventh on the grid.

Today’s race saw the top three drivers in the series lock out the top three; Johnson’s pole and victory edging his margin over Bowe to 30 points ahead of races 14 and 15 tomorrow. Bressington remains third in the standings, 170 points behind the dynamic duo leading the way.

Starting from pole, Johnson made the perfect start and easily led the field through the flat-out kink at turn one and towards turn two. Ryan Hansford pushed the Multispares Torana to third place on the opening lap, however that was as far forward as the Queenslander would go.

On lap two his car hesitated exiting the second corner and soon slipped through the field, Hansford battling gearbox issues. At the end of the second lap he was tapped into a spin in the final corner by Jim Pollicina, who was passing Jason Gomersall at the time – compounding his issues. Pollicina was penalised for the contact and served a drive-through penalty, ultimately finishing eleventh.

The race settled down with Fisher trailing the two leaders, though Adam Bressington was the man on the move. Bressington had charged to fifth from seventh on the opening lap and inherited fourth when Hansford’s issues became apparent.

He then spent several laps engaged in a competitive battle with Fisher, ultimately slipping past on the eighth lap. Fisher retained fourth for three further laps however a right-front puncture slowed the Jesus Racing Falcon with two laps remaining, dropping him down the order.

He lasted one lap before the flailing tyre began to damage the guard, Fisher ultimately forced to retire his car as well.

A starring performance from Rob Hackwood saw Wellpro Racing score their best ever TCM result in sixth position, on their debut of the Pontiac Firebird. The Queenslander started eighth and ran seventh for a majority of the race, climbing one position further in the final two laps as Fisher slipped back through the field.

Tony Karanfilovski worked his way forward from 12th on the grid to 7th at the line, with Cameron Tilley just behind.

Ian Woodward – who charged from 13th to 9th – and Wayne Mercer completed the top-10.
Mark King had run strongly in eighth for much of the race, however a mishap two laps from home saw him drop out of the 10 – ultimately finishing 12th.