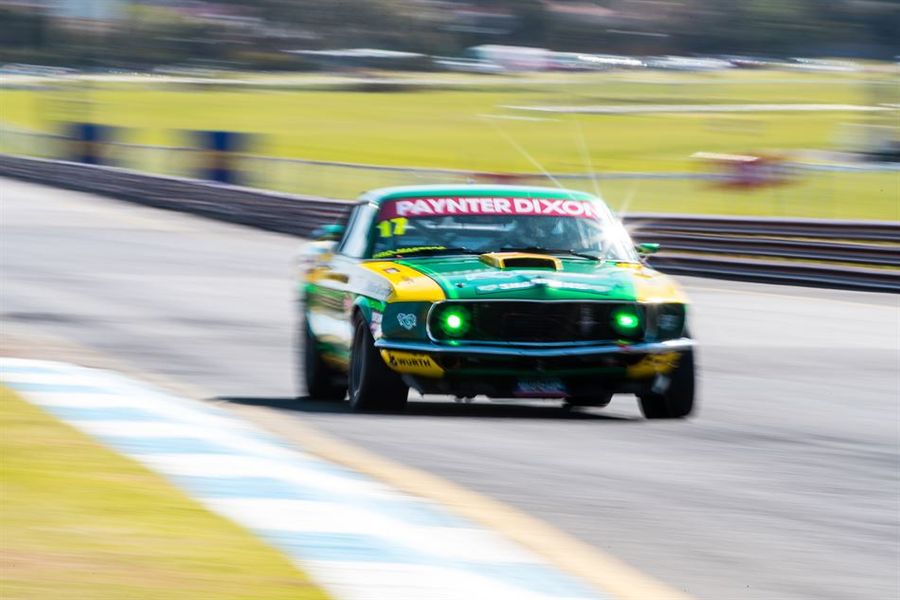 Steve Johnson needed only four laps to take his fifth pole position of the Paynter Dixon Touring Car Masters season today at Sandown. His qualifying session comprised of one out-lap, two flyers and an in-lap and the resulting 1m15.0445s lap it produced stands as a new series qualifying record at the 3.1km circuit in Melbourne.

It was Johnson’s fifth pole from six attempts this year – the other round he qualified second – and the 12th of his career in the category. Once again Johnson will share the front row with John Bowe, the pair having locked out the front of the grid at every event this season to date – but it wasn’t quite so straightforward for the five-time TCM champion.

His Holden Torana sat third for a majority of the session - behind a starring Jason Gomersall in the BigMate Racing A9X who looked set to qualify on the front row of the grid for the first time since Winton last year. It took nine laps for Bowe to get himself on the front row, his last-ditch flyer just hundredths ahead of Gomersall but enough to put Torana Sedan in front of Torana Hatch on the grid.

Both, however, were 0.87 seconds behind Johnson’s flyer which now stands as the biggest pole-winning margin of the year.

Adam Bressington professed himself pleased with the 1m16.21s lap that put his VDC / Whiteline Racing Camaro fourth. Ryan Hansford qualified fifth – 0.2 seconds behind Bressington – while a starring effort from Paul Freestone saw him leap into the top six in the closing stages of the session. While most drivers sat the closing stages of the session out, Freestone enjoyed clear track and set the fastest middle sector of the entire session en-route to the third row of the grid – his best TCM qualifying performance yet.

Marcus Zukanovic posted the seventh-fastest time on the debut of his XD Ford Falcon in what was only the sixth time the car had been on track, showing the potential within the car by jumping straight into the highly competitive top-10 battle within the class. He out-qualified Cameron Tilley, who was still coming to terms with the new horsepower aboard his newly V8-powered Valliant Pacer but was good enough to secure eighth on the grid.

Ninth went to Tony Karanfilovski while Brad Tilley completed the top-10 on his return in the iconic GTHO. Just outside of the first five rows was Brad’s son, Jamie, and Dean Lillie in the Holden HQ GTS 350 Monaro.

The battle for the ProSports class has been tight all year between Jim Pollicina and Leo Tobin, with just one point splitting them in the championship. The pair qualified line astern with Pollicina just 0.2 seconds faster than Tobin as the pair qualified 13th and 14th, respectively.

Mark King endured damage in qualifying when a ball joint broke on the left hand corner of his King Springs / Whiteline Racing Camaro. The Queenslander was able to limp the car back to pit lane and will return tomorrow, however will start the first championship race from 21st.

A bumper Saturday program will see the Paynter Dixon Touring Car Masters series race three times tomorrow at the Rabble.club Sandown 500. The Dometic Trophy Race commences proceedings in the morning at 9:05am before Race 16 of the championship at 12:15pm. Race 17 of the season will complete the day at 17:05pm.