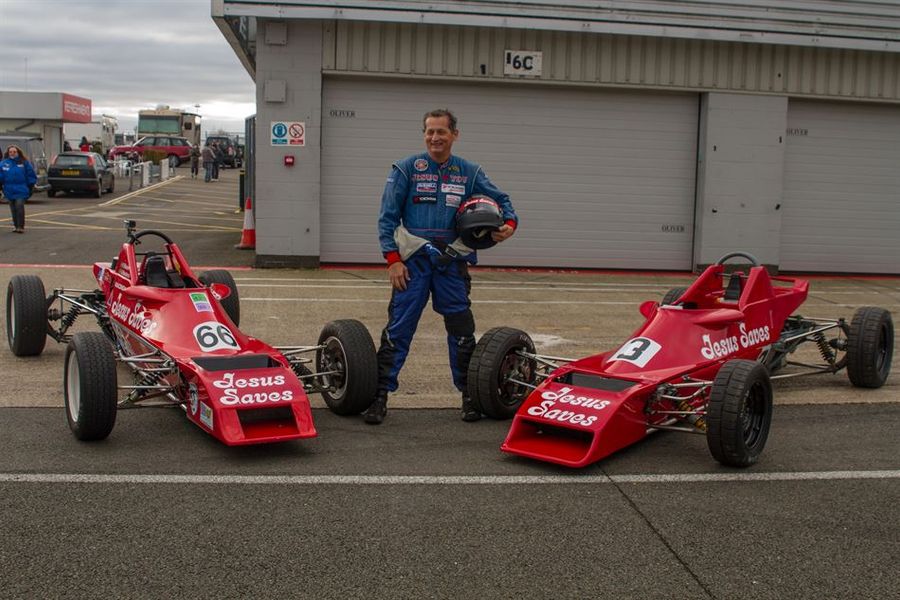 Words: Matthew Upton
Picture: Jim Robertson
Thirty-six years since he originally raced in British Formula Ford, Brazilian driver Fernando Ribeiro returned to the UK to race in the Walter Hayes Trophy at Silverstone at Silverstone on the weekend of November the 5th and 6th.
Fernando – younger brother of Alex Ribeiro, the founder of Jesus Saves Racing and who entered 20-World Championship Grand Prix between 1976 and 1979 – was driving the Team Jesus Saves Racing Van Diemen RF80, which his countryman Adriano Medeiros took to this year’s Historic Formula Ford Championship title.
Coincidentally, the ‘Jesus Saves’ Van Diemen RF79 that Fernando drove in period was competing in the same event in the hands of Tom Brown, and Ribeiro was reunited with the car that he raced during the 1979 and 1980 seasons. During those two years, Fernando scored several race wins and was runner-up in the RAC Championship and third in the European Championship.
“The point here is to be to remember, and to have Jesus Saves Racing together again – it’s great fun!”, commented Ribeiro. “When I was racing in 1979/80 it was an incredibly competitive time in Formula Ford, and I raced against David Sears and Tommy Byrne amongst others.
Being back at Silverstone brought back some memories for Fernando: “I had some great races back then – especially here – when we had some fantastic slipstreaming battles. I remember one race, I had a remarkable battle against Jim Walsh – ‘The King of Silverstone’ –  and we were changing positions all the time. On the last lap, we know whoever was in front on the front straight would lose the race, so neither of us would pass each other, and we nearly stopped our cars! So, he decided to go in front and I passed him, but eventually we both ran wide and two cars passed us, so we finished third and fourth.”
Fernando’s promising early career came to an end in 1980, after he had a personal problem. Fifteen years later he left Brazil and moved to California in the United States, winning two championships and 25-races in the Jim Russell series, but Fernando’s dreams of reaching IndyCar didn’t quite materialise.
Ribeiro proved himself to be a competitive racer throughout the Walter Hayes Trophy meeting, ending the weekend in an impressive eighth, out of a grid 27-cars, in the Historic Formula Ford Consolation race, while Tom Brown ensured that a ‘Jesus Saves’ car was on the podium, coming home in third.
Walter Hayes Trophy Ribeiro Formula Ford FF1600