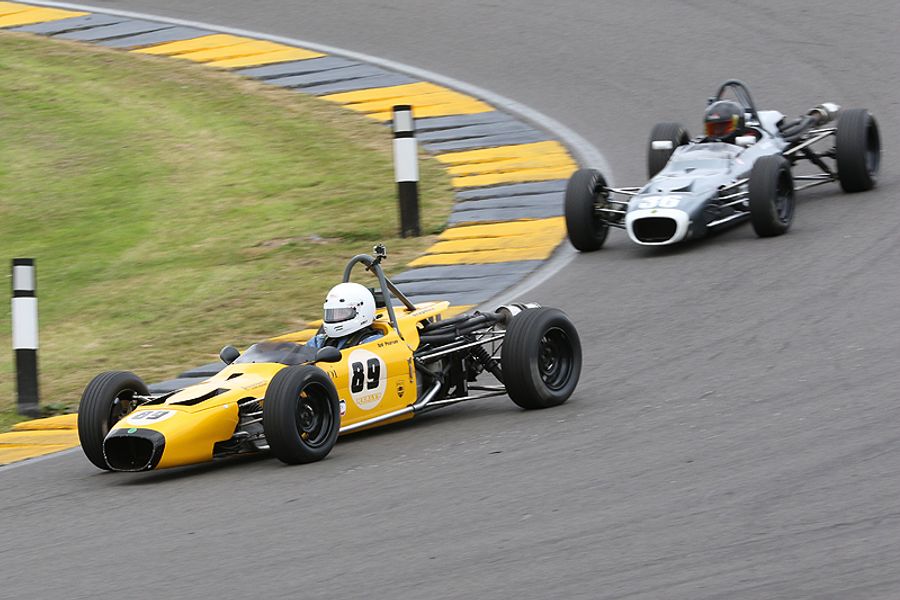 The Over 50s title within the HSCC Historic Formula Ford 1600 Championship will finally be settled at the Silverstone Finals Meeting (19th/20th October). The hotly-contested division for the older drivers in the championship will go down to the wire in two races when Rob Smith and Ted Pearson will resolve their season-long contest.

Sitting at the top of the points heading to Silverstone is Smith, who has enjoyed a fine season to date in his Wainwright-run Merlyn Mk20. Smith has been a model of pace and consistency and is the only driver to have scored points in all 17 races to date. Smith has won seven times including double victories at Silverstone, Cadwell Park and Croft and added a further six podiums to his tally.

The big rival to Smith is Pearson in his Merlyn Mk11/17 from the Grant team. Two non-finishes, at Snetterton and Cadwell Park, are countered by three wins and eight second places and Pearson’s points’ tally is currently 299 to Smith’s 333. However, it’s not that simple as drivers discard their four worst scores for the end of season total and while Smith currently has to drop 22, Pearson has zero to drop at this point. That changes the totals to Smith on 311 and Pearson still on 299.

If both drivers score well at Silverstone, Smith has two 14s to drop while Pearson has two 16s, so Smith effectively has another four points in hand. What is certain is that it is too close to call and the contest between these evenly-matched drivers is likely to run all the way to the end of the final race of the season.

Tremendous support and superb competition have been the key elements of the Over 50s section of this year’s HSCC Historic Formula Ford Championship. In the 17 races run across nine race meetings to date, a remarkable total of 40 drivers have scored points in the Over 50s from a grand total of 66 in the championship. Regularly, Over 50s racers account for more than half of the grid.

Of course, it is going to be far from a two-horse race at Silverstone and a gaggle of other rapid drivers will be chasing category victory rather than thinking about points. Brian Morris (Lola T200) has taken 10 podiums and is assured of third in the championship, while fourth place is the subject of a three-way battle between the Merlyn Mk20s of Kevin Stanzl, Tim Brise and Clive Richards.

Brise has missed a couple of the long haul races while Richards has only contested three weekends to date. He was unbeaten over his first four races before a spin at Brands last time out cost him his perfect score. Richards, running alongside Morris in the Neil Fowler team, is the driver most likely to head Smith and Pearson at Silverstone.