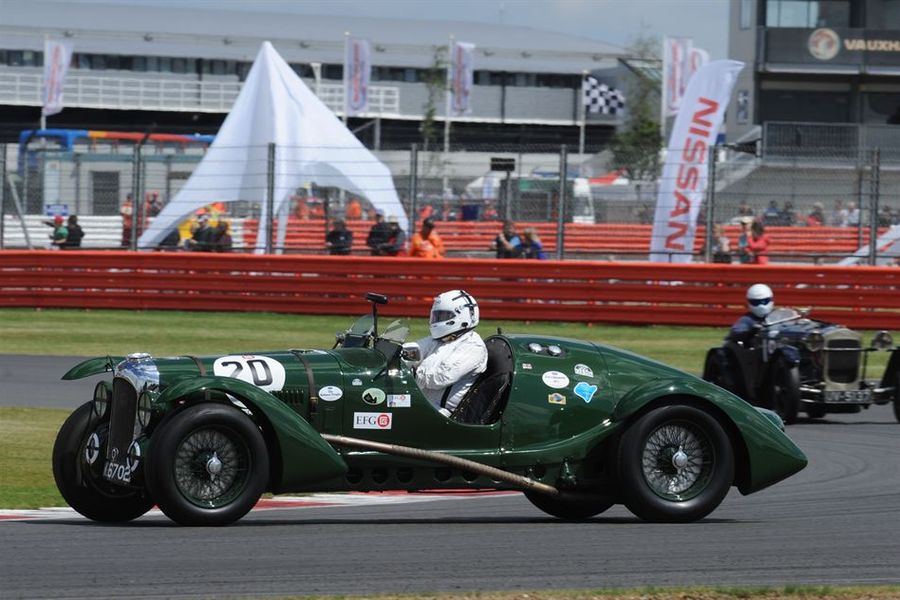 Next summer’s Silverstone Classic will feature more than eight decades of glittering motor sport history, with confirmation that the acclaimed Kidston Trophy for Pre-War Sports Cars is returning to the packed on-track programme in 2017.
The inaugural Kidston Trophy was a real crowd-pleaser when introduced for the event’s special Silver Jubilee celebrations in 2015. A captivating grid of more than 50-entries dating right back to the dawn of circuit racing took to the world-famous Silverstone Grand Prix Circuit for a dazzling 40-minute showdown, complete with a mandatory pit-stop and optional driver change. It was an enthralling spectacle featuring legendary marques such as Alvis, Aston Martin, Bentley, Bugatti, Frazer Nash, Invicta and Lagonda that – by popular demand – will be repeated on Saturday morning at the 2017 Classic.
Though victory went to the Frazer Nash Super Sports shared by experienced racers Fred Wakeman and Pat Blakeney-Edwards, it was the sight of a dozen iconic Bentleys that really caught the imagination of the 100,000 festival-goers – rightly so, as the Kidston Trophy was named in honour of one of the famed ‘Bentley Boys’ of the late 1920s.
Glen Kidston was a real life Boy’s Own hero. Back in 1914, he survived being torpedoed twice in the same morning when serving as a Lieutenant Commander in the Royal Navy. By the mid-1920s, he was a submarine Commander himself and when not at sea he set records as an aviator, hill climbed, conducted motorcycle speed trials on sand and raced cars, winning the 1930 Le Mans 24 Hours in the Bentley Speed Six he shared with Woolf Barnato.
Having survived several serious scrapes, Kidston sadly lost his life less than a year later when the de Havilland Puss Moth he was flying broke up in mid-air during a dust storm over the Drakensberg Mountains in southern Africa.
It took quite a grid to represent such a buccaneering character, but Motor Racing Legends succeeded in 2015 and its chairman, Duncan Wiltshire, is predicting another amazing turnout in July.
“We were completely blown away by the fabulous entry last time,” admitted Wiltshire. “The amazing quality and quantity of these wonderfully evocative cars proved incredibly popular both when on display in the paddock and when racing out on the track. They may not lap quite as fast as some of the slightly more modern machines from later epochs competing at the Silverstone Classic, but they are certainly every bit as spectacular.”
“It’s hard to beat the magnificent sight of so many intrepid drivers sawing away at their wooden steering wheels, fighting for grip on such narrow tyres,” agreed Nick Wigley, CEO of Silverstone Classic organiser Goose Live Events. “It’s not something fans of modern motor sport ever experience and is one of the many marvellous reasons that historic motor racing today is becoming more and more popular with those of all ages. We’re delighted to have these epic Pre-War Sports Cars back on the bill – they really do add yet another incredible dimension to what is always a fantastic show.”
Pre-war Kidston Trophy Silvertsone Classic