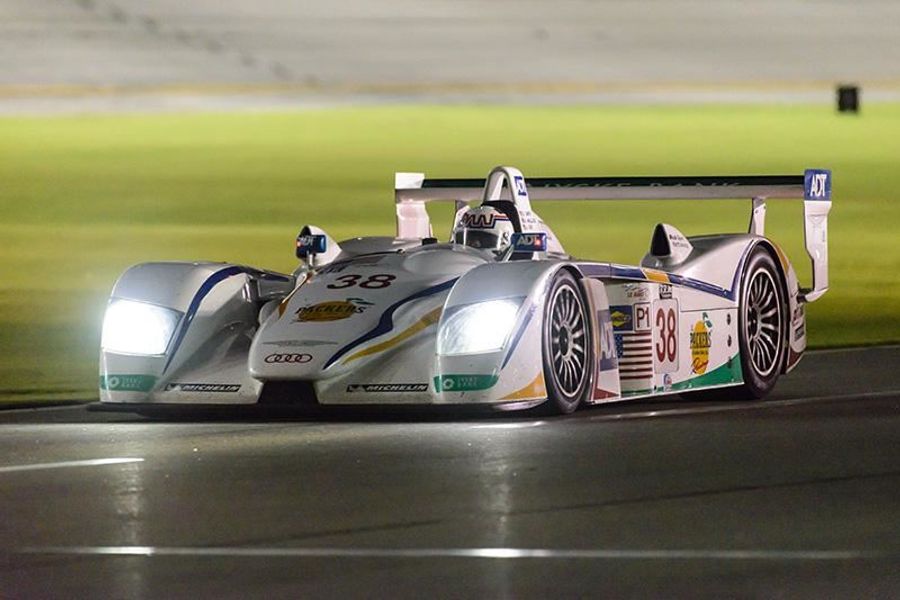 Fan-favorites and former winners of the Historic Sportscar Racing (HSR) Classic Daytona presented by IMSA are among the latest and legendary entries for the fourth running HSR Classic 24-Hour race that returns to Daytona International Speedway (DIS), November 7 - 11.

Recently filed entries include two-time Group E Classic Daytona winners Rogers Motorsports who will be looking for win number three in the Classic 24-Hour race in their fan-favorite 2005 No. 38 Audi R8 LMP. Doug Smith co-drove the No. 38, which carries the livery of the famous Champion Racing Audis campaigned by the late Dave Miraj, to victory in the first two runnings of the Classic Daytona. Smith co-drove to the repeat victory with Butch Leitzinger in 2015 after winning in the inaugural Classic Daytona in 2014 with Andy Wallace, who returns to the No. 38 this year.

Rogers Motorsports is also bringing its ex-Group 44 1985 No. 44 Jaguar XJR-7 back to the Classic Daytona for the second-straight year. Smith is entered in the Jaguar alongside returning team driver James Gue in Group C. The Rogers team is looking for a return to victory lane with the Audi and a first Classic Daytona win with the Jaguar after in-race issues hampered both entries in 2017's Classic 24-Hour race.

"We are excited to go back," Smith said. "We are going with two cars in two different classes, both the Audi and XJR-7 Jaguar, crowd favorites, and we are trying everything in our power to make sure we don't have any repeats of the problems we had last year. Sounds like Andy Wallace, James Gue and I are going to be the three in the two cars, and we will see if we get lucky."

The Classic Daytona is a tribute race to the 24 Hours of Daytona, known in recent decades as the Rolex 24 At Daytona, which has been held on the DIS road course for more than 50 years. Wallace is a three-time overall 24 Hours of Daytona winner, Gue co-drove to the Prototype Challenge (PC) win in 2014 and Smith has also competed in the Rolex 24.

"Winning the Classic 24 means something, and you do get a nice B.R.M. watch for the privilege," Smith said. "I have done the main 24-hour race at Daytona once and that was a little bit different pressure situation. What's different is that in the Classic you are driving a literal piece of history and you are around other pieces of history. From that standpoint, the Classic, for me personally, is even a little more special. You get to drive cars you grew up idolizing or wanting to drive as a young child, and the Classic 24 Hour gives you a chance to actually do that."

In the case of the Audi R8 LMP, the Classic Daytona has been an opportunity for this world-beating car to run in a true Daytona endurance race for the first time after never having the chance in its competition prime. It's a treat for drivers lucky enough to take the wheel and race fans that finally get a chance to see an Audi LMP wide open on the DIS high banks.

"The Classic 24 Hour is a great event," Smith said. "I never got to drive LMP or GTP cars in their prime, of course, but it is a very visceral experience. The open-air Audi is amazing because you are focused ahead, even though you could probably look up and see the heavens above, and the air conditioning works very well! The Jaguar is a different kind of experience because you have the closed cockpit and the headlights aren't quite as good. Both cars are an amazing experience."

Another returning entry incredibly popular with Classic Daytona race fans is the ex Kremer Racing 1980 No. 52 Porsche "Jägermeister" 935 K3 from Mike Smith and his Smith Motorworks team. Smith and his team have come close to a Classic Daytona class victory in the past and are hoping 2018 is the magic year for their flame-throwing turbocharged Porsche.

Recently retired IMSA Prototypes are popular race cars of choice competitors in the Classic Daytona and other races on the full-season HSR schedule. This includes Daytona Prototypes and Oreca FLM09 PC cars, similar to what Gue co-drove to victory in 2014.

One such PC car entered for the 2018 Classic Daytona is the 2011 No. 54 Roin Realty Holdings Oreca FLM09 entered for Dominick Incantalupo and professional sports car driver Sean Rayhall, who competes in both IMSA and European sports car racing series.

Another former Classic Daytona winner returning this November is the big-bore 1992 No. 5 Oldsmobile Aurora GTS of Steve Cohen and Ray Snowdon from Sundry Racing. The co-drivers won their class and finished an impressive sixth overall last year in the Aurora to earn a B.R.M. Chronographes watch as the highest placing GT car in Group D.