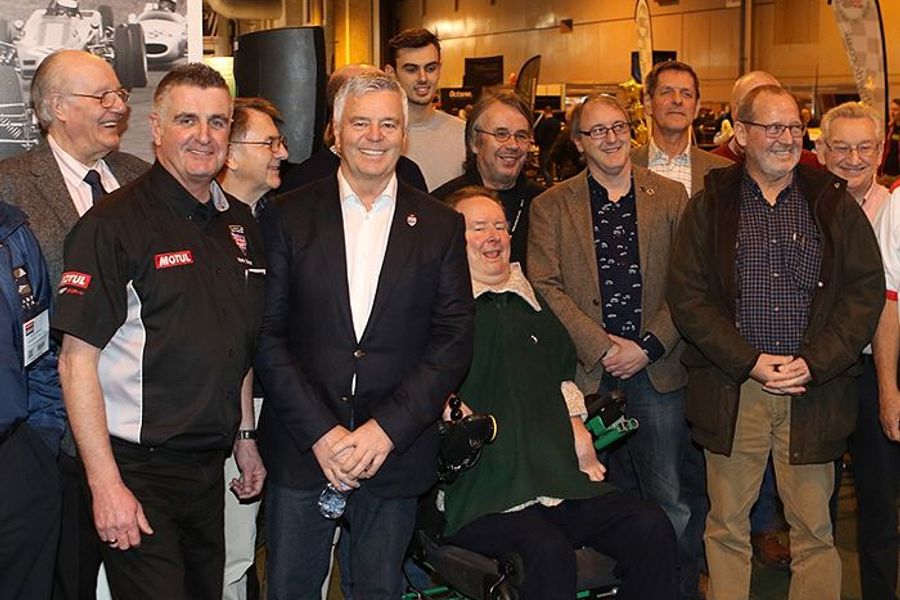 Drivers from 50-years of Formula Ford, headed by Derek Warwick and Nick Tandy, provided the perfect start to the Historic Sports Car Club’s Formula Ford 50th anniversary season during a star-studded gathering at Autosport International (12th to the 15th of January).
Warwick and Tandy were present on Friday (13th January) at the HSCC stand with a backdrop of eight Formula Fords from across 50-years, including cars raced by World Champions Michael Schumacher, Emerson Fittipaldi and Jody Scheckter.
F1 racer Warwick and Le Mans winner Tandy were joined by many Formula Ford racers including Martin Donnelly, John Village, Jim Walsh, Rick Morris, Bernard Dolan, Ed Moore, Roger Pedrick, Peter Wardle, Stuart Kestenbaum, Grahame Tilley, Chris Alford, Stuart Baird, Scott Stringfellow and Barry Pomfret. With Ian Titchmarsh and Marcus Pye hosting an open forum, there were many tales from the golden years of Formula Ford racing.
Warwick, a leading contender in 1976 and winner of the European championship, remembered just how good Formula Ford was in period. “In 1976, I raced in 63 races and won 32,” he said. “We ran it very cheaply and we were just amateurs at that stage. The racing was phenomenal.”
Le Mans winner Nick Tandy said that the category had been a pivotal part of his career. “I loved my time in Formula Ford and I’m really proud that I’m part of the Formula Ford history. It was a great time in my career,” he said.
Triple champion Jim Walsh shared memories of some epic races in the 1970s, particularly at Silverstone. “I used to love the car control of those Formula Fords and we had some great races. I met a lot of good friends like John Village and Rick Morris and we had some great times.”
Marking the beginning of the category in July 1967 was Ray Allen, winner of the very first Formula Ford race which was held at Brands Hatch, while manufacturers were represented by Alan Cornock (Royale) and Howden Ganley (Tiga). F1 designer Pat Symonds, who spent his early career creating winning cars for Royale in the 1970s and 1980s, was another star guest.
“This was the perfect start to our year of Formula Ford 50th anniversary celebrations,” said Grahame White of the HSCC. “We are very grateful to everyone who gave their time to join us and it was particularly good to welcome BRDC President Derek Warwick, 2015 Le Mans winner Nick Tandy and former Grand Prix racer Martin Donnelly.”
HSCC Formula Ford Autosport International FF1600