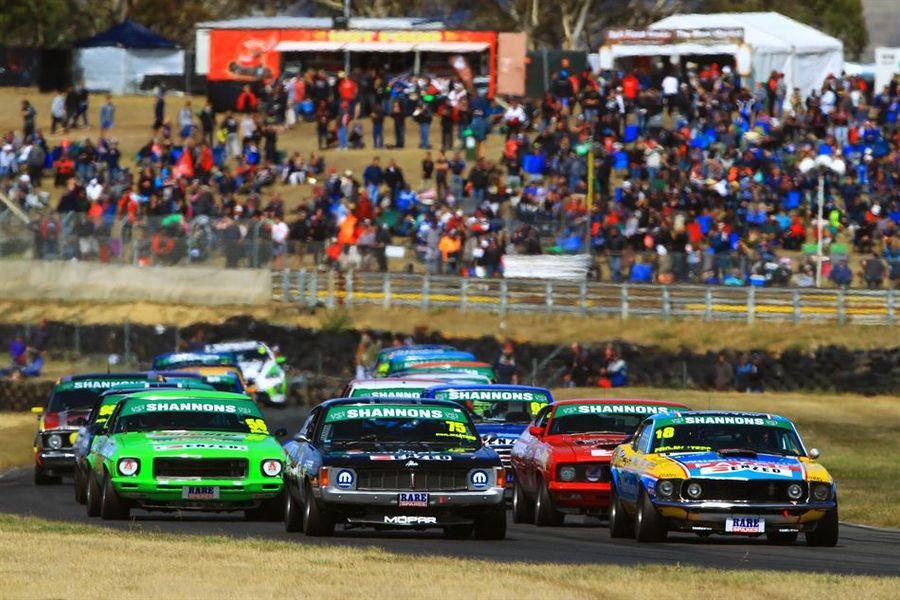 Steven Johnson claimed his third victory from as many races in the ENZED Touring Car Masters this afternoon after another faultless lights-to-flag display. With no points on offer for the final race of the weekend later this afternoon, Johnson also collected the ProMaster class victory for the Shannons Tasmania Tourist Trophy, whilst Cameron Tilley and Tony Hunter led the way in the ProAm and ProSport classes respectively. Tilley was awarded the Rare Spares Achievement award thanks to his continued efforts in the Valliant Pacer, while Gavin Bullas’ shiny new Mustang won the Meguiar’s / Liqui-Moly ‘Looks Good, Goes Great’ award for obvious reasons.

The Dunlop Super Dealers entry once again hit turn one first on the opening lap, however ‘Mustang Sally’ was far from unchallenged as Greg Crick fought tooth and nail to put his Chrysler Charger in front. Crick reduced the margin to within one second during the closing stages; however the Tasmanian was narrowly denied a popular victory in front of his home fans by just three tenths of a second.

Cameron Tilley continued to impress in his head-turning Valiant Pacer – the New South Welshman seeing the chequered flag in third place to record his best result of the weekend. After a difficult start to the round, Jim Richards hauled his AMC Javelin into contention during race three and was scored a close fourth behind Tilley.

Bill Pye continued to dice with the frontrunners in his Chevrolet Camaro, rounding out the top-five for a net gain of four positions over 12 laps. Paul Freestone put in an impressive drive in race three – improving to sixth position having placed 12th in race two yesterday. Andrew Fisher rewarded his Jesus Racing crew with his second consecutive top-ten finish – coming home seventh in the thundering Falcon XY GTHO.

Glenn Seton held his confidence despite a couple of spins yesterday to complete the race as the runner-up Ford Mustang in eighth. Symmons Plains-specialist, Gavin Bullas, rebounded strongly in his Ford Boss Mustang after retiring with a mechanical issue in race two, working his way into ninth ahead of Mark King.

The race featured plenty of action at turn four, with Jason Gomersall and Wayne Mercer both finding trouble at the hairpin in separate incidents on the fiurth lap. After charging through the field in his Whiteline Transport Racing machine, Andrew Miedecke couldn’t wipe off enough speed to negotiate the hairpin at the midpoint of the 12-lapper and was forced to let the entire field pass before re-joining the circuit. He finished on the lead lap in 19th place.

Tony Karanfilovski had a major scare at the beginning of the formation lap; however the TIFS Warehousing and Distribution driver eventually got his Mustang rolling and finished just outside the top-ten. Eddie Abelnica was in contention for his third top-three finish of the weekend; however the Victorian fell back to 14th place after an eventful 12 laps.

The hard-luck story of the race was Brett Youlden – who experienced a considerable mechanical issue with the left front of his HQ Monaro Coupe and retired from the race on lap 2.

The ENZED Touring Car Masters will return to the Symmons Plains circuit for a non-points exhibition race later this afternoon. After two rounds, Tony Hunter leads Leo Tobin and Tony Hunter in Pro Sports, Cameron Tilley heads Brett Youlden and Ian Palmer in ProAm while Eddie Abelnica has assumed the lead in the ProMaster class over the consistent Greg Crick and Jim Richards.

The next round of the ENZED Touring Car Masters series will be held at Winton Motor Raceway on May 15th to the 17th.