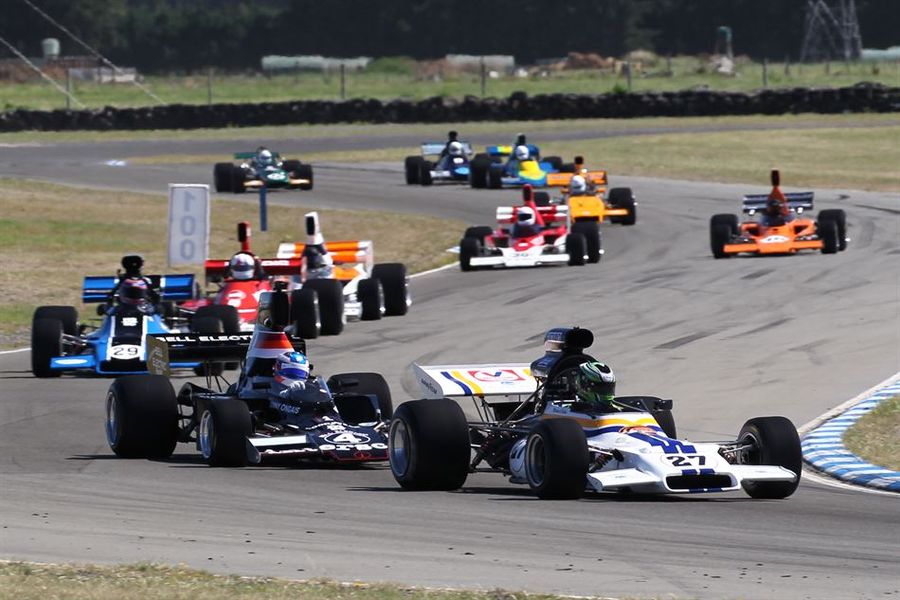 He came, he saw, and as far as the three SAS Autoparts MSC NZ F5000 Tasman Cup  Revival Series races at the Christchurch’s annual Skope Classic motor racing meeting over the weekend were concerned, category young gun Michael Collins (McRae GM1) conquered.
With class patriarch Ken Smith (Lola T332) sidelined by a broken engine valve after qualifying quickest and leading the first race, Collins stepped into the breach, going on to win that race and the two on Sunday.
A determined former series champion, Steve Ross (McRae GM1), proved he has lost none of his skill after sitting out the past season and-a-half, leading the longer 12 lap feature race for the first eight laps, but the pace he had to run to stay in front of Collins eventually told, Ross pitting exhausted with four laps to run.
As Ross slowed, both Collins and eventual race and weekend runner-up Andy Higgins (Lola T332) closed the gap. But with clear air in front of him Collins eased away again, crossing the finish line almost three seconds in front (the gap was 2.986s).
In doing so he was the only driver to break the 1.20. 00 barrier in the race, claiming his third fastest lap of the weekend with a 1.19.788.
“Not a bad way to end the weekend at my home circuit in front of my family, Alistair (Hey) who owns the car, and all the sponsors,” said Collins.
As they did in both earlier races Andy Higgins (Lola T332) and Aaron Burson (McRae GM1), both from Auckland,  followed Collins home in second and third places respectively.
Happy to finish as high as fourth place, meanwhile was Grant Martin in his Talon MR1A. Defending series title holder Brett Willis (Lola T330) did manage to pass Martin for the place mid-race, but no sooner had he made the move he was slowed by a gear selection problem and pulled out with just two laps to go.
David Banks (Lola T332) also ran strongly early on, between  Aaron Burson in fourth and Martin in fifth, only to have a half spin when he caught a ripple strip and as he was gathering things up again Martin, David Arrowsmith and Ian Clements (Lola T332) drove past.
Arrowsmith was back to his giant-killing best in the feature race after loaning his unique Ford-engined Lotus 70 to UK-based series regular Greg Thornton for the race on Saturday, only to pull out of the race on Sunday morning worried about a vibration at the front of the car.
Fortnately the vibration was traced to wear from the track on the underside of his car’s nosecone and with that sorted Arrowsmith was again the first Class A (for older cars) class entrant home in fifth place in the final 12-lap feature race.
For his efforts in supporting the SAS Autoparts MSC series on and off the track the Christchurch man was also chosen as the recipient of the Stan Redmond Memorial Trophy, an honour he said which he was humbled to have bestowed on him.
“I knew Stan well and knew how much work he did behind the scenes, both for the category and a lot of the young drivers coming through. He was someone who I respected so it is a huge honour to receive an award in his name.”
The second SAS Autoparts MSC NZ F5000 race of the Skope weekend (on Sunday morning) was won - like the first and final - by Michael Collins with Andrew Higgins and Aaron Burson again second and third respectively. This time Steve Ross made it up to fourth after starting from the back row of the grid. Glenn Richards was able to fix his Lola T400 after damage done to it in the first race but he finished back in 10th place and decided to sit out the final race.
In the first race of the weekend on Sairday afternoon, fastest qualifier Ken Smith led from the rolling start and again after an early Safety Car period caused by a multi-car collision as the 13-strong field thundered into the first corner. But just when it looked like the 75-year-old category super veteran was going to stroke home for another win he slowed and headed for the pits.
“It just started making a tappet-y sort of noise from the engine,” he said after the race. “It’s just a new one so it was better to stop and give it a check over rather than keep going and risk doing more damage to it.”
Smith confirmed on Sunday that the noise had been caused by the head of a valve breaking of, the decision to shut down the engine and retire from the Saturday race the right one.
2017/18 SAS Autoparts MSC NZ F5000 Tasman Cup Revival Series
Race 2 (Sun)
1. Michael Collins 10:45.966
2. Andy Higgins +2.108
3. Aaron Burson +9.799
4. Steve Ross +14.716
5. Grant Martin +20.852
6. David Banks +21.723
7. Ian Clements +23.760
8. Brett Willis  +24.214
9. Tim Rush +43.965
10. Glenn Richards +54.239
11. Frank Karl +1 lap
DNF. David Arrowsmith
R3 SAS Autoparts MSC F5000 Feature- 12 Laps Sun
1. Michael Collins 16:10.724
2. Andy Higgins  +2.986
3. Aaron Burson +18.589
4. Grant Martin +31.991
5. David Arrowsmith +32.560
6. Ian Clements +37.894
7. David Banks +46.576
8. Tim Rush +58.920
9. Frank Karl +1 lap
DNF. Brett Willis, Steve Ross
DNS Glenn Richards