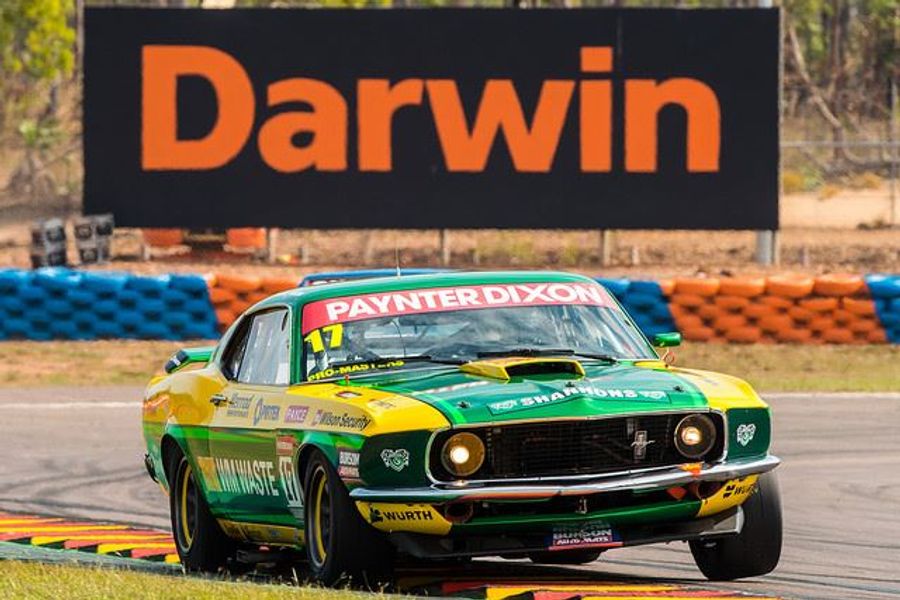 The five-point margin that existed between John Bowe and Steve Johnson at the top of the Paynter Dixon Touring Car Masters standings now stands at zero. Pole position for Johnson in the Shannons Thunder in the Valley ensured the pair will be locked together heading into tomorrow’s Dometic Trophy race – and assuming they both finish that, race ten of the championship in the afternoon.

The WM Waste Ford Mustang driver topped practice earlier on a hot Friday at Hidden Valley and then banked a 1m12.88s flyer on his sixth of seven laps in qualifying to comfortably record his third pole of the year, and ninth in his TCM career.  With it came five bonus championship points and a deadlock with Bowe – who qualified second – heading into the racing tomorrow and Sunday.

It was Johnson’s second straight pole position at Darwin and the first important step in a potential third-straight round win this year. Keeping his rivals optimistic will be the fact that no driver has ever won four consecutive rounds at the same venue in TCM history; Johnson having won the last three times out in Darwin.

Of those rivals, John Bowe needed the full length of the session to reach the front row, an early-session red flag leaving Bowe stranded in 14th position after the first third of the session. Once qualifying resumed he needed each of his ten laps to get himself to the front row, his 1m13.34s best edging out fellow Torana driver Jason Gomersall for the spot on the front row.

It was the eleventh time that Johnson and Bowe have locked out the front row in the Touring Car Masters series, second only to Bowe and Jim Richards in front-row lockouts. Johnson’s six poles to Bowe’s five ensures the Ford driver has the edge on the Holden.

Gomersall was third in both practice and qualifying, the BigMate Racing Torana edging out Andrew Fisher on the second row of the grid. Fisher’s impressive performance represented his best qualifying performance of the season in the Jesus Racing Falcon.

Jim Richards was fifth in the Shannons Insurance Falcon Sprint on his return to TCM, while Mark King was an excellent sixth – despite being the cause for the earlier red flag in qualifying when his car spun at turn six and was unable to be restarted. The Whiteline Racing Camaro driver sat out most of practice with a flat battery and needed to be bump-started when his car stopped in qualifying as well.

King’s teammate Adam Bressington followed in seventh, like Bowe needing ten laps before he could set a representative lap time that got him towards the pointy-end of the field. Bruce Williams (AC Delco Torana), Tony Karanfilovski (TIFS Mustang) and Cameron Tilley completed the top-10.

Darwin’s challenging conditions struck early with several competitors facing early issues – some more serious than others. Cameron Mason was unable to bank a representative lap in practice, and then missed qualifying, when his car snapped an axle early in the day. His team have sourced a replacement and will utilise a local machine shop to ensure it fits for race one tomorrow.

The dramas were more serious for the Multispares Torana of Ryan Hansford, his car breaking a camshaft before Practice one even commenced, putting the Queenslander out of the event. The broken engine represents a major blow for Hansford, who sits fourth overall in the championship and second in the ProAm class.

Saturday’s action commences with the Dometic TCM Trophy Race at 11:50am, with the top half of the grid to be reversed and sent to the back for the traditional ‘jumbled grid’ affair. Race 10 of the championship proper then commences at 2:35pm on Saturday afternoon, with Races 11 and 12 to complete the program on Sunday afternoon.