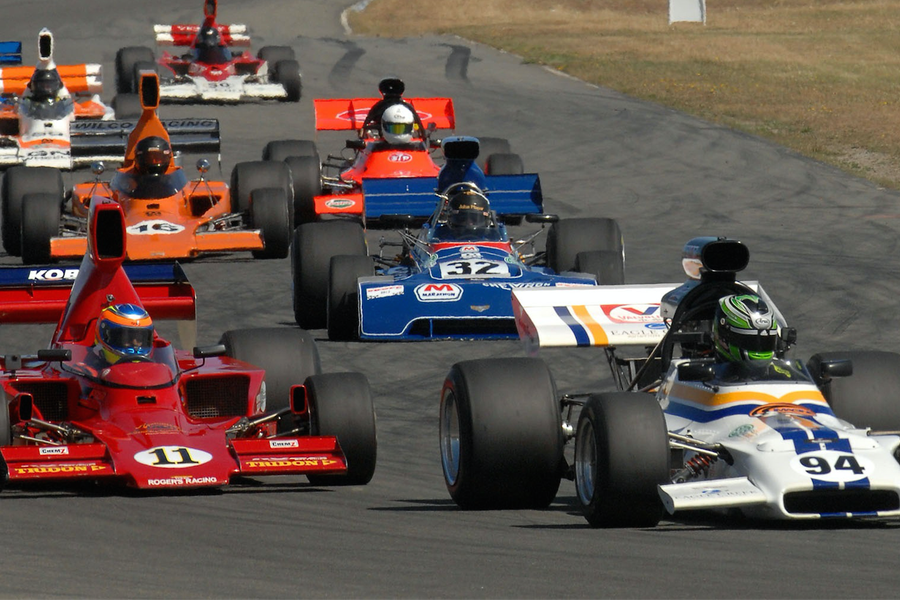 They say that the first win is the hardest and that after it subsequent ones come more easily. That would certainly appear the case for SAS Autoparts MSC NZ F5000 Tasman Cup Revival Series driver Michael Collins (McRae GM1).

The 22-year-old from Christchurch claimed his first pole position at the third round of the 2018/19 series at Hampton Down last weekend, but ended up again playing second fiddle in each race to the four-time category champion and early season pace-setter Ken Smith (Lola T332).

This weekend though, on his home track, Mike Pero Motorsport Park, Ruapuna, Collins not only pipped Smith for pole position for a second time in as many meetings, he also managed to convert his qualifying pace into his first category race win on Saturday then second and third wins in the 8 and 12 lap races on Sunday.

In each race Collins and Smith were in a class of their own, sprinting away from the rest of the field and circulating within metres of each other from the rolling starts until the chequered flags came out.

In typically modest fashion there was no punching the air when Collins finally claimed his first category race win – or the subsequent ones – though. Even when he got back to his pit and climbed out of his car there was little fanfare.

“Not my style,” the former kart and Formula Ford driver explained afterwards, going on to say that his main emotion on finally getting that all important breakthrough class win was relief more than anything else.

For his part Ken Smith was sanguine, saying that if he had to beaten by someone he was happy that it was Collins.

“I’ve got no problem coming second to a young bloke like Michael,” he said. “There were places where I could catch him but others where his car was better than mine but like at Hampton Downs last weekend it really depended who got the jump at the start. If I had been able to get in front, I don’t think he would have been able to get past me.”

UK-based series regular Greg Thornton (Chevron B24) was again the best of the rest of the SAS Autoparts MSC Series runners in the first race of the weekend on Saturday but ended up back in 7th place in the second race after struggling with what he felt was a diff issue.

“It was something in the rear end, anyway,’ he said. ‘It was fine under brakes and into a turn, but the minute I got on the throttle it wanted to swap ends.”

With LeRoy Stevenson back up to speed and Thornton running off the track then spinning twice, Brett Willis led the mid-field battle pack home in the second race, with David Banks fifth, Aaron Burson sixth, Thornton recovering to finish seventh and Kevin Ingram claiming the final finishing spot after losing two places when  he spun with two laps to go.

In the 12-lap feature final, Stevenson initially got the jump on Smith and held second for two heady laps before Smith was able to find a way past and set off after Collins again.

Stevenson remained in third place  – despite a spin of his own – with Greg Thornton back to his and his Chevron’s best in fourth ahead of David Banks and Aaron Burson.

Early on Brett Willis was running comfortably in fourth but ended up a dnf with not one but two broken half (drive) shafts. Kevin Ingram also ended up a dnf when he couldn’t get his Lola T332 restarted after a spin.

A heavy crash in qualifying for Hampton Down-based category regular Tony Galbraith (Lola T332) saw him spend the rest of the weekend in Christchurch Hospital with breaks to his left leg and a dislocated kneecap.

After the final race on Sunday, meanwhile, series regular (and the man behind SAS Autoparts) David Banks was presented with the Stan Redmond Memorial Trophy. The trophy is awarded annually at the Christchurch round of the SAS Autoparts MSC NZ F5000 Tasman Cup Revival Series to the driver who best exhibits the characteristics of fraternity and good sportsmanship the late Stan Redmond, one of the first local drivers to champion the revival of the Formula 5000 category, held dear.