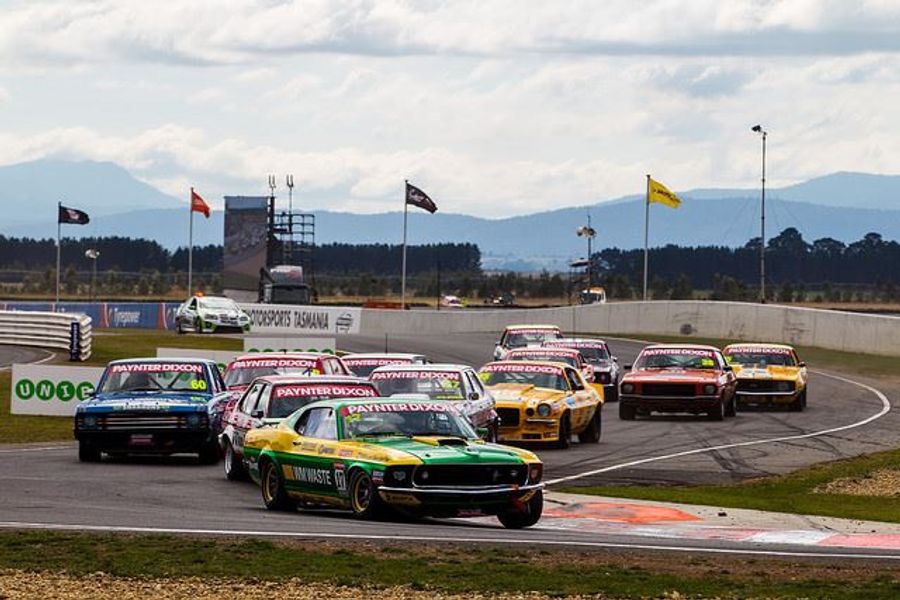 Three wins from three starts have delivered Steve Johnson the second round of the 2018 Paynter Dixon Touring Car Masters series. In the first clean-sweep by any driver of a three-race weekend since 2015, Johnson backed up his victory in race four of the season yesterday with two further starring performances today at Symmons Plains.

In tricky conditions he pulled away from Ryan Hansford and John Bowe – who were battling for second – in the Sunday morning race while the afternoon’s finale’ was a more emphatic performance as he led home Bowe and Adam Bressington. The finale’ was maximum-attack racing from both Johnson as Bowe as they ran close to the lap record across the 15-lap duration.

After such a frustrating end to his Adelaide weekend, Johnson said he was pleased to bounce back to emphatically in Tasmania after three hard and fast races.

“That is as hard as I have driven the car – it was on the limit,” Johnson said. “The car was as good as it was going to be so we pushed hard. JB pushed me hard and neither of us were holding back.

“We needed a result like this here because this was always going to be a track that suited the Mustang, so it’s a great result. It’s good for the team to bounce back this way after the way we ended in Adelaide.”

Johnson climbed from fourth to second in the TCM standings following his successful weekend and now sits just 44 behind Bowe heading into the next round, at Winton. Bowe’s pole position and trio of second-placed race results saw him score the same overall result for the weekend.

Cameron Tilley’s consistent weekend saw him not only take the ProAm class honours, but also score enough points to finish third overall for the weekend. The Valliant Pacer driver continues to hold down third outright in the championship – as well as the class lead.

Jim Pollicina scored his first round victory in the ProSports class in the MoComm Communications Torana.

Though Johnson was out in front of both, Sunday’s pair of races were competitive affairs. 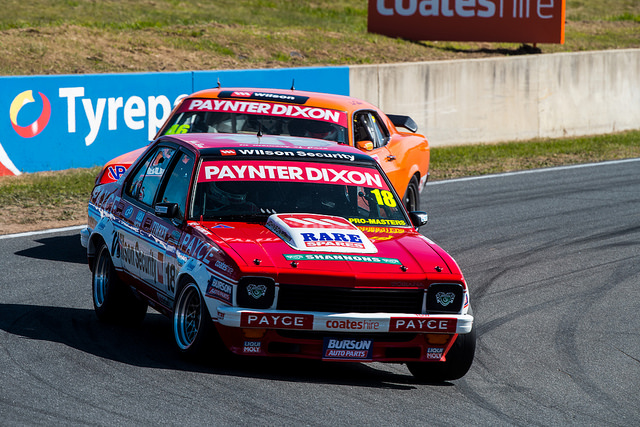 In race five Bowe and Hansford spent much of the race battling for second place, including several laps featuring highly competitive wheel to wheel action. Hansford ultimately got the better of his Torana-driving rival as he continued a strong weekend.

Cameron Tilley finished fourth and Jim Pollicina fifth, while Adam Bressington ran strongly but failed to finish after spearing into the gravel trap at turn four late in the race, thanks to the greasy conditions.

Race six of the championship saw Johnson and Bowe power away from the field, while Bressington was the star as he charged the VDC-supported Camaro through from the back of the grid to third place. Pollicina impressed again by finishing fourth with Cameron Tilley fifth and Mark King a pleased sixth after rebounding from an overnight engine change in the King Springs Camaro.

After starring earlier, Hansford limped home to eleventh place after his car dropped on to seven cylinders on the formation lap.

A notable story of the day was that of Brett Youlden, who deputised for an ill Paul Freestone in today’s two races. Having only briefly driven the car during testing at Winton, Youlden started last in Sunday’s first race and quickly worked his way through the field to seventh. He dropped one spot back in the finale’ following a trip across the grass at turn one and two mid-race.

The Paynter Dixon Touring Car Masters will regroup following their Tasmanian trip for the third round of the championship, to be held on May 18th-20th at Winton Raceway in Victoria.

Early indicators point to a bumper grid nearing 30-cars for the third round of the 2018 series.