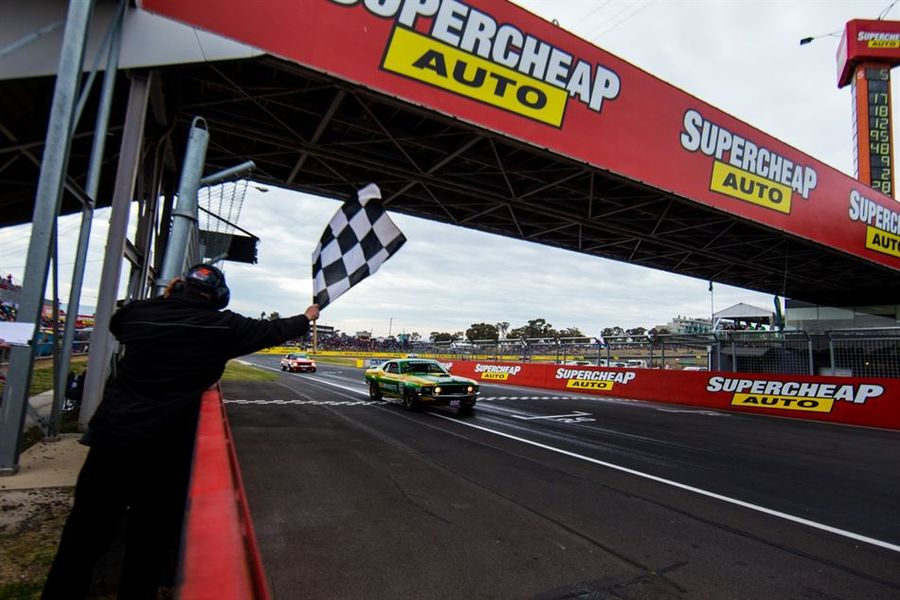 Just five points separate John Bowe and Steven Johnson in the battle for the Touring Car Masters series, after Johnson slammed home an emphatic round victory at Mount Panorama this weekend. Backing up his win in race two on Saturday, Johnson led from lights to flag to win the third race of the weekend in front of a packed house on a Bathurst Sunday morning.
The victory for car 17 perfectly came after Scott McLaughlin powered the ‘sister’ car from DJR Team Penske to pole for the Supercheap Auto Bathurst 1000 in Saturday’s Top-10 shootout.
Starting from pole, Johnson’s start wasn’t perfect – allowing Bowe to run alongside through turn one and up Mountain Straight. Johnson asserted his lead into two, with Bowe and Bressington slotting in behind – though the battle continued through the opening lap.
Bowe attempted an outside move on Johnson at the Chase, allowing Bressington through when he ran wide after the attempted move at the left hander. Bressington held second for the next several laps, before Bowe was able to slip through under brakes at the final corner and re-take second position.
Bowe chased Johnson hard, and re-set his own Bathurst lap record to 2m17.4462s to get to within 0.5 seconds of his old rival by the time the flag fell after six laps. Adam Garwood was the next to move up the order, passing Bressington within the final two laps to grab third place – his best TCM race finish in a non-jumbled grid affair.
Eddie Abelnica finished fifth, taking advantage of a late race spin by Ryan Hansford at the Elbow to climb into the top five. Andrew Fisher and Jim Richards battled for a majority of the race, Fisher getting his XY GTHO Falcon home in front of the seven-time Bathurst champion.
Brad Tilley moved from outside the top-10 to eighth place in a solid return for the green GTHO, while Tony Karanfilovski and Hansford completed the top-10.
Perhaps the battle of the race came from outside the top-10, with an enormous five car scrap between Cameron Tilley, Bruce Williams, Wayne Mercer, Geoff Fane and Rusty French thrilling fans. Tilley ultimately scrapped through, while Williams’ charge from the back of the field was a strong return for the troubled AC Delco Torana after two horror races on Saturday. French ultimately failed to finish the race after withdrawing his Skye Sands Mustang to pit lane on the penultimate lap.
With one round to go at the Coates Hire Newcastle 500, the Touring Car Masters series will go down the wire – with Bowe looking for his sixth individual TCM title and Jonson his first in what will be a winner-takes-all finale for both the overall pointscore and the ProMasters title.
Adam Bressington remains firmly in title contention, sitting 25-points behind the outright lead while at the same time holding down the top spot in the ProAm title race. Ryan Hansford will be a mathematical chance at the title – 93-points from the lead – though may well focus on trying to beat Bressington for the ProAm title in Newcastle.
Adam Garwood has moved to fifth in the overall standings, in front of Eddie Abelnica, Jason Gomersall, Cameron Mason and Tony Karanfilovski. Darren Beale continues to lead the ProSports title heading into the final round in Newcastle.
Race Three:
1    Steve Johnson (Ford Falcon XY) 6 Laps in 13m48.7122s
2    John Bowe (Holden  Torana SL/R) 13m49.2784s
3    Adam Garwood (Holden  Torana A9X) 13m54.3325s
4    Adam Bressington (Chevrolet Camaro SS) 13m55.2295s
5    Eddie Abelnica (Ford Falcon XB Coupe) 13m55.2312s
6    Andrew Fisher (Ford Falcon XY GT HO) 14m07.2112s
7    Jim Richards (Ford Falcon Sprint) 14m07.3003s
8    Brad Tilley (Ford Falcon XY GT HO) 14m15.8872s
9    Tony Karanfilovski (Ford Mustang Trans Am) 14m17.7113s
10   Ryan Hansford (Holden  Torana SL/R) 14m17.8233s