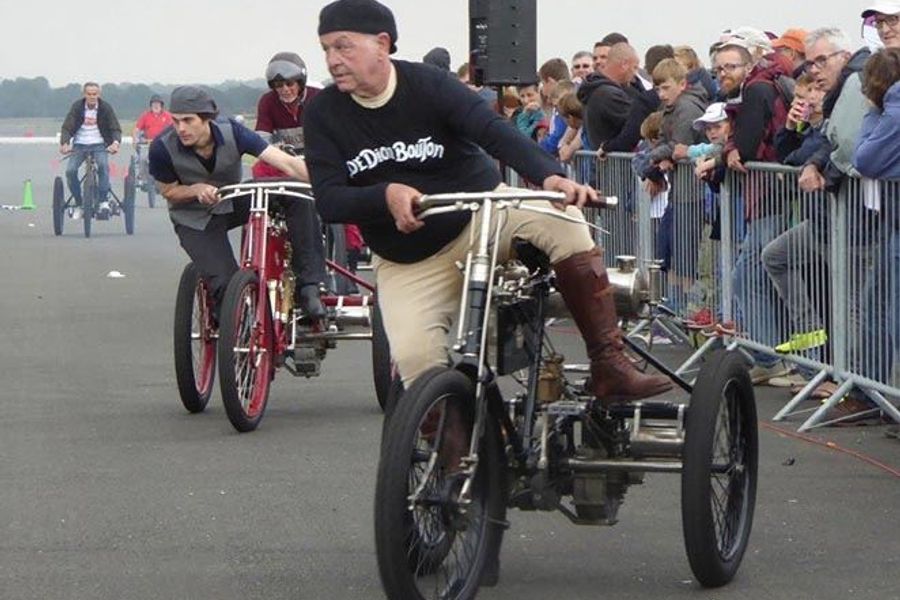 The 120th anniversary of the very first British motor races organised by the Motor Car Club is to be commemorated at Brooklands Museum on Wednesday 29th November as around fifteen historic De Dion Bouton motor tricyles take to a circuit laid out on the restored Finishing Straight of the world’s first purpose-built motor racing circuit in Weybridge, Surrey.
On that day in 1897, the Motor Car Club, as a first anniversary celebration of their Emancipation Run from London to Brighton, organised a series of races for De Dion Bouton motor tricycles on the quarter mile oval cycle track at Sheen House, Richmond Park. The demolition of Sheen House along with its cycle track many decades ago has seen the De Dion Bouton Club's Team Jarrott look to a historic venue to hold the commemoration and, following the re-opening of the Finishing Straight at Brooklands, they have found the perfect location.
The riders so far confirmed to participate include Robert Lusk on his 1898 Rochet, Peter Fryer on his Phebus from 1899 and a 1900 De Dion Bouton ridden by Caroline Sibley. The first race will be a one mile scratch race for which the winner will receive the Finishing Straight Cup. Next will be a one mile handicap race and lastly, the five Mile Race for the Championship of the De Dion Bouton Club UK.
Visitors are welcome to attend and watch this slice of motor racing history recreated. The format of the day will be as in 1897 - practice and fettling in the morning, lunch in the Napier Room in the Clubhouse, (with a short talk on how racing started in Britain), followed by the race programme. Come rain or shine, the pioneers will be celebrated in style and, like the participants themselves, the organisers expect some spectators will arrive in period attire. The timetable for the day is as follows:
10.00  Museum opens
11.00-12.00  Practice Runs
12.30 Talk followed by lunch in the Napier Room of the Clubhouse
14.00 Races, including the De Dion Bouton 5Mile Championship
15.30 Awards Ceremony
"We are delighted to be able to host Team Jarrott at Brooklands" said Allan Winn, Director and CEO of Brooklands Museum. "This unique event brings together the vehicles that ran in the country’s first-ever motor race in 1897 and the World’s first purpose-built motor-racing circuit, opened 10 years later in 1907. It will be the first time since the Brooklands Track closed in August 1939 that races have been held on the iconic Finishing Straight – only re-opened after restoration in June this year – and these races will also be the first to be recorded on the re-created Paddock Scoreboard, unveiled in August. It’s no wonder we’re expecting the 29th of November to be quite an occasion!”
Event Director and creator of Team Jarrott, Nick Pellett adds "Over the last seven years, we have been racing the De Dion Bouton trikes around the country: at Silverstone, Mallory Park, the "Top Gear" track at Dunsfold, and on a private track in Essex. On 29th November we hope to have around fifteen trikes on track in a series of races, from one mile sprints, to the finalé which will be the Club's Five Mile Championship Race. And, make no mistake about it, these will be actual races, hard fought, where winners will be declared and Trophies awarded. Furthermore, they will be presented exactly as those first motor races were, on an oval circuit. The Brooklands Finishing Straight is the perfect location to re-create history".
As well as the activities on the Finishing Straight, all of the Museum exhibition areas will be open – including the new Aircraft Factory and Flight Shed which showcases the 80 year aviation legacy at Brooklands – with catering available in the Sunbeam Café or in the Napier Room, upstairs in the Clubhouse.