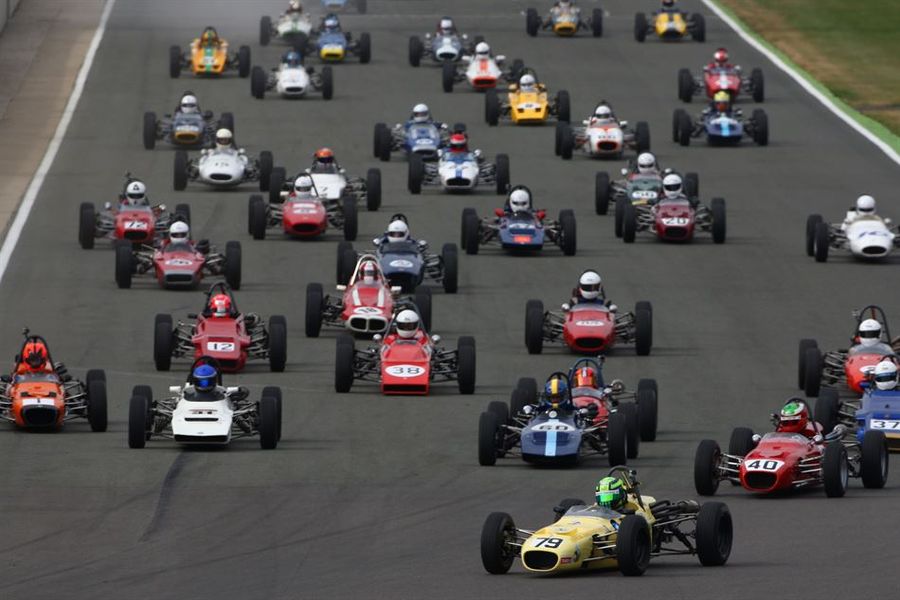 The world’s most famous proving ground for future champions, Formula Ford, turns 50 in 2017 – a golden milestone that will be celebrated in style at next summer’s Silverstone Classic (21st to the 23rd of July).
To mark this prominent 50th anniversary, the packed programme at the world’s biggest classic motor racing festival will include two special showdowns for Historic Formula Fords in 2017. It’s the first time the hugely popular, entry-level single-seaters have featured on the Classic bill since 2013 and a pair of unsurpassed, full-capacity 54-car grids are expected to serve up a feast of close and exciting racing, a hallmark of the junior formula ever since its game-changing introduction in July 1967.
Back then, the combination of low-cost, lightweight tubular chassis powered by a 1600cc Ford Cortina GT engine made an immediate impact both with rival constructors and the next generation of young drivers eager to impress.
Formula Ford quickly became the first stepping-stone in the early careers of many prospective Formula One drivers. World Champions such as James Hunt, Emerson Fittipaldi, Jody Scheckter, Nelson Piquet, Ayrton Senna, Nigel Mansell, Michael Schumacher, Damon Hill and Jenson Button all cut their formative teeth in the super-competitive world of Formula Ford.
Over the past 50-years, Silverstone has witnessed hundreds of spectacular Formula Ford showdowns, with the circuit’s high-speed layout producing some epic slipstreaming duels between young protagonists. Next summer, the Silverstone Classic will recreate some of those memorable battles when Historic Formula Fords will be among the many on-track highlights.
“We are thrilled to be bringing Formula Ford back to the Classic in 2017 for what will be its biggest 50th anniversary celebration,” said Nick Wigley, CEO of event organiser Goose Live Events. “Formula Ford has played such a major role, in both global motor sport history and the careers of just about every young racing driver, that it has earned its place in history. What’s more, it’s going to be another real crowd-pleaser, with lots of incredible wheel-to-wheel action – something for which Formula Ford racing has always been renowned.”
The two Formula Ford showdowns will line-up alongside those races already confirmed on the 2017 Silverstone Classic bill: Group C prototypes; FIA Masters Historic Formula One and FIA Masters Historic Sports Cars; the International Trophy for Classic GT Cars (Pre ’66); the Stirling Moss Trophy for Pre ’61 Sportscars; the Royal Automobile Club Woodcote Trophy for Pre ’56 Sportscars; the JET Super Touring Car Trophy; the Maserati Trophy for HGPCA Pre ’66 Grand Prix Cars and, of course, the recently announced HRDC Austin A35 Celebrity Race.
In addition, organisers are pleased to announce the return of the Royal Automobile Club Tourist Trophy for Historic Cars (Pre ‘63 GT), Under 2-Litre Touring Cars and Formula Junior to next year’s race programme with more exciting races still to be announced.
Ensuring all visitors can savour the spectacle, the Formula Ford contests will be staged across both Saturday and Sunday and will star cars built and raced before 1972, as featured in the HSCC’s popular Historic FF1600 Championship.
“These are cars from the glorious early years of Formula Ford and they never fail to deliver timeless and thrilling single-seater racing,” said Grahame White, CEO of the HSCC. “Even though we are permitted to start grids of 54-cars on the full Silverstone Grand Prix circuit, we are still expecting to be over-subscribed, such will be the demand to be part of these wonderful races to acclaim 50 years of famed Formula Ford.”
Fomrula Ford Silverstone Classic FF1600