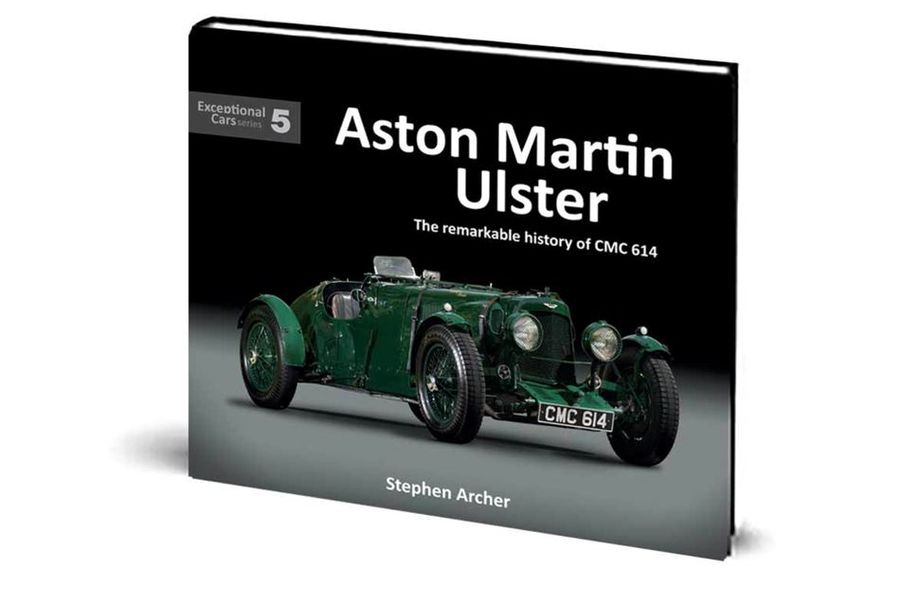 Aston Martin achieved its greatest pre-war racing successes with the 1.5-litre Ulster model and the example carrying registration plate CMC 614 is one of the finest of the 28 surviving today. Recently restored to its 1935 Le Mans specification after more than four decades of post-war track action, CMC 614 is also the most-raced Aston of all time. The fifth title in Porter Press’ Exceptional Cars Series tells the story of this particular car and, more broadly, Aston Martin’s first 20-years.

Early Aston Martins gained credibility and prestige by participating in tough long-distance races such as the Brooklands Double-Twelve, the Le Mans 24 Hours, and the Tourist Trophy on the Ards circuit in Ulster where Aston’s 1-2-3 class success in 1934 gave this model its name. CMC 614 was built to the same specification as the factory team cars and participated in the 1935 Le Mans 24 Hours, Mille Miglia, Tourist Trophy and Targa Abruzzo.

The new publication includes foreword by renowned car collector and former Pink Floyd band member Nick Mason, whose business partnership with long-time CMC 614 owner Derrick Edwards (Morntane Engineering, later Ecurie Bertelli) did much for the renaissance of pre-war Astons, and includes:
- The bumpy ride endured by Aston Martin’s numerous owners and investors during the marque’s first 20-years, when Lionel Martin aimed “to put Great Britain right in the very front as regards light cars”.
- How the Ulster was masterminded by Italian-born, Welsh-raised Augustus Cesare Bertelli (‘Bert’) - who had worked in FIAT’s experimental shop in Turin and served as riding mechanic to Felice Nazarro - and the car’s bodywork was shaped by his coachbuilder-brother Enrico (‘Harry’).
- A detailed technical analysis of the Ulster.

CMC 614 was built in 1935 for Eddie Hall and was supported by Aston Martin and run alongside the team cars ay Le Mans that year, finishing eighth overall driven by Cambridge graduates Maurice Falkner and Tommy Clarke. It then and wong its class (taking third place overall) on the Targa Abruzzo road race, driven by Count ‘Johnny’ Lurani.

The car won more than 600 awards through the ‘60s, ‘70s and ‘80s in the hands of Aston specialist Derrick Edwards. Shortly before American writer and art collector Adam Lindemann sold CMC 614 at RM Sotheby’s auction in Monterey, California, in 2017, he had the car painstakingly returned to its 1935 Le Mans specification. The car’s purchase by Englishman Keith Ashworth has brought it ‘back home’.

Stephen Archer inherited his enthusiasm for and detailed knowledge of Aston Martin from his late father, Alan, who was chairman of the Aston Martin Owners Club. A management consultant and automotive consultant, Stephen has written several books on Aston Martin.