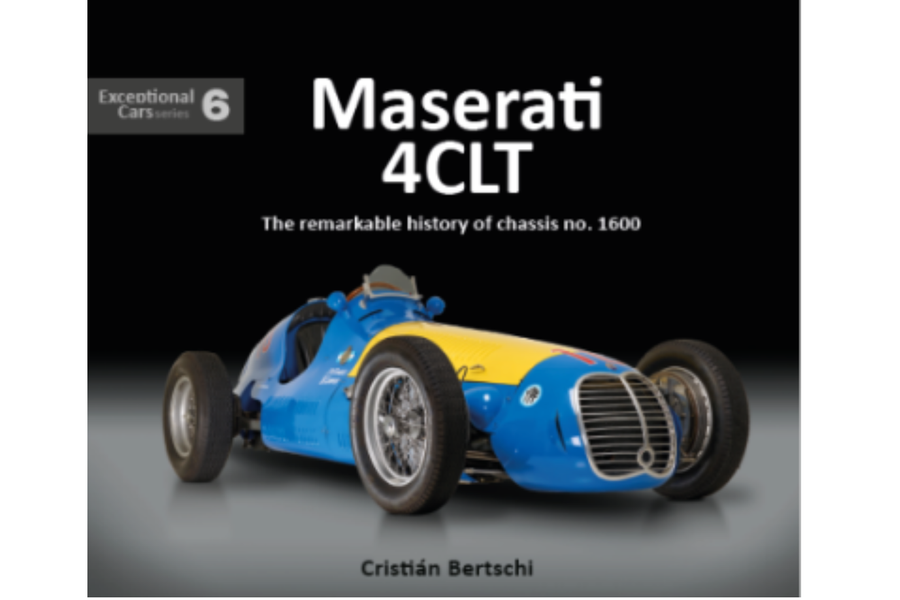 The car that set Juan Manuel Fangio on his way to five World Championships, Maserati 4CLT chassis no. 1600, is the subject of the latest addition to Porter Press’ Exceptional Cars series. Painted in the bright blue and yellow national colours of Argentina, this was one of two 4CLTs bought by the Automovil Club Argentino (ACA) with the support of President Juan Péron to demonstrate the nation’s sporting prowess on the world stage.

For Fangio, the ACA’s plan worked well: after winning two European Grands Prix in 1949 and 1950 in 4CLT serial number 1600, and more in its sister car, he was recruited by the works Alfa Romeo team for the majority of the 1950 season and won the first of his world titles with Alfa the following year.

The 4CLT was introduced in 1948 as a state-of-the-art race car for the voiturette category, its 1491cc four-cylinder engine producing 260bhp with the help of a two-stage supercharger, and proved fast enough to win races when the works Alfa Romeos were absent. On the model’s race debut, at the 1948 San Remo Grand Prix, 4CLT drivers Alberto Ascari and Luigi Villoresi scored a one-two.

Bertschi trained in industrial design and lectured at the University of Buenos Aires until 2000, when he discovered that he could turn his passion for cars and motorsport into a full-time job. He has written for publications such as Het Klaverblaadje, Cavallino and Automobilsport.